Whoever was behind the putsch, the anti-Gülenist purge that followed has been a long time in the making—and will clear the way for an even bigger coup. 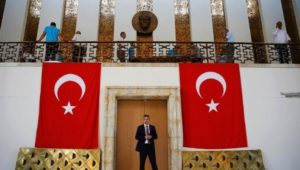 Police officer on guard at the entrance to the main meeting hall of the Turkish Parliament in Ankara on July 19, 2016 (Reuters)

Last Friday’s botched putsch was not the first coup attempt in Turkish history—and nor will it be the last. What happened over the weekend, with the army’s desperate bid to seize control of the state, should be seen as a form of inter-elite blowback to Erdoğan’s quasi-messianic quest for absolute power; a coup within a coup. The defeat of the former now appears to have cleared the way for the latter.

Let’s rewind. The year is 2013 and the wider region is still convulsing from the aftershocks of the Arab Spring. Among the young, in particular, social conditions remain explosive: from the Strait of Gibraltar to the Persian Gulf, the spirit of revolution and insurrection lives on—and even if it does so haltingly, the political mood is still ominous and regional leaders remain on edge.

Not Recep Tayyip Erdoğan. He is “different.” Doggedly determined to press on with his megalomaniacal vision for the wholesale transformation of Turkey into an authoritarian neoliberal-Islamic regional powerhouse, with himself at the helm as the uncontested leader and almighty heir of the Ottoman Sultans, the prime minister will not allow anyone to stand in his way—neither his long-time allies, nor his traditional enemies.

Moreover, he is in too deep. Aided by an enormous credit bubble and the privileges of state power, Erdoğan has already gotten himself, his family and his inner circle deeply wound up in a massive construction boom that dramatically changed the face of Istanbul over the course of the 2000s. Skyscrapers mushroomed across the city’s skyline while hundreds of mega-malls began to dot the urban landscape. Spiffy new mosques and state-of-the-art metro-lines were completed and plans for a third bridge over the Bosphorus and a third airport for Istanbul are already in the making. In this context of explosive economic growth, many in Turkey are swayed into drunken oblivion by the ruling AKP’s potent mix of religious rhetoric and credit-fueled consumerism. But not everyone is equally happy.

When a handful of mostly middle-class protesters gather in a park in downtown Istanbul, naming themselves #OccupyGezi and hoping to prevent the park’s destruction and replacement with yet another planned shopping mall—appropriately themed in the style of the 19th-century Ottoman army barracks that once used to stand on the same grounds—the prime minister clamps down with characteristic bluntness and complete disregard for democratic freedoms or elementary civil rights. The subsequent crackdown sparks a nationwide popular uprising in which dozens of protesters are killed and hundreds wounded at the hands of the state.

Erdoğan is adamant: he will not stand down in the face of “a few looters.” But not all of his political allies are entirely convinced by this ham-fisted approach. President Abdullah Gül and Deputy Prime Minister Bülent Arinç take a considerably more moderate position, emphasizing the right to peaceful protest and calling for a mutually acceptable resolution to the standoff. Erdoğan, of course, will have none of it—and tensions with the moderates begin to rise over the course of the protests.

Then, suddenly, a major crack opens up in the ruling elite: Fetullah Gülen, a reclusive and self-exiled Muslim cleric who as leader of the sect-like Hizmet movement had long been Erdoğan’s most important strategic and ideological ally, openly criticizes the prime minister’s heavy-handed suppression of the protests. Erdoğan, unable to tolerate such insolence, immediately strikes back. Several months later, in November 2013, he begins to shut down Gülen’s main source of income and recruitment: his powerful network of university prep-schools that extends across the nation.

From here on out, things will rapidly spiral out of control. A month later, on December 17, an Istanbul prosecutor rumored to be a follower of Gülen orders a raid on some of the AKP’s leading figures and their business associates. Revealing shoe boxes packed with wads of cash worth many millions of dollars, the prosecutors claim to have unravelled a massive corruption ring around Erdoğan’s inner circle—centered on a gold-for-oil scheme to circumvent sanctions against Iran and, more tellingly, the very construction permits that enabled Erdoğan’s “success story” of the Istanbul real estate boom in the first place.

A visibly wounded Erdoğan takes to the airwaves to denounce this “judicial coup” and the “parallel structure” that Gülen has erected within the Turkish state. Not long after, the government initiates a purge of the police and judiciary, firing thousands of officers and dozens of prosecutors rumored to be affiliated with the Hizmet network. Gülen’s supporters in the police, possibly overplaying their hand now, return fire by releasing recordings between Erdoğan and his son in which the prime minister orders him to get rid of their money—recordings that were disclaimed by the government but never credibly falsified.

What emerged in the wake of the Gezi protests was therefore an intensifying power struggle between what Yasemin Congar has called “an increasingly authoritarian political leadership and its even more nervous rival.” To be fair, though, the origins of the tensions between Gülen and Erdoğan go back much further—to their distinctive approaches to combating the military dictatorships and the secular establishment since the 1970s.

While Erdoğan focused his efforts on building up a political movement that would eventually become the AKP, the Gülenists took a different approach of infiltrating the existing state apparatus and covertly rising to positions of power. For a while, as long as the existence of a common enemy served to obscure some of the ideological differences between their respective strands of Islamism, the two projects were complimentary. Gülen’s financial support was crucial to the rise of political Islam in Turkey, and when the AKP first came to power in 2002, Gülen’s loyalists in the judiciary, police and army helped shield the AKP from counter-maneuvers by the old establishment, the so-called “White Turks.”

But once the army had been tamed and its secular top brass largely defanged following the Ergenekon trials, tensions between the two camps began to rise. At the same time, the fallout of the global financial crisis made it increasingly difficult to inject credit into pre-existing distributional conflicts—both between different social groups and within the elite. As these distributional conflicts intensified across the board, Erdoğan gradually began to see the Hizmet movement as an obstacle to his objectives of concentrating and consolidating ever more power and wealth in his own hands.

The tensions first came to the fore when an allegedly Gülenist prosecutor forced the Turkish intelligence chief, an Erdoğan loyalist, to testify on the peace process with the PKK in February 2012. The order was widely considered an act of defiance on the part of the judiciary against the country’s powerful security apparatus and the “core structure” the AKP itself had built up within the state. From this point on, elements of the state with diverging loyalties would effectively be at war with one another. As Giran Ozcan writes for ROAR, “the period since has been a bare knuckle cage fight.”

It was a fight in which the Gülenists, while strategically positioned within the judiciary, the army and the police, were clearly the underdog. Commanding “only” an estimated 10 percent of support among the Turkish population and lacking an organized political force of their own, an independent electoral challenge to Erdoğan was out of the question. The only way to get rid of the aspiring Sultan and expand their own hold on the state apparatus was to obstruct his plans to rewrite the constitution and create a presidential republic, and to somehow replace him as the leader of the AKP.

It was always a losing position, and this year Erdoğan appeared to be moving in for the kill with the widely anticipated sacking of a large section of the officer corps at an annual committee meeting of the army’s top brass, scheduled for next month. While the government has so far presented no evidence that the plotters were in fact affiliated with Gülen, it is now widely believed that the coup was orchestrated by disgruntled officers who feared being forced into retirement, and who felt compelled to make a premature last stand when they discovered that they were under surveillance.

We may never know to what extent Erdoğan’s conspiratorial accusations about a Gülenist plot against him are true. What is clear, however, is that Erdoğan is already using the failed putsch as a pretext to purge the army, judiciary and state bureaucracy of all Gülen supporters; and indeed of any political opponent alleged to be a Gülen supporter. This move marks a dramatic escalation of the long-standing power struggle between the two men and their respective circles of influence—and quite possibly lauds the bloody final chapter in the dramatic low-intensity civil war between them.

If so, whoever was really behind it and whatever their immediate motivations may have been, Friday’s failed coup attempt may well be remembered as the last spasm of the organized anti-democratic opposition within the Turkish state, before the equally anti-democratic Erdoğan finally seizes the prize he has craved for himself all along: the absolute power of a Sultan and the undivided loyalty of his subjects.

Jerome Roos is a researcher in International Political Economy at the European University Institute, and founding editor of ROAR Magazine. For more on his research and writings, visit jeromeroos.com. 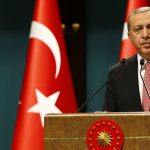 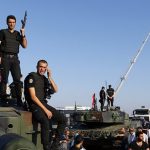 How the military coup in Turkey failedTurkey / Türkiye