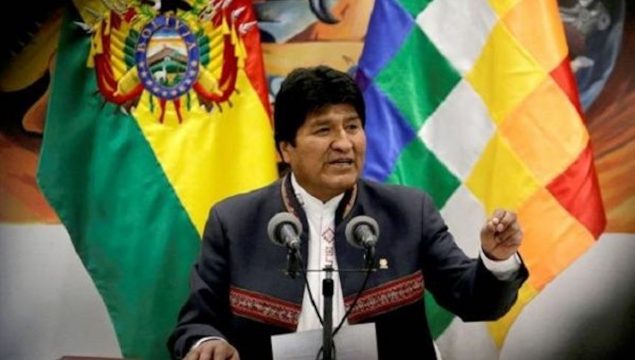 Bolivia’s coup-born regimen led by Jeanine Añez Wednesday issued an arrest warrant against President in exile Evo Morales, who is being charged for alleged sedition and terrorism.

Paradoxically, the right-wing politicians who subverted the democratic order in Bolivia are now accusing Evo Morales of sedition.

Bolivia’s coup-born regimen led by Jeanine Añez Wednesday issued an arrest warrant against President in exile Evo Morales, who is being charged for alleged sedition and terrorism.

The legal document, which was signed by La Paz prosecutors, instructs to “apprehend and lead Mr. Juan Evo Morales Ayma, before the prosecutor’s offices.”

The Movement Towards Socialism (MAS) leader is paradoxically accused of “promoting violent clashes” that left 35 dead and resulted in his resignation.

Confirmed: the de-facto government of Jeanine Añez finally closed 53 community radio stations. The transmission and signal were cut off. Bolivia lives a dictatorship.

This accusation would be based on the existence of an audio in which Morales is supposedly heard ordering the Bolivian people to resist and encircle the cities to overthrow Senator Añez.

The warrant issued by the Bolivian de facto government did not take many as a surprise given that Añez announced an impending arrest warrant against Morales on Saturday.

Nevertheless, the MAS activists and supporters are denouncing this measure against their leader as a lawless attempt to prevent him from returning to his country in the future.

Morales was forced to leave his office on Nov. 10 when the Organization of American States (OAS) mission report questioned the results of the presidential elections, which pave the way to a coup d’etat led by fundamentalist sectors of the Bolivian right.