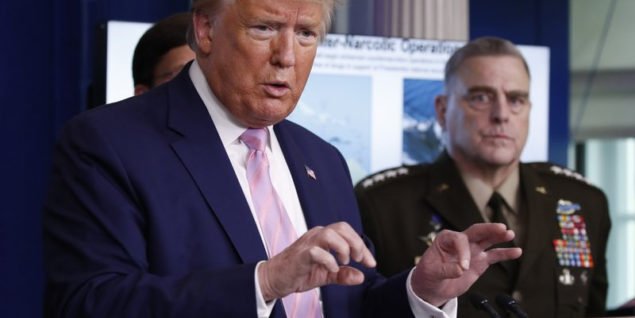 For all their polite critiques of illegal US sanctions and military escalation–whose monstrosity has been laid bare by the current pandemic–the cult of Western exceptionalism goes unchallenged. 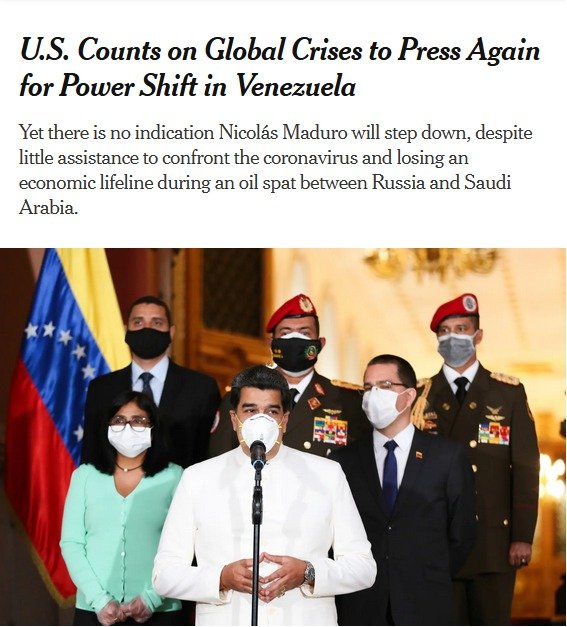 The Trump administration unveiled on March 31 a “democratic transition” plan to remove Venezuelan President Nicolás Maduro from office, in favor of a “council of state” composed of both opposition and ruling party loyalists.

The plan was, however, less an offer to negotiate than a diktat, with the US State Department (3/31/20) vowing that “sanctions will remain in effect, and increase, until the Maduro regime accepts a genuine political transition.”

Despite the obvious mafioso overtones, Washington’s stenographers in the corporate press were quick to present the initiative as “sanctions relief,” once again whitewashing murderous US economic warfare against Venezuela (FAIR.org, 2/6/19, 6/14/19, 6/26/19).

An Offer They Can’t Refuse

The New York Times (3/31/20) jumped at the opportunity to furnish the Trump administration’s plan with a varnish of reasonability. “The proposal…offers to ease American sanctions intended to pressure President Nicolás Maduro and his loyalists over the past year,” Lara Jakes wrote, misconstruing the unilateral measures destroying Venezuela’s economy as well-intentioned steps to bring about “fair elections.”

At no point did the paper of record mention Washington’s threat to ramp up illegal sanctions if Maduro refuses the “offer” to replace his government with a five-person junta, in flagrant violation of Venezuela’s constitution. Other Western media likewise covered up the US blackmail, praising Donald Trump’s bayonet-hoisted ultimatum as a “roadmap to relief” (Washington Post, 3/31/20), a “more toned-down approach” (Reuters, 3/31/20) and a “conciliatory framework” (Economist, 4/2/20).

Having dutifully whitewashed US sanctions, the Times and its counterparts were free to cast war criminal Elliott Abrams, rehabilitated last year as Trump’s Venezuela envoy (CounterSpin, 3/1/19), as an honest broker committed to good-faith dialogue:

But Mr. Abrams was careful to say that the plan was an opening offer for talks between the two sides, “not a take-it-or-leave-it proposition,” and that no single issue was a deal breaker—except the demand for Mr. Maduro’s departure.

By contrast, Maduro—reelected in internationally monitored elections with a greaterpercentage of the electorate than Trump won in 2016, or Barack Obama in 2012—is for the Times “reminiscent of mid-20th century Latin American strongmen,” whose 2018 victory was “self-declared.”

The Times went on to accuse the Venezuelan leader of “creating one of the world’s largest refugee populations,” concealing the role of criminal sanctions in driving migration (FAIR.org, 2/18/18).

This vilification of Maduro and the Chavista poor people’s movement does not merely reflect reporters’ professional class bias, but is structurally necessary to justify US economic warfare and more overt criminality in the first place.

It is therefore no coincidence that the Trump administration’s gunpoint “proposal” to overturn Venezuela’s constitutional order came on the heels of Department of Justice “narco-terrorism” charges against the Venezuelan head of state and other top officials, which corporate journalists trumpeted enthusiastically. 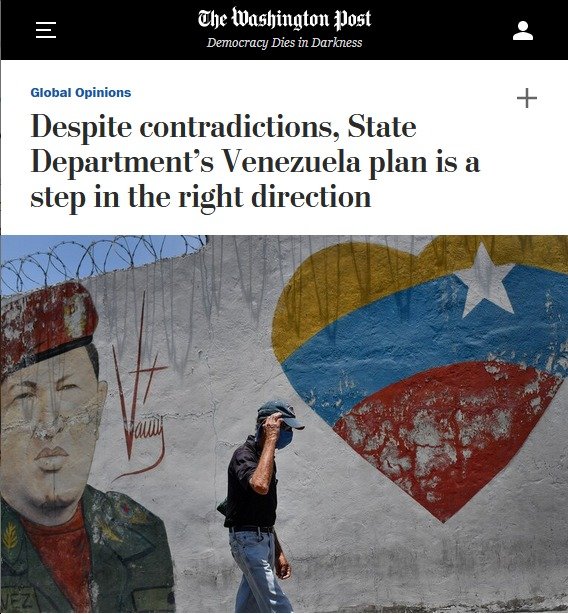 A Washington Post op-ed (4/14/20) says that a US demand that Venezuela’s elected president step down is a “step in the right direction” because it Washington indicates it “will not veto a Maduro candidacy in new national elections.”

Most outlets regarded the timing as a symptom of “contradictory” (Washington Post, 4/14/20) or “erratic” (New York Times, 4/10/20) US policy, which could “make it harder to remove Maduro” (Economist, 4/2/20), but the underlying regime change (ir)rationality never comes into question.

Indeed, even liberal imperialist academics like David Smilde and Abraham Lowenthal (Washington Post, 4/14/20) declined to call for scrapping the indictments, let alone easing sanctions, as a goodwill gesture aimed at securing Chavista support for the US plan, which they hailed as a “step in the right direction.” Rather, they merely recommend that the Trump administration offer “guarantees for indicted officials” against extradition, as if Maduro would be inclined to negotiate while Washington continues its collective punishmentand maintains a $15 million bounty on his head.

Smilde and his Washington Office on Latin America colleague Geoff Ramsey’s  (Washington Post, 3/27/20) refusal to demand the immediate annulment of the drug charges and illegal sanctions is hardly surprising, given both men’s long-running support for US coup efforts (Common Dreams, 3/5/19).

The DoJ’s indictment of 14 current or former senior Venezuelan officials on “narco-terrorism” charges provided the Western media with fresh grist for its imperial propaganda mill. 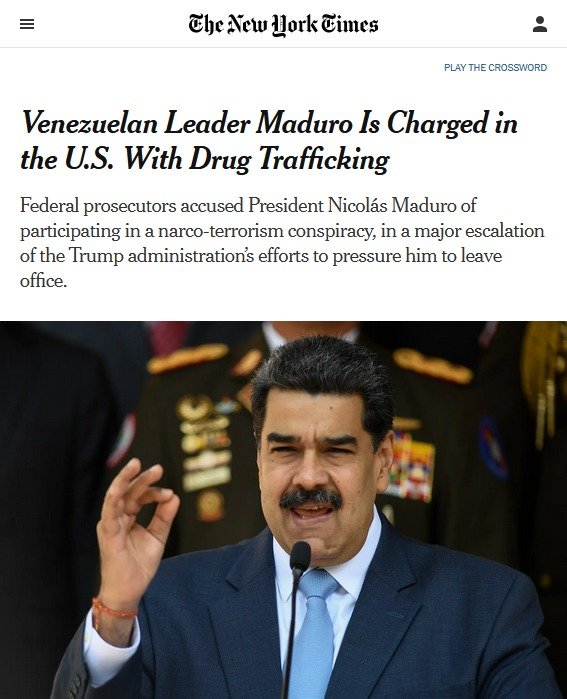 The New York Times (3/26/20) published a credulous report on the indictment of Nicolas Maduro, sourced almost entirely to the US government.

This is hardly the first time that the corporate media have reported the Washington’s evidence-free drug allegations against official enemies, which they have frequently done without any pretense of journalistic rigor (Extra!, 1/90, 9/12; FAIR.org,  9/24/19, 5/24/19).

The New York Times (3/26/20) dedicated no less than 12 paragraphs to repeating prosecutors’ claims, which are centered on the outlandish notion that Maduro secretly heads a drug cartel that conspired with Colombia’s FARC guerrillas to “‘flood’ the United States with cocaine.”

Despite marshaling a crack team of three writers and four contributing reporters, the Timesproved incapable of citing any contrarian perspectives, let alone basic facts, that cast doubt on the “narco-terrorism” narrative.

The Guardian (3/26/20) and the Washington Post (3/27/20) were virtually the only outlets to mention the US government’s own publicly available data showing that just a small fraction of drug routes pass through Venezuela, with the overwhelming majority of cocaine entering the United States via Mexico and Central America. Furthermore, Colombia remains the world’s largest cocaine producer, right under the nose of large US military and DEA contingents, which have long waged a “war for drugs and of terror” in the country. 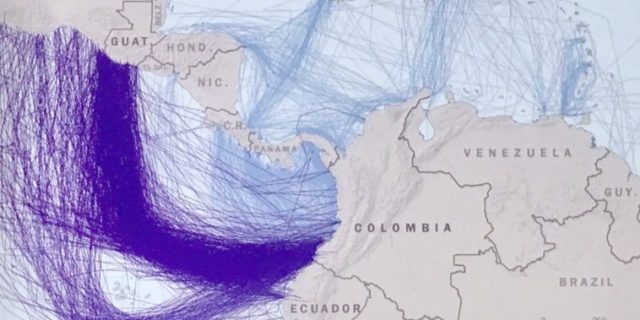 A map produced by the US Southern Command shows the main drug-smuggling routes in Latin America connecting Colombia and Ecuador with Guatemala and Mexico (Business Insider, 9/14/17). Venezuela (and Nicaragua, another official enemy that has been targeted with bogus drug charges) are conspicuous for their relative lack of involvement.

As with prior allegations against Socialist Party Vice President Diosdado Cabello (Wall Street Journal, 5/18/15), the indictments hinge on the testimony of defectors, whose claims are echoed in the Western press without scrutiny.

In the most recent case, retired Maj. Gen. Cliver Alcalá and former intelligence chief Hugo “El Pollo” Carvajal were also charged by the DoJ and pledged to cooperate with US authorities. Both had previously broken with the Maduro government and endorsed self-proclaimed “interim president” Juan Guaidó.

Alcalá, who swiftly surrendered to DEA agents and was flown to the US, boasted of plotting a coup in conjunction with Guaidó and “US advisers.”

In an exposé of the coup plot, the Financial Times (4/4/20) cast doubt on the general’s “rambling and contradictory” account, quoting several US officials denying the coup attempt and alleging Alcalá was “acting on the orders of Caracas.”

The outlet conveniently ignored that this would not be the first time Alcalá conspired to invade Venezuela with a paramilitary force.

According to Bloomberg (3/6/19), there was a plan for the general to lead a contingent of 200 Venezuelan exile soldiers to clear the way for the entry of “humanitarian aid” on February 23, 2019, which was vetoed at the last minute by Colombia, suggesting high-level coordination with Washington, Bogotá and Guaidó.

By repeating the US narrative of Alcalá as a Maduro “plant,” corporate journalists paradoxically legitimize the general as a reliable source of current information on Venezuelan “narco-terrorism,” while concealing his embarrassing ties to the US and its opposition proxies.

As we have exposed for FAIR.org (5/24/19), Carvajal has already proved his worth in the past by serving up to credulous reporters highly dubious allegations about Venezuelan leaders’ Hezbollah ties (New York Times, 2/21/19). 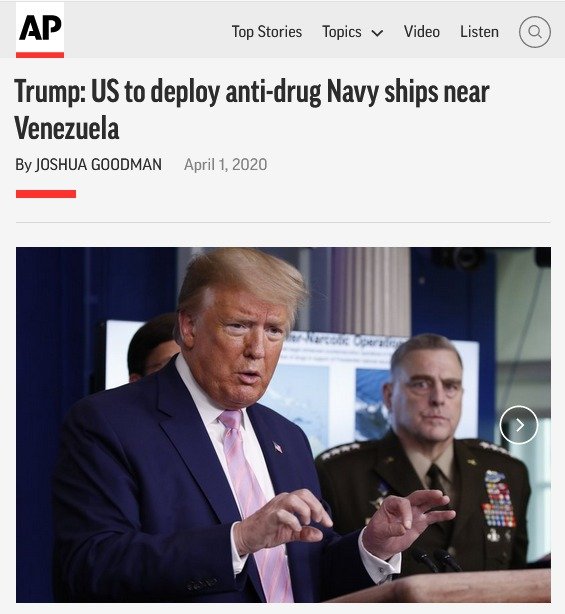 The uncritical coverage of the DoJ charges paved the way for a further US escalation shortly after the “transition” plan was unveiled.

On March 31, the Trump administration announced a military deployment to the Caribbean described by Associated Press (4/1/20) as “one of the largest in the region since the 1989 invasion of Panama.”

One might have expected such an obscenely expensive display of force amid a deadly pandemic currently killing thousands of Americans to be met with widespread rebuke across the media spectrum.

In fact, the opposition was largely muted. Newsweek (4/3/20) and Foreign Policy (4/2/20) gave voice to the Pentagon’s concern that the operation was wasteful and politically motivated, while the New York Times (4/10/20) published an op-ed raising polite proceduralist quibbles.  Agreeing with the Trump administration that Maduro is a “dictator” who “must go,” Michael Shifter and Michael Camilleri nonetheless placed a vague call for Washington “to reboot sanctions policy, provide aid through accountable channels, and press the country’s leaders to work together.” Evidently, demanding the immediate lifting of (arguably genocidal) sanctions was too unreasonable to ask.

Referring to the Venezuelan military as “deeply involved in corruption and criminality,” Shifter and Camilleri exemplify the decadent imperial intelligentsia’s psychology of displacement.

From social democratic left to neoliberal right, Global North journalists and intellectuals remain invested in the self-serving illusion that besieged Southern nations such as Venezuela and Iran are more “criminal,” “corrupt” and “authoritarian” than the US empire (FAIR.org, 2/12/20).

For all their polite critiques of illegal US sanctions and military escalation–whose monstrosity has been laid bare by the current pandemic–the cult of Western exceptionalism goes unchallenged. 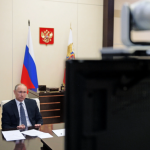 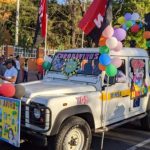