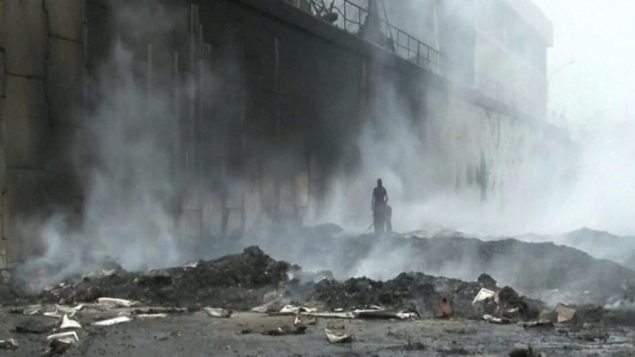 The vast majority of Venezuela’s voting machines were incinerated on March 7 in a fire that engulfed the main warehouse of the National Electoral Council, or CNE, outside Caracas.

The vast majority of Venezuela’s voting machines were incinerated on March 7 in a fire that engulfed the main warehouse of the National Electoral Council, or CNE, outside Caracas. 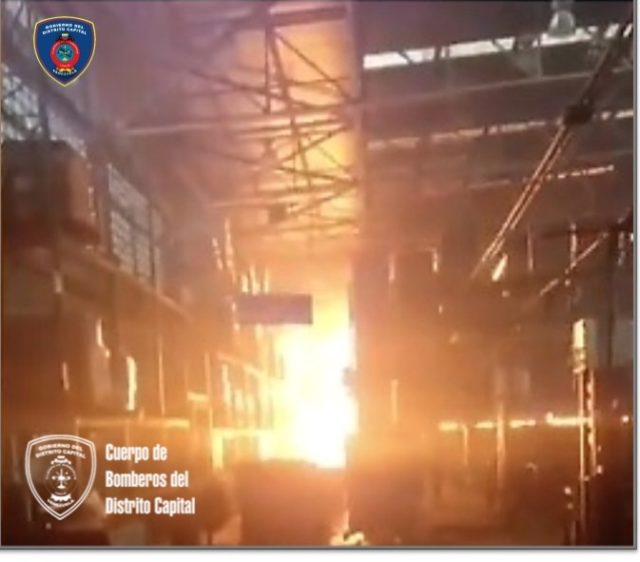 An unknown militant group styling itself the “Venezuelan Patriotic Front” claimed responsibility for the arson attack, which comes as the Maduro government and moderate opposition factions continue high-level negotiations to hold parliamentary elections in a bid to overcome the country’s current standoff.

Given Western journalists’ moral outrage over the dubious allegations of widespread “meddling” in the 2016 US presidential election, consistency would have mandated a similar response to such a brazen attack on Venezuela’s democracy.

Instead, corporate outlets followed the familiar script of blaming the victim, repeating the US State Department talking point that the Venezuelan electoral system is “rigged” (FAIR.org, 5/23/18) and floating outlandish conspiracy theories.

The Fiction of ‘Fraud’

After running through some of the details of the incident, Reuters (3/8/20) stated:

The South American country’s elections have come under heavy criticism since President Nicolás Maduro’s 2018 re-election was widely dismissed as rigged in his favor, leading dozens of governments around the world to disavow his government in 2019. 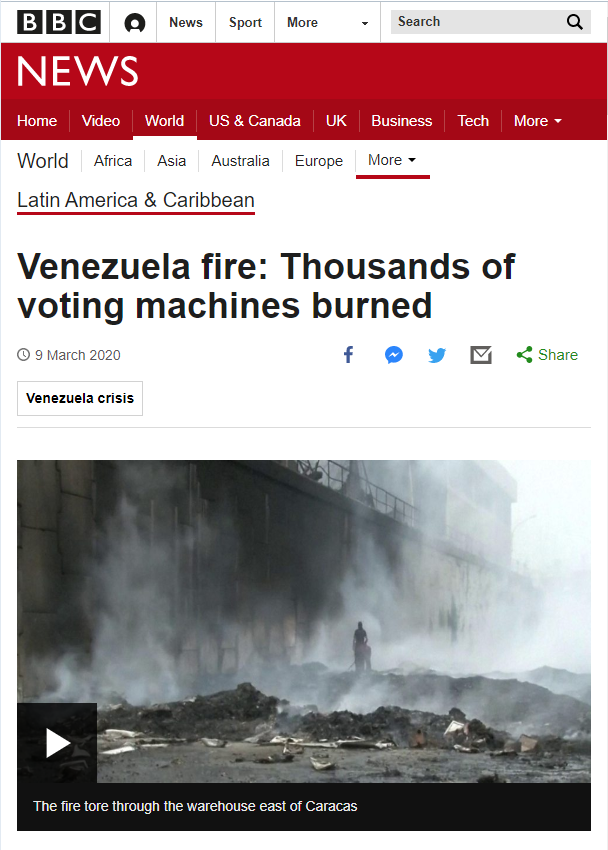 “Why does it matter?” asks the BBC (3/9/20). “Recent elections in Venezuela have been beset by allegations of fraud.”

The BBC (3/9/20) likewise emphasized that Venezuela’s elections have been “beset by allegations of  fraud…[and] vote-rigging.”

The not-so-subtle implication is that the burnt voting machines had previously served as an accessory to the “fraud” perpetrated by the Maduro government.

This is a particularly scandalous suggestion, given that Venezuela’s electoral system, unlike its US counterpart, is one of the most efficient and transparent in the world. Witnesses representing competing political parties—including the opposition—are present at polling stations and are required to sign off on the numerous, publicly available audits realized before, during and after the fully automated process. Indeed, Venezuela is the only country in the world that does an on-the-spot citizens’ audit after voting centers close, in which the electronic tallies of 53% of randomly selected voting machines are compared to the physical receipts printed by those machines and deposited by voters in a sealed box. In 2018, opposition parties representing Henri Falcon approved each and every one of the CNE’s 24 audits, even those carried out after their candidate cried fraud.

AFP (published in France24, 3/9/20), for its part, was more honest. In lieu of repeating the baseless fraud narrative, the agency observed that the CNE “has been the target of opposition criticism in every election,” before going on to quote the council’s president, Tibisay Lucena, denouncing the opposition’s record of electoral violence.

However, like Reuters and the BBC, AFP declined to inform readers that the opposition’s perennial fraud claims—in 2018 as well as in 2017, 2013, 2010 and on multiple other occasions —have been invariably bereft of substantive evidence.

Embarrassingly, with the exception of the Daily Mail (3/10/20), virtually no corporate outlets have reported the crucial plot detail that a hard-right opposition group has claimed responsibility for the attack.

After suppressing this inconvenient fact, AP (published in the Washington Post, 3/9/20) went so far as to promote the opposition’s bizarre conspiracy theory that the fire was a false flag by the Maduro government, quoting no less than two opposition sources: a London-based financial consultant and self-proclaimed “interim president” Juan Guaidó. 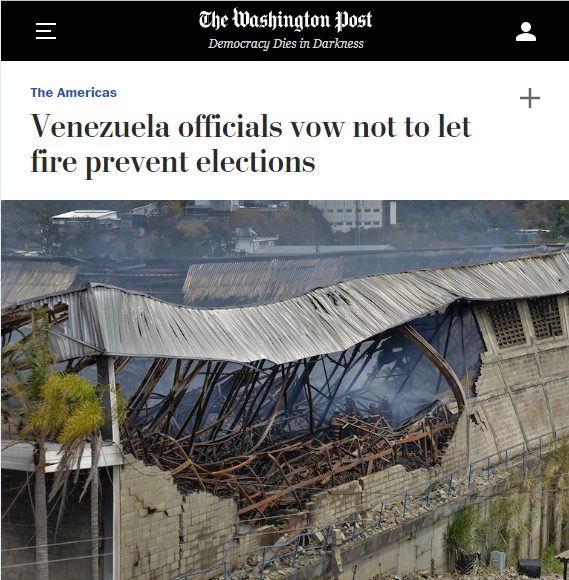 Strangely, the reporter also repeats the narrative that the voting machines are an instrument in the Venezuelan government’s “quest to hold legislative elections this year that could help President Nicolás Maduro consolidate his power.”

It would seem that the reader is expected to believe that Maduro is attempting to convene constitutionally mandated legislative elections in order to “consolidate his power,” while at the same destroying the very means of holding those elections for some unknown reason.

Not only do AP and its counterparts omit anti-government militants’ self-declared responsibility for torching the machines, they also ignore the opposition’s very plausible motives for their destruction: The Venezuelan electoral system’s transparency has been an obstacle to the US-opposition strategy of delegitimizing all Chavista-won elections and paving the way for their coup efforts.

This would not be the first time that the Venezuelan right wing has attacked electoral infrastructure. During 2017 National Assembly elections, the opposition reportedly besieged200 voting centers—a fact ignored by all corporate outlets, with the partial exception of AFP (3/9/20), which quoted a Venezuelan official’s denunciation of opposition electoral violence.

The hardline factions of Venezuela’s US-sponsored opposition have as recently as October (El Nacional, 10/22/19) called for an abandonment of the country’s state-of-the-art automated voting system—which combines rapid electronic transmission of results with the security of publicly audited physical receipts—in favor of more tamperable manual voting.

By omitting these crucial facts, corporate journalists slander Venezuela’s electoral system at the moment that it is under devastating assault. The pretense of earnest concern is easily pierced; their true function is to disseminate US imperial propaganda that Venezuela and its progressive regional allies are not democracies, and therefore legitimate targets for coups, economic warfare and/or military intervention (FAIR.org, 12/10/19, 2/12/20).