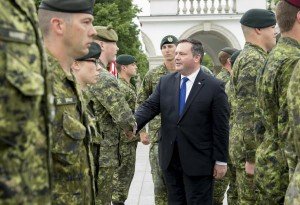 With the U.S. House of Representatives passing a unanimous amendment last week blocking the training of fighters from the so-called Azov Battalion, a notorious paramilitary group in Ukraine, opposition parties are urging the Canadian government to ensure that Canada won’t train them, either.

The volunteer militia uses Nazi-inspired logos and is reputed to recruit neo-Nazi elements. Foreign Policy magazine has reported it is an openly neo-Nazi, fascist group, and a battalion representative told USA Today in March that neo-Nazis comprise 10 to 20 per cent of volunteers.

It is also, however, one of the most prominent militias fighting with the Ukrainian National Guard in eastern Ukraine against separatist groups reportedly backed by Russian money and military equipment.

Ukraine’s interior minister, Arsen Avakov, who oversees its army, said at the end of March that the Azov Battalion was among units to be trained by the US in western Ukraine, according to AP.

About 200 Canadian soldiers are working in a US-led effort to train Ukrainian soldiers in a western Ukrainian town called Yavoriv. The Canadian and American ambassadors to Ukraine reportedly accompanied the Ukrainian prime minister in a visit to troops there at the beginning of June.

His press secretary, Lauren Armstrong, said in an emailed response that “Ukrainian forces are responsible for the screening process to ensure the Canadian Armed Forces will only be training legitimate military members. The first installment of trainees will be members of the Ukrainian Armed Forces (Land).”

Ms. Armstrong added, “we been assured that this group will not include members of the Azov Battalion and this battalion will not be integrated into the Ukrainian Armed Forces.”

‘Right thing to do’

For opposition parties, these assurances may not be enough.

Jack Harris, defence critic for the NDP, said in an interview, “In light of what’s happened in the U.S., I think it’s appropriate for the minister to issue a clarification and we would ask that he make a strong denunciation of any role for Canada in [training that group].”

He said American congressmen can tack on legal conditions to appropriations bills, to “make it clear, send a message on the record,” he said.

“We don’t have a similar mechanism in our Parliament to do that, except to seek the assurance of the minister.” Mr. Harris said opposition parties would have an opportunity to question Mr. Kenney at the defence committee Wednesday.

Liberal defence critic Joyce Murray told Embassy the US amendment “was a cross-partisan initiative and the right thing to do.” She said she wants Mr. Kenney to “make sure that this openly neo-Nazi Azov Battalion does not receive any Canadian government equipment or aid or training.”

The minister needs to demonstrate or show that his commitment is being honoured, beyond just stating that he has assurances, she said. “I’d like the minister to tell us how he can be sure that this group will not be receiving Canadian support. What kind of accountability is there?”

“It’s a very fair question,” Elizabeth May, leader of the Green Party, said. “Who are we training, and do we know for sure that it doesn’t include this quite appalling neo-Nazi paramilitary group?”

Ms. May noted that bipartisan votes in the U.S. are rare. “Canada should be taking note of this,” she said. Russian aggression in Ukraine is illegal, she argued, but the fact that neo-Nazi forces are fighting to push back Russian aggression creates more risk for the region.

Comparing the situation to Libya, she said, “we should’ve learned a lesson to be aware and alert of the risks of unintended consequences.”

She said decisions about Ukraine should be debated in the House of Commons instead of coming directly from the Prime Minister’s Office. “Canada under Harper has started being extremely reckless in our foreign policy, by taking sides in conflicts when we don’t understand, really, whose side are we on here?”

Republican congressman John Conyers put out a press release Thursday thanking the US House for passing his amendment to this year’s defense appropriations act “to ensure that our military does not train members of the repulsive neo-Nazi Azov Battalion.”

Dominique Arel, chair of Ukrainian studies at the University of Ottawa, told Embassy, “I can’t see Canada training that battalion if the US doesn’t…When it becomes known that the US has just passed that particular resolution, I just can’t see Canada going ahead and ignoring what the Americans are doing.”

He said Azov is one of about 70 militias operating alongside the Ukrainian army. It’s not the only one with neo-Nazi ties. But it has been a crucial force on the front line of the conflict.

“Ukraine cannot afford to let go of that force right now,” said Mr. Arel. “It’s pretty critical in the current configuration…Ukraine could live without a battalion with neo-Nazi insignia. But in reality, the situation on the ground, they can’t really afford that.”

A boldly-worded report from Global Research by University of Ottawa professor Michel Chossudovsky claims Canada is training neo-Nazis and nobody is talking about it because the rhetoric surrounding the conflict has been of the black and white, us-versus-them variety.

For Mr. Arel, reports of neo-Nazi troops operating on the Ukrainian side of the conflict play into the Russian narrative. He says painting all Ukrainian troops with the same brush is “completely ludicrous,” but it can’t be denied that some small number of people fighting for Ukraine are of white supremacist ilk.

According to a Pew Research Centre survey released last week, 44 per cent of Canadians agree NATO should send arms to Ukraine and 75 per cent believe that Western countries should send economic aid to the country.

Note by New Cold War.org editors:
The Toronto Star and the Globe and Mail published articles earlier this year in support of fundraising in Canada for Ukraine’s extreme-right paramilitary battalions. So far, they are not reporting on the decision of the U.S. Congress on June 11 to deny training and equipping to the Azov Battalion.

The news service of the Canadian Broadcasting Corporation is similarly silent on the U.S. Congress vote. No wonder. For the past 14 months, CBC has been dutifully parroting the version of events in Ukraine which posits a “Russian invasion” of eastern Ukraine and a “Russian annexation” of Crimea. For the CBC, the war by Kyiv on the east of the country and the prominent role of far-right battalions and leaders in that war is an uncomfortable truth that is best censored out of the news. 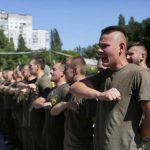 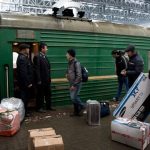