IMF now admits original aid plan has failed. Has been forced to get behind the more generous Soros Plan. Question is, can it work without Russia? 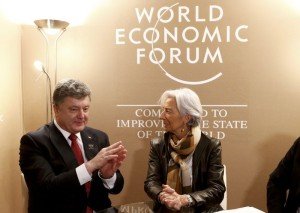 Lagarde, head of the International Monetary Fund (IMF) meets with Ukrainian President Poroshenko in the Swiss mountain resort of Davos

As the article below from the Financial Times shows, in the face of pending default, the West has finally given up on the financial plan for Ukraine it drew up last year.

Briefly, a few weeks ago the Ukrainian government and the IMF admitted that Ukraine needed another $15 billion to get through the next few months. Attempts to find this money with the western governments have proven unsuccessful.

The European Commission has proposed the EU give Ukraine a further 1.8 billion euros. This has not yet been approved by the European Council (the EU’s highest body) where the proposal is likely to meet resistance.

In proposing it, the European Commission has said it is as far as the EU can go. A larger amount would drain the EU’s reserves to dangerous levels leaving them short in the event of a crisis.

Lastly, Germany is providing Ukraine with 500 million euros, but this a ring fenced loan for rehabilitation of the eastern Ukrainian regions devastated by the war and cannot be used for the benefit of the Ukrainian economy as a whole.

These sums come nowhere close to the $15 billion the IMF says Ukraine needs.

With default looming the US financier George Soros flew to Kiev and has come up with a plan. This calls for the IMF to drop its existing plan and come up with a new more generous one. At the same time Ukraine’s private western creditors are supposed to voluntarily agree to a cut back or a “haircut” on their loans. [See George Soros’ essay in the Feb. 5, 2015 print issue of the New York Review of Books, arguing for mail bailout money for Ukraine and continued sanctions on Russia.]

Christine Lagarde, the head of the IMF, says she in principle supports this plan. The details will be worked out over the course of further negotiations that will drag on through January and February.

The first point to make about this plan is that it is an admission that the IMF plan decided on last spring has failed. Many commentators such as Eric Kraus and Elliott Auckland, who both write for Russia Insider, always predicted that it would. That is now official.

The second point is that this plan looks like a complicated way to avoid talking to Ukraine’s biggest creditor, which is Russia. Attempts by the US and the UK governments to find a way for Ukraine to default “legally” on its Russian loans have failed following legal advice that it can’t be done.

Since neither the Ukrainians nor the Western powers want to talk to the Russians about a formal debt restructuring of Ukraine’s debts, they seem to be trying to get around this by adopting Soros’s plan of increasing the amount of IMF lending to Ukraine whilst getting Ukraine’s private western creditors to take a bigger hit than they would otherwise have done.

The third point about this plan is that if the Russians are not party to it, then the amount Ukraine owes the Russians is unchanged and the Ukrainians must pay the Russians the same amount they pay now, as the loans say.

It will be interesting to see whether Ukraine’s private creditors agree to the sort of voluntary haircut they are being asked to make. Many of them may not be happy to agree to a haircut so that Ukraine and its Western supporters don’t have to talk to the Russians.

They may very well balk at a plan whose effect would be to privilege loans Ukraine owes Russia over loans Ukraine owes them. No doubt there will be a lot of arms twisting to get them to agree but it is likely the negotiations will be tough.

More to the point is how the Russians will react to all this. Over the last few weeks, they have pointedly reminded everyone that the $3 billion loan they extended to Ukraine at the beginning of last year is now due and that Naftogaz, Ukraine’s national gas company, owes them $2.4 billion.

They have also said that on 1st April 2015, the discount on the price of gas Ukraine currently gets from Russia will end. Following a cabinet meeting on 21st January 2014, Russia’s Prime Minister Dmitry Medvedev pointedly said Russia is not prepared to go on supporting Ukraine’s economy indefinitely.

In a sense, the Russians stand to come out of this well whatever happens.  Since they are not being asked to agree to a haircut, as Ukraine’s biggest creditor if the IMF steps up financial support to Ukraine, a lot (perhaps most) of the money will end up in Russia.

There has to be a question however about how realistic this plan is. Russia is Ukraine’s biggest creditor and key trading partner. It is Russia that currently supplies Ukraine with the gas, electricity and coal Ukraine needs to survive. The previous IMF plan failed precisely because it did not involve Russia.

Refusing to talk to Russia makes no economic sense. As the situation in Ukraine worsens over the coming weeks it may prove impossible to avoid talking to Russia to get Russia’s agreement to a debt restructuring if there is to be a realistic chance of Ukraine avoiding default. That is the reality, however disagreeable to some in Ukraine and the West it may be.

Ukraine is seeking a larger and longer-term bailout programme from the International Monetary Fund to replace its existing deal and is to launch consultations with sovereign bond holders — usually code for a debt restructuring.

The IMF has identified a $15bn gap in Ukraine’s finances for this year after a $17bn bailout that Kiev agreed last May — topped up to $27bn with contributions from other donors — proved insufficient. The IMF has struggled in recent months to raise funds from donors to help Ukraine plug the $15bn hole.

If the new facility is approved by the IMF board, it will supersede the existing programme and give Kiev’s government more time to start delivering structural reforms.

After meeting Ukraine’s President Petro Poroshenko in Davos, Christine Lagarde, IMF managing director, said the Kiev authorities had requested a “multi-year arrangement with the Fund, supported by the Extended Fund Facility”. The EFF is a longer-term arrangement than Ukraine’s existing Stand-By Arrangement. It also has longer repayment terms of up to 10 years.

Ms Lagarde told reporters she would submit Kiev’s request to the IMF’s executive board, which would “convene as soon as possible. I will propose to support it,” she said.

“The IMF and western bilateral creditors probably were not able to bring enough new money to the table, hence the move to try and talk to private sector creditors about ‘reprofiling’, and sharing the burden a bit,” said Tim Ash, emerging markets economist at Standard Bank. “The operative word there is ‘a bit’ . . . let’s see how painful, or otherwise this will be.”

Ukrainian bonds have weakened as fighting has intensified in recent days in eastern Ukraine, and investors have worried that any new IMF package would require some form of debt restructuring. They fell to record lows on Wednesday.

Prices for the 2017 bond have almost halved since last summer, as Ukraine’s central bank reserves slump, casting doubts over the country’s solvency.

“On one hand the announcement from Kiev is positive because it suggests a resolution, but on the other it means an investor loses money,” he said. “No one knows what the final offer might be for investors, whether a haircut on the bonds or a moratorium on interest payments or an extension of the maturity. The danger, of course, is that, whatever it is, it’s not enough for the country.”

One of the investors to which Ukraine will be talking is Franklin Templeton, the US fund management house, which holds substantial quantities of Ukraine’s debt. Most of it is in vehicles owned by Michael Hasenstab, who previously made a successful contrarian bet on Ireland in the midst of the eurozone crisis.

People familiar with the talks suggested the IMF had insisted that Kiev had to announce a consultation with bondholders.

Ms Jaresko said the IMF request would “provide the financial support Ukraine requires to jump-start its economic recovery while yielding acceptable outcomes for all of our stakeholders”.

George Soros, the billionaire investor who had called this month for the west to grant a $50bn support programme for Ukraine, said in a statement he was “encouraged” by Kiev’s request for an extended IMF facility. He said it would “give Ukraine resources to fend off Russia’s attempts to create financial havoc and help Ukraine reform its economy”.

“This should give confidence to private bondholders to be flexible with Ukraine. If all creditors underwrite the government’s radical reforms, it is an investment that will pay off for them,” he said.

IMF officials had been in discussions in recent weeks with the EU, US and other countries and institutions, such as the World Bank and the European Bank for Reconstruction and Development, to secure more help for Ukraine.

But it was unclear what help would be forthcoming, largely because many donors remain wary of Kiev’s commitment to reforms and the enduring power of vested interests on the ground to block needed changes to the economy. Some had questioned whether the funding gap could be larger than the $15bn identified by the IMF.

According to an IMF spokeswoman, the terms of the new facility and the required reforms will be negotiated by an IMF mission now on the ground in Kiev. It was due to wrap up its work at the end of this month but now may be extended into next month to hash out the terms with the government in Kiev before presenting it to the IMF board. 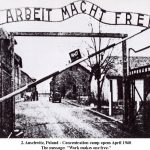 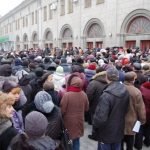