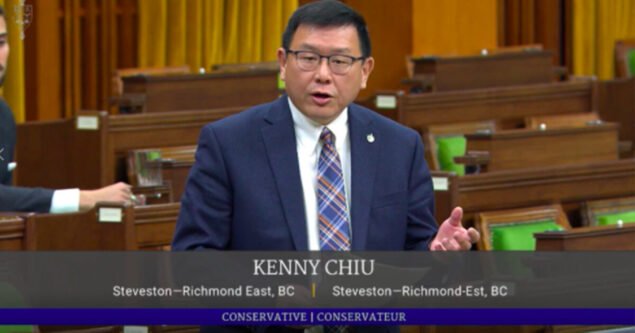 Conservative candidate Kenny Chiu (Steveston-Richmond East) is crying foul over his failure to retain his seat in the September 20, 2021 elections. Reminiscing of the era of McCarthyism, Chiu labels those who opposed him as sympathizers of the Communist Party of China and he attributes his defeat to their influence.

Conservative candidate Kenny Chiu (Steveston-Richmond East) is crying foul over his failure to retain his seat in the September 20, 2021 elections. Reminiscing of the era of McCarthyism, Chiu labels those who opposed him as sympathizers of the Communist Party of China and he attributes his defeat to their influence. He gained a more than willing conduit for his views in the mainstream media in the form of Tom Blackwell, who reports for the National Post. His efforts and those of the media could be seen as attempts to intimidate those who criticize Chiu and his efforts in stoking the “red-scare.”

Chiu, 56, immigrated from Hong Kong to Canada in 1982. Like many Hong Kongers of his generation and class outlook, he is conditioned in the British neo-colonial concepts of western democracy. He was elected to Parliament in the 2019 elections. On April 13, 2021, Chiu introduced in Parliament a private member’s bill, C-282, “An Act to establish the Foreign Influence Registry.” This proposal patterns itself after similar legislation in the United States and Australia. C-282 would mandate “the creation of a Foreign Influence Registry to hold returns filed by individuals and entities that operate on behalf of foreign governments and political organizations to influence Canadian policy processes.”

In a review of the bill in Policy Options by Tarun Krishnakumar, July 12, 2021, C-282 “applies only to an extremely narrow slice of the overall influence and interference spectrum identified by agencies including the Canadian Security Intelligence Service (CSIS).” This is like the wolf guarding the sheep and opened to abuse.

The Chinese Canadian community quickly mobilized to oppose this bill and worked to defeat Kenny Chiu. In normal times, this would be seen as an open democratic process where the people organize against unpopular measures of an unpopular politician. However, the National Post writes “due to a private members bill critical of China that Conservative Kenny Chiu introduced last April, he was hounded by supporters of the Chinese Communist Party during the federal election.”

Here is what happened, as it usually happens in elections.

Using the medium preferred by Chinese immigrants, the Chinese language WeChat came alive with critical comments of Kenny Chiu and his private member’s bill. WeChat is like Twitter and Facebook combined.

According to a posting in WeChat, “This bill is going to have extremely negative consequences for immigrants from mainland China. It will also harm economic, cultural and technological exchanges between Canada and China.” The post continues, “Although the bill doesn’t list which countries belong to the foreign forces, considering the soured relationship between Canada and China…(and Chiu’s) anti-China background, undoubtedly this bill is targeting mainland Chinese associations and aims to control or monitor mainland Chinese speech and behaviours.” The proposed bill would have a dampening effect on democratic speech and organizing in the Chinese Canadian community, especially for those who are sympathetic to China and would open the community to the whims of government and CSIS to determine what is foreign influence.

In his defense, Chiu says, “I need to speak up as an elected official of the Canadian people. I have an obligation to uphold the Canadian core values of freedom, democracy and the rule of law.

The headline in an article (Sept 23, 2021)  by the usually anti-China South China Morning Post read, “Conservative vote plunged in Canada’s most Chinese electorates. Did party pay price for tough stance on Beijing?” The SCMP goes on to say, “Ousted MP Kenny Chiu says doors were shut in his face and some supporters abandoned him over ‘half-truths’ and ‘lies’ about his positions on Hong Kong and China. A second Tory (Alice Wong, Richmond Central) also faces defeat in Richmond, Canada’s most Chinese city, after a huge drop in support that contrasted with the national vote”

A former Minister in the Ontario Liberal government, Michael Chan wrote in the Chinese Language 51.ca “that once Canada-China relations get out of control, the Chinese community in Canada will bear the brunt.” This is a warning to all Canadians, as bill C-282 could be reincarnated in a future date by another MP, or even by the government. As Steve Lalla wrote in Canada Files, the political elite is stoking anti-China hate. This will have detrimental effects on the Chinese Canadian community as we’ve already witnessed in the 62 years of state racism of the Head Tax and Chinese Exclusion Act. More than ever, we need the solidarity of fair minded Canadians to beat back the current virulent wave of Sinophobia which has the toxic mix of the “Yellow Peril” with the “Red Scare.”

William Ging Wee Dere is the author of the award-winning “Being Chinese in Canada, The Struggle for Identity, Redress and Belonging.” (Douglas & McIntyre, 2019). He was a political organizer and a leading activist in the 2-decade movement for redress of the Chinese Head Tax and Exclusion Act.