By New Cold War
Posted July 21, 2016
In Ukraine
Conference in Donetsk caps campaign appealing to international community to stop Ukraine’s war in Donbass2016-07-212016-07-21https://newcoldwar.org/wp-content/uploads/2020/05/2020-NCW-Logo-New.pngNew Cold War: Know Betterhttps://newcoldwar.org/wp-content/uploads/2016/07/Aleksandr-Zakharchenko-speaking-to-conference-in-Donetsk-on-July-19-2016-DNR-Online-video-screenshot.jpg200px200px
Text of speech by Aleksandr Zakharchenko, published in Russian and in English on DNR Online, July 19, 2016  (with video of speech)
On July 19, parliamentary hearings on the topic of ‘Progress in realization of the complex of measures on the implementation of the Minsk agreements, approved by Resolution 2202 (2015) of the 7384th UN Security Council meeting’ took place in Donetsk. The official website of the Donetsk People’s Republic reported on the hearings. 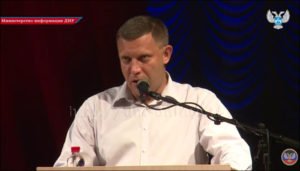 The first minister of the DPR, Alexander Zakharchenko, took part in the event. In his speech, he emphasized the importance of assistance from the international community in stopping the genocide against  the people of Donbass unleashed by the Kiev authorities.

“Today we are summing up the results of the signatures collected on the Petition concerning the nonfulfillment of the Security Council resolution by Ukraine. More than 300,000 residents of the DPR supported this appeal.
“We have shown the international community our willingness to implement the Minsk agreements and to end this conflict. Donbas residents say ‘no’ to violence. We did not start the war, did not shell peaceful towns with aviation and artillery, we just wanted to live according to conscience and justice. Unfortunately, the Kiev government has for almost two years sought to sabotage the implementation of the complex of measures of the Minsk ceasefire process approved by the UN Security Council. Through this petition, we are one more time saying that no terrorists or separatists live here in Donetsk, only ordinary people building their own state. We will end the war and for sure will win because we fight for the future,” the Head of Republic said.
On February 12, 2015, the complex of measures for the implementation of the Minsk ceasefire agreement was signed in Minsk, Belarus. The agreement was signed by the members of the Trilateral Contact Group – former ambassador of the OSCE, Heidi Tagliavini; the second President of Ukraine, Leonid Kuchma; and the Russian Ambassador to Ukraine, Mikhail Zurabov. Also signing were leaders of Donetsk and Lugansk People’s Republics, Alexander Zakharchenko and Igor Plotnitskiy, respectively.
Five days later on February 17th, the UN Security Council unanimously passed a resolution to approve the Minsk document. However, despite its commitments, Ukraine has continued to systematically attack and bombard peaceful areas of the Donetsk and Lugansk People’s Republics.
On June 1, 2016, First Minister Alexander Zakharchenko announced the beginning of the collection of signatures for a petition concerning the nonfulfillment of the UN Security Council Resolution by Ukraine. By this petition, the people of Donbass are appealing to international organizations to stop the genocide of the residents of Donetsk and Lugansk republics being inflicted by the Ukrainian authorities and to stop military operations in the country. The appeal was signed by more than 326,000 citizens. The collecting of signatures in Donbass is officially completed.

The text of the Minsk-2 ceasefire agreement is here. 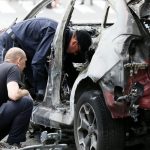 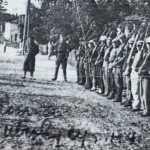 Ukrainian Holocaust perpetrators are being honored in place of their victimsUkraine