By New Cold War
Posted May 6, 2016
In Ukraine
Commentary: Why Ukraine’s NATO membership is not in America’s interests2016-05-062016-05-06https://newcoldwar.org/wp-content/uploads/2020/05/2020-NCW-Logo-New.pngNew Cold War: Know Betterhttps://newcoldwar.org/wp-content/uploads/2016/05/Ukraines-Foreign-Minister-Pavlo-Klimkin-L-with-Belgian-Foreign-Minister-Didier-Reynders-Eric-Vidal-Reuters.jpg200px200px

Note by New Cold War.org editors: We disagree with everything in the description of the situation in Ukraine and Crimea written by the writer of the following article. We post the article for the information of readers because it provides insight into the mindset of pro-NATO ideologues who rise above simple, knee-jerk militarism when formulating policy.

The United States-Russia relationship is already in bad shape, and U.S. diplomats are hurting it further by sending conflicting messages about Ukraine’s future relationship with NATO. 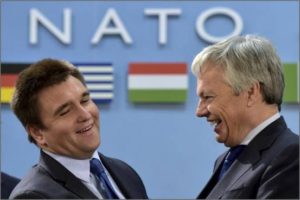 First, NATO and Kiev signed a letter of intent in February for cooperation between their special operations forces. Two months later American ambassador and current NATO Deputy Secretary-General Alexander Vershbow said it was time to bring the Ukrainian military “in line with NATO standards.” Barely one week later, though, the U.S. Ambassador to NATO ruled out NATO expansion for the “next several years.”

These muddled messages only cause confusion, provoking Russia while potentially false hope for Ukraine. For that reason, it’s time for Washington to make clear that Ukrainian accession to NATO is not on the table. Here’s why.

First, NATO possesses almost no ability to defend Ukraine. Russia has 270,000 troops and 700 jet fighters positioned on Ukraine’s southern and western borders. And as Russia demonstrated in 2015 when it sent 150,000 troops to surround Ukraine [sic], Moscow can quickly mobilize its military in the event of a conflict.

Crimea, meanwhile, became a Russian fortress after its annexation. Moscow has fortified the peninsula with 25,000 troops, numerous ships and subs, as well as its lethal S400 air-to-ground missiles — a weapon which could shoot down multiple NATO jets up to 250 miles away. Moreover, as Russia’s recent Syrian campaign demonstrated, its military now possesses the same type of advanced precision targeting cruise missiles used by the United States, providing yet another weapon Moscow could deploy against NATO if a war around Ukraine and the Black Sea broke out. Finally — and perhaps most troublingly — Russia even claims the right to deploy nuclear weapons to Crimea.

Given the massive military force Moscow can bring to bear around Ukraine, any American strategist advocating inviting Kiev into NATO should answer some difficult military questions:

Recent war games revealed NATO would lose a war in the Baltics to Russia within 36 to 60 hours, and it’s hard to envision anything other than a similar outcome in Ukraine.

In addition, Washington confronts not only significant military obstacles in defending Ukraine, but also faces a significant gap between the Russian and American stakes in the country. As Putin’s invasion [sic] of Crimea and subsequent escalation [sic] in eastern Ukraine showed, Kiev’s geopolitical orientation is a supremely important national interest for Russia. By contrast, U.S. President Barack Obama’s unwillingness to supply Ukraine with lethal arms, much less deploy combat troops to Ukraine, indicates Washington’s interests are peripheral at best.

To understand why this is the case, those who want Ukraine to join NATO should go back and read Russian President Vladimir Putin’s March 18, 2014 speech announcing the annexation of Crimea. Arguing that Russia was forced to annex Crimea to forestall the possibility of Ukraine joining NATO, Putin asserted that the West “had lied to us many times. This happened with NATO’s expansion to the East… NATO remains a military alliance. I do not want to be welcomed in Sevastopol by NATO sailors.”

Putin’s words are not mere rhetoric. The West long underestimated the deep humiliation felt by Moscow as a result of NATO expansion toward Russia’s borders in the decades after the fall of the former Soviet Union, and even the United States Navy’s top commander in Europe admits Russia views NATO as an “existential threat” today. To make a historical analogy, Russia views NATO membership for Ukraine similarly to how U.S. President John F. Kennedy viewed the deployment of Soviet missiles to Cuba in 1962. Given that NATO was — and remains — a military alliance directed against Russia, dismissing Moscow’s feelings on this subject as merely “paranoia” is too simplistic.

Proponents of Ukraine’s NATO membership argue Russia must not receive a veto over Ukraine’s geopolitical orientation. Morally this is correct — especially considering the fact that Putin’s annexation of Crimea was a clear violation of international law. Moreover, Ukraine’s decision to officially identify Russia as an enemy is the right one, and it’s easy to see why Kiev would want American assistance in its ongoing struggle with Moscow.

The United States, though, also receives a vote on NATO expansion, and no matter how much the United States may admire post-Maidan Ukraine’s willingness to change its trajectory, before entering into any military alliance Washington policymakers should always ask themselves the following question: Will this commitment increase or decrease the United States’ national security? Absent Washington’s willingness to play a game of nuclear chicken with Moscow, Ukraine’s accession to NATO weakens American national security rather than enhancing it.

To be clear, none of this means the United States should provide Russia a complete veto over Ukraine’s future, and Ukraine must remain free to develop any economic relationship with the West it wishes. Kiev already signed an Association Agreement with the European Union, signifying a long-term commitment to Ukraine’s economic integration with Europe, and Washington should push the Europeans to place full EU membership for Kiev on a fast track.

Furthermore, the West should continue its ongoing non-military support for Ukraine. Politically, Western sanctions on Moscow should remain in place until Russia honors the Minsk II agreement by withdrawing its troops from the Donbass region and ending military support for the separatists. While Crimea almost certainly remains lost to Ukraine, the West must not recognize the peninsula is part of Russia absent a mutually satisfactory solution on Crimea directly between Moscow and Kiev. The United States employed the same policy during the Cold War towards the Soviet Union’s annexation of the Baltic states, meaning precedent for this approach exists.

The West should also continue to support Ukraine financially, especially its brave civil activists determined to break the grip of Kiev’s predatory officials. In addition, while President Barack Obama rightly resists sending billions of dollars of lethal arms to Ukraine, Washington should continue shipping non-lethal aid. Finally, the United States and its European allies should significantly increase humanitarian aid to Ukraine as Kiev struggles to feed and care for the millions of internal refugees victimized by the war in the Donbass.

Located astride a giant neighbor, Ukraine is a classic victim of Robert Kaplan’s “revenge of geography.”Trying to solve this problem for Kiev by inviting it to join NATO is not in American national interests. But while the United States should rule out NATO membership for Kiev, it need not abandon Ukraine to its fate.

(Josh Cohen is a former U.S.AID project officer involved in managing economic reform projects in the former Soviet Union. He tweets @jkc_in_dc The opinions expressed are his own.) 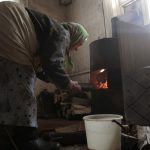