Commentary from Canada: Why is the West spoiling for a fight with Russia?

What are the consequences when elected governments make policy based on faith and imperial hubris instead of science and expertise? It’s a question that is forcing itself on the world as we watch the United States, Britain, NATO and the Harper [Canada] government continue to up the ante in the confrontation with Russia over the Ukraine. There are real enough geo-political dangers in the world without actually creating them out of arrogance and ignorance but that is where we are right now and the consequences could be catastrophic. 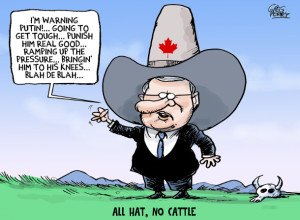 Cartoon by Greg Perry, in The Tyee

Canada, Britain, the U.S. and the boys with their toys in NATO headquarters are looking for a fight with Russia. Throughout the confrontation and provocations these protagonists treat Russia as if it is some insignificant middle power that can be provoked with impunity. That is just dangerously stupid and stupidity is something the West can ill-afford given all its internal problems — economic stagnation, unsustainable inequality, collapsing infrastructure.

It is almost a truism that most politicians are, if not stupid, then woefully uninformed about the myriad of complex issues they have to deal with on a daily basis. Traditionally (going back millennia), it has been the job of the civil services to make them look smarter than they are — and they do that by rooting public policy in science and history. It is the job of professionals to bring to bear all the facts, nuances and consequences of policy initiatives. This is especially true of foreign policy and the nuanced determination of the national interest.

As I watch the Ukraine/Russia disaster unfold I am reminded of George W. Bush’s approach to formulating foreign policy. It was revealed in an article by Ronald Suskind in the New York Times magazine in April 2005. It was titled “Faith, Certainty and the Presidency of George W. Bush” and in it, Suskind quoted an unnamed aide to George W. Bush (later revealed to be the sinister Karl Rove). He wrote:

The aide said that guys like me were ‘in what we call the reality-based community,’ which he defined as people who ‘believe that solutions emerge from your judicious study of discernible reality.’ … ‘That’s not the way the world really works anymore,’ he continued. ‘We’re an empire now, and when we act, we create our own reality. And while you’re studying that reality… we’ll act again, creating other new realities, which you can study too, and that’s how things will sort out. We’re history’s actors… and you, all of you, will be left to just study what we do.’

They did, of course, create their own reality — the hideous Iraq war and all that followed from it including, now, the crazed and spreading “discernible reality” of ISIS. Rove’s madness is a chilling description of the anti-intellectual roots of U.S. policy-making, which continues under Obama.

While Canada is hardly an empire, Stephen Harper clearly sees himself and his government as junior partners — indeed in terms of rhetoric Canada often goes beyond the U.S., rattling sabres it doesn’t have. Rove was referring to his own community as “faith-based.” Stephen Harper could be a charter member.

But the problem with faith is that it leads you down a single road without the possibility of reassessment — it provides a false certainty in a world where there is none. The consequence with respect to the Russia-Ukraine conflict is obvious — and was revealed in a British House of Lords investigation.

The report accused both the U.K. and the EU of a “catastrophic misreading of the mood in the Kremlin in the run-up to the crisis in Ukraine” which led to them “sleepwalking” into the crisis.

How could they have misread Putin so badly? How was it possible that senior politicians could have been unaware of the centuries-long relationship between Russia and Ukraine? Of the EU and U.S. promise in the 1990s that they would not expand NATO eastward? Of the fact Russia, too, has “national interests”? Faith in their own vision and disdain for their own advisors seems to have something to do with it. According to the BBC’s report on the Lords’ study:

It blamed Foreign Office cuts, which it said led to fewer Russian experts working there, and less emphasis on analysis. A similar decline in EU foreign ministries had left them ill equipped to formulate an ‘authoritative response’ to the crisis. The result was a failure to appreciate the depth of Russian hostility when the EU opened talks aimed at establishing an ‘association agreement’ with Ukraine in 2013.

British Prime Minister Cameron immediately rejected the conclusion of the report and doubled down on his crusader policy: “What we need to do now is deliver the strongest possible message to Putin and to Russia that what has happened is unacceptable.”

The crusader rhetoric doesn’t come just from the fevered minds of Harper, Cameron and Obama — the media and the punditry are mostly hands on deck, too.  Even the normally rational, establishment magazine, Foreign Affairs (the publication of the Council on Foreign Relations — the unofficial custodian of U.S. foreign policy) has abandoned its role as rational foreign policy guidebook, according to economist Paul Craig Roberts, former treasury secretary under Ronald Reagan. In an article entitled “Washington Has Resurrected the Threat of Nuclear War”, Roberts is almost apoplectic in reviewing a Foreign Affairs article by a rabid Ukrainian nationalist who suggested Putin was about be brought down by internal revolt or, if not, then by an alliance of “North Caucasus, Chechnya, Ingushetia, Dagestan, and the Crimean Tatars.”

Canadian rhetoric is scarcely any more rational or in any way reflective of Canada’s national interests. It is all bellicose stupidity disguised as concern for democracy and sovereignty. And it’s mostly talk. Ukraine will need tens of billions in economic aid every year for a decade just to survive but the West has no intention of providing such largesse. We constantly encourage Ukrainian nationalism, mislead the Ukrainian people as to what we are willing to contribute and promote the false notion that Putin can be easily intimidated.

Talk of providing advanced weapons to the Ukrainian military is frighteningly irresponsible but the war-talk continues. We might expect that Canada would listen to others closer to the scene — like Germany’s Angela Merkel who is clearly alarmed at her English-speaking NATO partner’s recklessness. She stated on Feb. 7: “I cannot imagine any situation in which improved equipment for the Ukrainian army leads to [Russian President Vladimir] Putin being so impressed that he believes he will lose militarily.”

Harper and his senior partners seem to project the consequences of their pronouncements no more than a few hours into the future. They seem barely cognizant that there will be consequences to their actions and rhetoric. If the West and the corrupt and inept Ukrainian government (watch the parliamentary fist fight here) ever did end up in a war with Russia it would be over in two weeks. Then what would Harper, Obama and Cameron do? Will NATO invade to free the Ukraine and confront nuclear-armed Russia? Do our “leaders” have any long-term policy at all? Do they think it’s all just a game?

We rarely hear from military intelligence on these matters because by its nature only the government has access to it. But it would be fascinating to know what they think of this endless provocation of Russia. We now have, thanks to David Pugliese of the Ottawa Citizen, a window onto how the military felt about another reckless Canadian enterprise — the overthrow of Libya’s Moammar Gadhafi… According to Pugliese, just days before Canadian planes began bombing, the military warned the government: “There is the increasing possibility that the situation in Libya will transform into a long-term tribal/civil war. This is particularly probable if opposition forces received military assistance from foreign militaries.” They further warned that removing Gadhafi (a staunch ally in the fight against Al Qaeda) would “play into the hands of” Islamic militants.

The warnings were ignored. Then foreign affairs minister John Baird demonstrated the Harper government’s contempt for professional analysis and advice in his prediction of the future, declaring: “The one thing we can say categorically is that they couldn’t be any worse than Col. Gadhafi.” If by “worse” we mean a failed state, dozens of heavily armed militias fighting for control and ISIS now planning to use Libya as a launch pad for attacks on Europe then I guess Mr. Baird was wrong.

We are left to speculate what warnings the Canadian military are giving the Harperium regarding sophisticated weapons for the Ukrainian government.

You know things are really dangerous when one of America’s pre-eminent warmongers is worried about U.S. policy. Henry Kissinger recently wrote in The Huffington Post, “Far too often the Ukrainian issue is posed as a showdown: whether Ukraine joins the East or the West. But if Ukraine is to survive and thrive, it must not be either side’s outpost against the other — it should function as a bridge between them.”

Hubris and a contempt for analysis and history played out quickly in Libya. There is still a chance that the world can step back from the brink in Europe. If it doesn’t we will know who to blame.