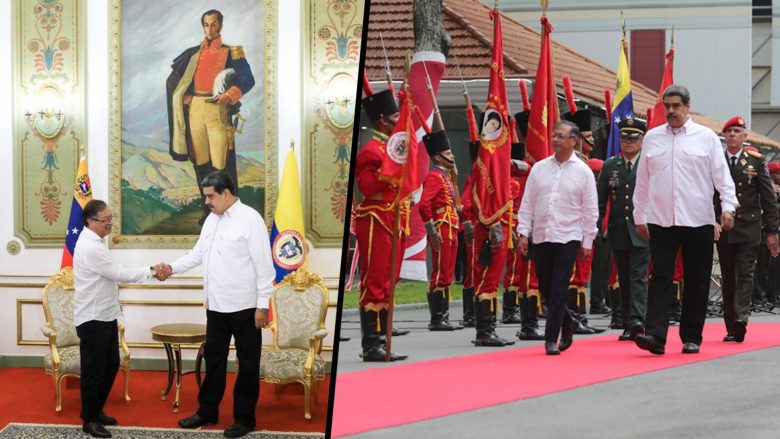 Colombia’s first-ever left-wing leader Gustavo Petro took a historic trip to Venezuela, pledging regional unity following the anti-imperialist model of Simón Bolívar. Meeting with President Nicolás Maduro, Petro said it is “suicidal” to divide the countries, “because we are the same people,” in “historically one single Bolivarian nation, reunited.”
_______________________

Colombia’s first ever left-wing President Gustavo Petro made history on November 1 by visiting his neighbor Venezuela, officially normalizing relations after years of hostility.

After a meeting with Venezuelan President Nicolás Maduro, the two leaders signed a joint declaration pledging to unify the countries and integrate Latin America, following the anti-imperialist model of Simón Bolívar.

Petro said it is “suicidal” to divide the countries, “because we are the same people,” in “historically one single Bolivarian nation, reunited.”

The presidents symbolically posed for photos in front of large portraits of Bolívar, the revolutionary general who led a successful armed uprising against Spanish colonialism and established many of the modern states of South America.

Colombia’s previous administration had formally cut off diplomatic relations with Venezuela in 2019, when the United States initiated a coup attempt against the nation’s democratically elected leftist Chavista government.

The right-wing government in Bogotá at the time became Washington’s most important ally in its often violent attempts to overthrow President Maduro.

Petro is the first Colombian leader to travel to Caracas since 2011, when Hugo Chávez was Venezuela’s elected president. And in that year more than a decade ago, Colombia’s President Juan Manuel Santos did not visit specifically to meet with Chávez, but rather to attend the international summit of the Community of Latin American and Caribbean States (CELAC).

Petro’s office said one of the main goals of the meeting was to “kickstart the economy of the region and socialize its agenda in the favor of the interests of the Latin American bloc and the protection of the Amazon.”

Venezuela called the historic visit the beginning of a “new era of cooperation.” Maduro declared, “We keep taking good steps toward integration!”

The two countries signed a joint declaration pledging to advance “toward the union and peace of our countries, as our Liberators did in the same patriotic emancipatory achievement.”

Maduro and Petro wrote that they were “inspired by the historical legacy of union and the spirit of fraternity that we inherited from the Father Liberator Simón Bolívar and the brotherhood of our peoples, which now are geographically and politically two sovereign republics, but historically one single Bolivarian nation, reunited.”

The agreement emphasized the importance of economic relations between the neighboring countries.

The document called for cooperation in trade, transport, and agricultural production. It also proposed coordination of mining and exploration efforts.

Venezuela and Colombia share a massive, 2341-kilometer border. Colombia closed this crossing in 2015. It was temporarily unblocked in 2016, but later shut again, until Petro’s government agreed to re-open it this September 26.

The new joint declaration prioritized security cooperation on the border, in order to “fight against organized crime.”

Petro said, “We are here to start over on a path, which is difficult, but we must go down it. That path begins with rebuilding the border. The border is in the hands of mafias.”

Petro called for Venezuela to be re-integrated into regional institutions.

The Colombian leader also pressured Maduro to hold a dialogue process with the opposition.

Petro said it would be “suicidal” to divide the countries: “It is not natural. In more human terms, it is anti-historical that Colombia and Venezuela be separated, because we are the same people.”

In press statements on the historic meeting, Caracas criticized the “interventionist conduct” of the previous right-wing Colombian administrations and their “attack against the Venezuelan government.”

In 2019, the Donald Trump recognized Juan Guaidó, a little-known opposition figure, as supposed “interim president” of Venezuela, despite the fact that he had never participated in a presidential election.

Duque’s government immediately joined in backing Guaidó and sponsoring his gang of coup-plotters, many of whom were physically based in Colombia.

The Trump administration sponsored a series of training camps in northern Colombia, where right-wing extremists prepared cross-border attacks and made plans to try to violently overthrow President Maduro.

Trump’s Defense Secretary Mark Esper revealed in a memoir he published after leaving office that senior US officials had often discussed launching military strikes on Venezuela.

After Trump met with Guaidó in the Oval Office in February 2020, Esper, Guaidó, and other coup-plotters talked about the training of far-right militants in Colombia and plans to invade Venezuela.

In May 2020, these terrorists launched a failed invasion of Venezuela, known as Operation Gideon. Top coup-plotters involved in the operation said they had the support of the CIA and Colombian intelligence services.

After Trump met with Guaidó in the Oval Office, Esper and coup-plotters discussed plans to train terrorists in Colombia to invade Venezuelahttps://t.co/QBMYtJitX3

Petro immediately pushed to normalize relations with Venezuela. On June 22, Colombia’s then president-elect called Maduro to inform him that he prioritized restoring diplomatic and commercial ties as soon as possible.

In September, Venezuela also agreed to help mediate peace talks between armed socialist militia the ELN and the Colombian government. The parties signed an agreement formally initiating the diplomatic process in Caracas in October.

Venezuela had previously played a similar role in co-sponsoring successful peace talks between the Colombian government and another armed socialist militia, the FARC.

The historic meeting of Maduro and Petro and their pledge to pursue regional unity is reminiscent of the political integration of Egypt and Syria in 1958, under the revolutionary left-wing nationalist President Gamal Abdel Nasser. 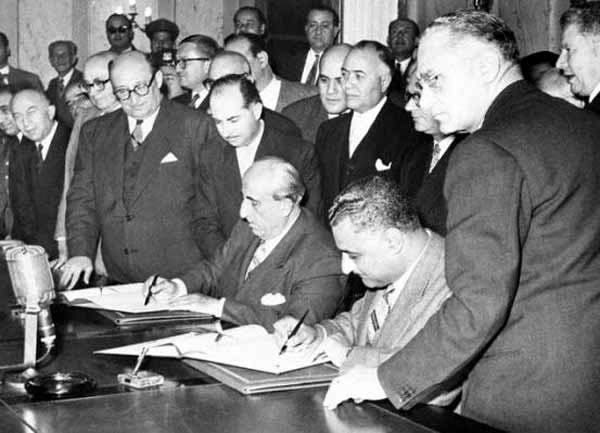 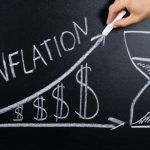 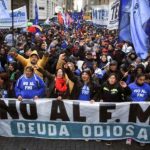