Climate change and nuclear threats feed off each other and should be treated in unison, an influential U.S. think-tank says.

LONDON –  Climate change and nuclear threats are closely linked and must be tackled together, U.S. experts say. The warning comes from a working group chaired by the Center for Climate and Security (CCS), a non-partisan policy institute of security and military experts (many of them high-ranking former members of the armed forces), in a report which offers a  framework for understanding and addressing the distinct problems together. 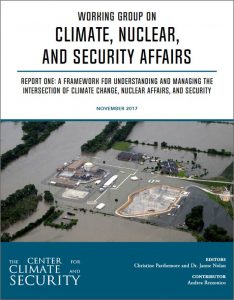 58-page report by The Center for Climate and Security, Nov 2017

The report is published as this year’s UN climate summit draws to a close in Bonn in the aftermath of President Trump’s tour of Asia, during which nuclear weapons issues featured prominently.

Simultaneous effects of climate change, tough social or economic pressures, and security challenges could increase the risk of conflict among nuclear weapon-possessing states, even if that conflict stems from miscalculation or misperception.

India and Pakistan are major concerns. They are grappling with water stress, deadly natural disasters, terrorism, and numerous other pressures. At the same time, the types of nuclear weapons they are developing and policies on command of those weapons are raising tensions between them.

This is especially dangerous in times like these when some countries are more actively flaunting their nuclear threats toward one another. North Korea has been the most active in that regard.[1]

The authors say countries such as Nigeria, Jordan, Egypt and Saudi Arabia are dealing simultaneously with a range of interdependent internal pressures – including climatic, economic, security, and environmental demands – as they pursue nuclear energy.

Bangladesh is coping with sea-level rise and changing Himalayan glacial patterns and with terrorism and overpopulation. The report says these stresses could affect the security and safety of the nuclear reactors being built in the country with Russian help.

Concerns about nuclear security and proliferation could help countries to rely instead on fossil fuels and maintain their high dependence on them, “making dangerous, business-as-usual climate change scenarios more likely”. And it says people forced into migration by climate change or other factors can affect security and nuclear stability.

The report says it is important to develop technologies to help countries which seek to introduce nuclear energy, including the safest reactor designs, modern security and monitoring systems and strong climate modelling abilities.

It says this is especially critical in the potential crisis regions where combining security, climate, and nuclear risks must be addressed urgently: South Asia, the Middle East, the South China Sea and Central and North Africa.

The report also says there is mounting evidence that various security challenges, climatic trends and nuclear issues are combining in new and potentially high-risk ways. Mapping and addressing this complexity is critical for protecting U.S. security interests not only in these crisis regions, but across the Indo-Asia-Pacific and Europe as well.

It urges the U.S. to develop realistic planning, better communication about nuclear and climate risks, and education for policymakers about practical ways they can protect America’s capacities for coping with these challenges.

The report suggests that U.S. leaders should encourage more robust engagement between public and policymakers on risks like nuclear conflict and climate change, and should convey risks in ways that people can relate to, for example emphasising ways to reduce threats to vulnerable infrastructure.

Note by New Cold War.org:
[1] There is no mention by the cited report author of past U.S. nuclear weapons installation on the Korean peninsula, U.S. threats to resume the stationing of nuclear weapons there, and Donald Trump’s threat delivered in September 2017 (before the UN General Assembly, no less!) to “totally destroy” North Korea! What about the U.S. resumption of a nuclear arms race? And on and on. The 58-page report of The Center for cClimate and Security is titled, ‘A Framework for Understanding and Managing the Intersection of Climate Change, Nuclear Affairs, and Security’. The words ‘Donald Trump’ do not appear in the report. The one-sided blindness of a commendable effort to draw attention to the dangers of nuclear war and global warming is unfortunate.

Press release published on the website of Center for Climate and Security, Nov 15, 2017

Washington, DC, November 15, 2017 — In its initial report released today, the Working Group on Climate, Nuclear, and Security Affairs, chaired by the Center for Climate and Security, has articulated a first-of-its kind framework for understanding and addressing the complex connections between climate change, security, and nuclear issues. The report arrives as the 23rd Conference of the Parties concludes its meeting in Bonn, Germany to plan implementation of the Paris Climate Change Agreement, and in the aftermath of President Trump’s tour of Asia, during which nuclear weapons issues featured prominently.

Countries such as Nigeria, Jordan, Bangladesh, Egypt, and Saudi Arabia are dealing with numerous internal climatic, economic, security, demographic, and environmental pressures as they pursue nuclear energy. The Working Group noted the importance of these countries considering how these issues might influence one another—and raised concerns that Russia may be a dominant nuclear supplier to such countries.

Without question, the global security environment is complex, evolving and sometimes rapidly changing. The report finds that the effects of climate change are complicating that landscape, and intersecting with nuclear trends, including new countries seeking nuclear energy, some traditional nuclear energy-producing countries pivoting to other power sources, new pressures on the nonproliferation regime, and many specific nuclear risks persisting or increasing.

“Even more important,” said Dr. Janne Nolan, the Working Group’s Co-chair, Chair of the Nuclear Security Working Group, and Center for Climate and Security Advisory Board Member, “these dynamics are connected. Climate, security, and nuclear trends influence one another, and risk combining in unprecedented and catastrophic ways. This is why understanding systemic risks and remedies and their interconnections is so critical, and the heart of the Working Group’s first report.” For example, some experts are concerned that combining tensions over water, territory, and other issues may increase nuclear detonation risks in regions like South Asia.

The framework presented in the report can serve as a guide for how smart planning, preparations, and policies can help the United States and others navigate this combination of stresses and create a more resilient, stable world. Bolstering international mechanisms (e.g., supporting the IAEA and the Paris agreement), addressing underlying drivers of insecurity and instability, and accounting for social and political movements will be required to help mitigate the types of concerns raised in this report. Smartly developing and applying key technologies will likewise help in countries like those named above, including the safest reactor designs for countries that adopt nuclear energy, modern security and monitoring systems, and strong climate modeling capabilities. This is especially critical in the potential crisis regions where combining security, climate, and nuclear risks must be addressed with urgency: South Asia, the Middle East, the South China Sea, and Central and North Africa.

“We don’t know with full certainty the world’s climatic trajectory or nuclear energy future, nor can we fully decide these global trends. We must map the risks and opportunities involved with all potential outcomes and find ways to promote U.S. security interests in all scenarios,” said Christine Parthemore, the Working Group’s co-chair and Director of the Climate-Nuclear-Security Program at the Center for Climate and Security. “The stakes are high on navigating these interacting challenges with smart policies and programs.”

The Working Group on Climate, Nuclear, and Security Affairs was launched in 2016 by the Center for Climate and Security. This groundbreaking effort stems from the mounting evidence that various security challenges, climatic trends, and nuclear issues are combining in new and potentially high-risk ways. Mapping and addressing this complexity is critical for protecting U.S. security interests in places such as Jordan, Turkey, Saudi Arabia, and across the Indo-Asia-Pacific and Europe—and in international fora.

In today’s report, the Working Group recommends beginning with a few broad but clear steps to begin advancing U.S. interests regarding intertwining climate, nuclear, and security affairs. These include developing realistic planning scenarios, improving communication regarding existential nuclear and climate risks, and educating policy makers about the practical ways they can protect America’s capacities for navigating these challenges. For example, the report suggests that U.S. governmental and non-governmental leaders: 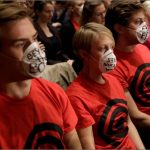 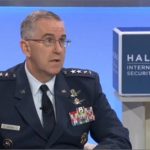