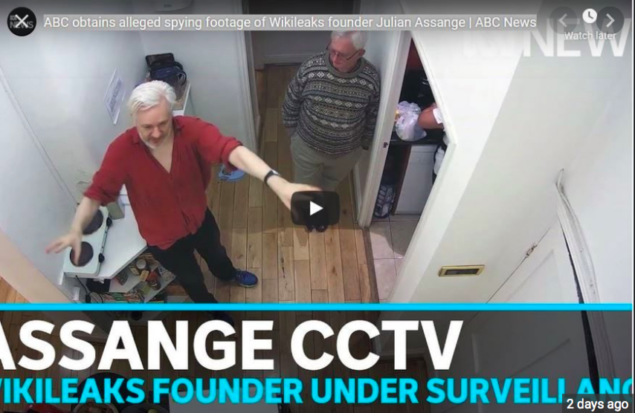 As the ABC news item below shows, Julian Assange’s privileged conversations with his lawyers on his legal defence were being spied on, by the government which is now seeking to extradite him. In any jurisdiction in the civilised world, that should be enough immediately to bring proceedings to a halt.

Here is an image of Julian and I talking in the Ecuadorean Embassy, part of the spycam footage that was commissioned by the CIA from Spanish security firm Global. Julian and I were discussing a number of overseas missions to liaise with foreign governments, which I was carrying out on his behalf.

(Incidentally can anybody explain why the precise image you see there is an image which does not appear at any stage when you run the video? I am not even hinting at anything suspicious, just technically interested).

Having been on the inside and knowing their capabilities, I have always assumed that the security services know everything I say and do, so I cannot claim this comes as a great shock or that my behaviour would have been much altered had I known. The shadowing on those overseas trips was unsubtle in any case, more of a warning off than attempt at covert surveillance. As anyone who has read my books will realise, I have always rather enjoyed the more shadowy elements, with me since my former profession. During a visit to Washington in September 2016 which has become somewhat infamous, for fun I entered an establishment of low repute and spent an afternoon giving out free flash drives with my tips to various young ladies and barmen, just to give the FBI lots of particularly wild geese to chase. I have wondered occasionally whether subsequent embarrassment is connected to Robert Mueller’s lack of desire to accept my evidence. (If you have no idea what I am talking about do not worry, you haven’t missed much and just skip this para).

While I am gently rambling away, I might add that it was most amusing to be portrayed as a housebound obsessive blogger by MSM journalists attacking me on Twitter over my Salmond coverage: that is attacked by MSM journalists who have never done anything in their life except copy and paste the odd establishment press release and pick up fat pay cheques from their billionaire owners.

There is however a point to this post. As the ABC news item above shows, Julian’s privileged conversations with his lawyers on his legal defence were being spied on, by the government which is now seeking to extradite him. In any jurisdiction in the civilised world, that should be enough immediately to bring proceedings to a halt. The first witnesses to be called when the hearing resumes are the witnesses who will attest to this. The defence have requested an adjournment of the case beyond May 18, because at present they have no access to their client due to Covid 19 lockdown in the jail, and because it is not at all clear witnesses will be able to travel from abroad by 18 May. Judge Vanessa Baraitser has refused to reschedule.

It is also worth asking why has nothing like that ABC coverage been seen on the BBC or Sky, where this case is actually being heard and Julian is a prisoner?

With grateful thanks to those who donated or subscribed to make this reporting possible. 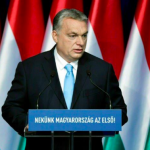 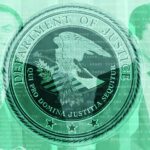 How the United States killed Brazil’s democracy. Again.Brazil, Death of democracy, Latin America and the Caribbean