The left-wing U.S. academic Noam Chomsky has hit back at Recep Tayyip Erdoğan after the Turkish president accused him of ignorance and sympathising with terrorists. 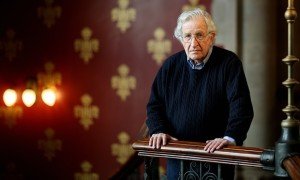 Hours after Tuesday’s bomb attack on a tourist area of Istanbul, Erdoğan delivered a sneering criticism of Chomsky and “so-called intellectuals” who had signed a letter calling on Turkey to end the “deliberate massacre” of Kurdish people in the south east of the country, He invited Chomsky to visit the area in a defiant televised speech to a conference of Turkish ambassadors in Ankara.

Chomsky has now rejected the invitation. In an email to the Guardian he said: “If I decide to go to Turkey, it will not be on his invitation, but, as frequently before, at the invitation of the many courageous dissidents, including Kurds who have been under severe attack for many years.” Chomsky also claimed Erdoğan was operating double standards on terrorism.

In the open letter to Erdoğan released last month, Chomsky and hundreds of others accused him of waging war against his own people. It said: “We demand the state to abandon its deliberate massacre and deportation of Kurdish and other peoples in the region. We also demand the state to lift the curfew, punish those who are responsible for human rights violations, and compensate those citizens who have experienced material and psychological damage. For this purpose we demand that independent national and international observers to be given access to the region and that they be allowed to monitor and report on the incidents.”

“We, as academics and researchers working on and/or in Turkey, declare that we will not be a party to this massacre by remaining silent and demand an immediate end to the violence perpetrated by the state.”

In his speech, Erdoğan said: “Let our ambassador from the United States invite Chomsky, who has made statements about Turkey’s operations against the terrorist organisation. Let’s host him in the region.”

Referring to operations of the Kurdish separatists in the PKK, Erdoğan added: “We are ready to tell them what is happening in the south-east. They should see with their eyes whether the problem is a violation by the state or the hijacking of our citizens’ rights and freedoms by the terrorist organisation.”

He went on to accuse Chomsky and the other signatories of displaying the “mentality of colonialism,” saying: “You so-called intellectuals are not enlightened persons, you are in the dark. You are nothing like intellectuals.”

A live translation by al-Jazeera quoted Erdoğan saying: “I have a message for those academics. Just putting your signature on a dry piece of paper means nothing. Come to Turkey.

“Chomsky can see what is taking place in Turkey with his own eyes, not through the eyes of a fifth column. Let those academics come to Turkey – I’m certain we will be able to show them the true picture.”

In his email to the Guardian, Chomsky accused Erdoğan of hypocrisy. He said: “Turkey blamed Isis [for the attack on Istanbul], which Erdoğan has been aiding in many ways, while also supporting the al-Nusra Front, which is hardly different. He then launched a tirade against those who condemn his crimes against Kurds – who happen to be the main ground force opposing Isis in both Syria and Iraq. Is there any need for further comment?”