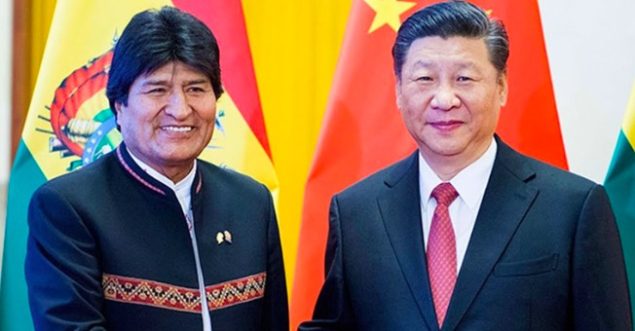 US imperialism’s determination to dominate the entire globe is plunging humanity into a dangerous new cold war. The US ruling class is absolutely desperate to stop the rise of China and is increasing its aggression on many fronts to achieve this goal – from economic warfare to militarily encircling China. Should the US succeed in its cold war, the consequences would be truly devastating not just for the Chinese people but for all of humanity.

US imperialism’s determination to dominate the entire globe is plunging humanity into a dangerous new cold war. The US ruling class is absolutely desperate to stop the rise of China and is increasing its aggression on many fronts to achieve this goal – from economic warfare to militarily encircling China. Should the US succeed in its cold war, the consequences would be truly devastating not just for the Chinese people but for all of humanity.

The US has a long record of intervention in Latin America to ruthlessly promote its own interests – from sponsoring military coups, backing dictatorships and subverting democratic process, to launching economic warfare with the goal of impoverishing entire societies in order to pave the way for regime change. The US regards Latin America as its “backyard” and continues to violently oppose all movements on the continent that are struggling for independence, sovereignty and national development.

China is offering Latin America a different model of international relations, based on respecting other countries’ right to determine their own affairs and “win-win” cooperation. Whereas US foreign policy is for all of humanity to subordinate itself to the interests of the US ruling class, China’s foreign policy doctrine is to build a “shared future for humankind” based on cooperation and multilateralism.

This vast difference between the US and China’s foreign policy doctrines towards Latin America was graphically explained by Bolivian journalist Ollie Vargas in his outstanding speech to the International Peace Forum hosted by the No Cold War international campaign on 26 September 2020, which is shared below.

In the words of Vargas:

For the left to be neutral in the face of the US’s cold war against China, to present the US and China as twin evils and therefore adopt the slogan of “neither Washington nor Beijing” is completely absurd and bares no relation to the reality. It is the US, not China, which represents a threat to all humanity.

This is an issue that affects all of humanity. It affects countries such as Bolivia, such as Venezuela, such as Cuba.

Bolivia is the latest country to have suffered US intervention, to have left the path of sovereignty and national development and adopt the US model of free market destruction and colonial dependency. What has happened in Bolivia is what the US wants to impose in China, in Cuba and in those countries that have successfully resisted US imperialism for so many years.

What has happened in Bolivia? We’ve seen the indigenous majority, the working-class majority of the country now excluded from power where once they were able to participate in the political governance of the country. They are now excluded, now discriminated against on the basis of race, of culture.

In the economy, the effects have been even more disastrous. After just a few months of neoliberal reforms: paralyzing state-led development projects started under Evo Morales; privatising the state industries that were nationalised by Evo Morales; and destroying the levels of public and social spending that were possible thanks to the socialist development that Bolivia had enjoyed in the past 14 years. All of that has been destroyed. Unemployment has now tripled, poverty has risen to the levels it was 15 or 20 years ago when Bolivia was the poorest country in the region.

Bolivia has gone back to the path of dependency, of assuming its role in a global division of labour in which the country exports raw materials with no means to alleviate the poverty that the country suffers.

What’s happened in China now? China has refused to accept that position and has taken the path of national development through using the state as the motor through which it builds the country’s productive forces and through that lift people out of indignity, out of poverty, give people the tools with which to live a human life with internet, with electricity, with running water, with homes that don’t collapse whenever there is rain. And that’s the path that countries such as Bolivia were also taking for 14 years – beginning to develop and which has since been destroyed.

The China model is an inspiration for countries around the world. It’s important to remember that China is not a country that seeks to impose its model around the world; it doesn’t seek to invade countries, promote coups, to install puppets around the world. Here in Latin America China has extremely close relations with both Venezuela and Columbia – two countries with completely different, divergent official ideologies. But China still has commercial ties in both countries. China had commercial ties with Argentina’s right wing, neo-liberal government of Mauricio Macri and next door here in Bolivia with the government of Evo Morales. China doesn’t seek to impose their way of life, their culture, their economic model on those it interacts with.

Although the China model isn’t something that is being exported, it’s something that we have to study because it’s the model that can bring peace around the world. If the United States engaged with the world, if it sought partners in development, if the United States sought to work with countries as equals then the world would be a far more peaceful place. If they did as China does, cooperating with countries for mutual economic benefit, for mutual economic development, then the world would know prosperity, the world would know peace.

Here in Bolivia, China was involved in a number of state development projects which brought huge benefits to Bolivia people. The internet connection with which I’m speaking to right now is thanks to Bolivia-China cooperation under the government of Evo Morales. Before Evo Morales, Bolivia had a neoliberal model which created poverty and the country had almost no connectivity. Those in rural areas and working class areas of the city didn’t have phone signals or internet connection. And what happened when Evo Morales took power? He worked with China to build a satellite, it’s called the Tupac Katari satellite, named after an Indigenous leader who fought the Spanish Empire here in Bolivia. Bolivia is a small country, it doesn’t have the expertise to launch a rocket into space, so it worked with China to launch the satellite which now provides internet and phone signal to all corners of the country, from the Amazon, through to the Andes, and here in the working class areas of the big cities.

From this example of cooperation we can learn a lot because although China brought the expertise and a lot of the investment, they didn’t seek to take ownership of the final product. That satellite belongs to Bolivia, it belongs to the Bolivian people and China entered into that project as a partner, as an equal for mutual economic benefit.

Is that the model the US adopts? It’s not. The US seeks to take ownership of the country’s natural resources, seeks to take ownership of a country’s government and that model will always lead to war because it overrules the right of self-determination of the people. So wherever the people demand to govern themselves, demand national independence and sovereignty, they always run up against the model that seeks to crush them.

I think we have a lot to learn from the way that China interacts with the world on peaceful terms, seeking equal partners, seeking cooperation rather than domination, rather than dependency. 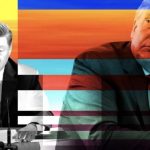 The left must oppose the US cold war on China and not sit on the fenceFiona Edwards, No to the New Cold War 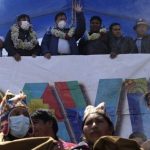 Media coverage of Bolivia’s elections: Who got it right, who didn’tBolivia, Media bias