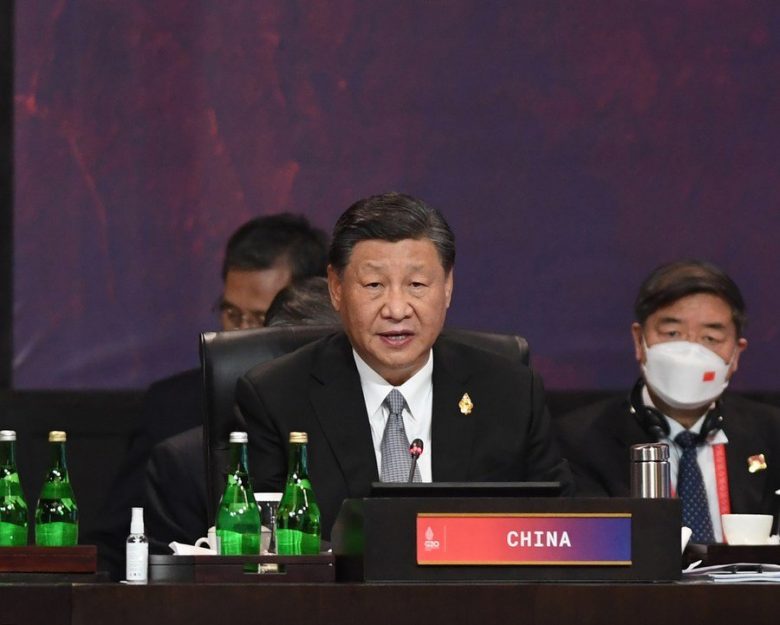 *The world has been bewildered by mixed and acute challenges, including an increasing risk of a deep recession, a wider gap between the rich and the poor, worsening food and security crises, as well as growing attempts to form bloc politics and stoke confrontation.

*During the G20 Bali summit, Xi elaborated on China’s visions on and solutions to addressing pressing global challenges, calling on all G20 members to take the responsibility inherent in being major international and regional players, and to lead by example in promoting development of all nations, improving the well-being of the whole mankind, and advancing progress of the entire world.

*As the world is going through unprecedented difficulties unseen in many decades, concerted efforts by all countries are urgently needed. As a group consisting of developed countries and emerging economies, G20 plays a leading role in fostering a collective way forward.
________________________

BALI, Indonesia, Nov. 17 (Xinhua) — Chinese President Xi Jinping arrived on Thursday in the Thai capital of Bangkok after attending the 17th Group of 20 (G20) Summit and meeting a number of world leaders on this Indonesian resort island.

From building consensus and strengthening solidarity, to promoting win-win cooperation, Xi has, in his four-day stay in Indonesia, offered his insight into how countries around the world can work together to address the most pressing challenges of the time and turn the world into a safer and better place. He has also elaborated on a list of concrete Chinese proposals on how to address those challenges and reaffirmed China’s commitment to working with other countries for a brighter future.

Experts and observers say Xi’s remarks on those multilateral and bilateral occasions are of paramount importance because they will help build up stronger global consensus, advance international cooperation, bolster global economic growth and achieve common prosperity as the world has once again stood at a crossroads, with its future course dependent on the choices of people of all countries.

The world has been bewildered by mixed and acute challenges, including an increasing risk of a deep recession, a wider gap between the rich and the poor, worsening food and security crises, as well as growing attempts to form bloc politics and stoke confrontation.

Adding to these challenges is an ever-changing global geopolitical landscape featuring rising protectionism and isolationism, a resurgence of the outdated Cold War mentality as well as arbitrary sanctions that have seriously disrupted international cooperation to shore up recovery.

At this critical moment, leaders of G20 members, which collectively represent around 65 percent of the world’s population, 79 percent of global trade and at least 85 percent of the world economy, have managed to gather in Bali and sit down together to discuss what is wrong with this world and what people should do about it.

During his stay in Indonesia, as the head of state of the world’s second-largest economy and a responsible major country, Xi expounded on his thoughts about the current challenges facing mankind and put forward his proposals on how to act in response both in his speeches at the G20 Bali summit and in bilateral talks with world leaders. And he repeatedly appealed for “the spirit of solidarity.”

“I always believe that the G20 should stay committed to its founding purpose of unity and cooperation, carry forward the spirit of solidarity, and uphold the principle of consensus,” Xi said in his speech at the first session of the G20 Bali summit. “Solidarity is strength, but division leads nowhere.”

“All countries should join hands together to answer the question of our times,” he said, adding that “countries should respect each other, seek common ground while reserving differences, live together in peace, and promote an open world economy.”

When meeting with UN Secretary-General Antonio Guterres on the sidelines of the summit, Xi pointed out that as the world is undergoing momentous changes, it is imperative to put the future of humanity front and center and work in solidarity to tide over the difficulties.

He called on major countries to set a good example and play a leading role, so as to bring more confidence and strength to the world.

China advocates resolving disputes peacefully through dialogue and consultation, said the Chinese president when meeting his U.S. counterpart Joe Biden ahead of the summit.

Expressing full endorsement of Xi’s proposal at the G20 summit for tackling global challenges with solidarity and cooperation and promoting more inclusive global development, Spanish Prime Minister Pedro Sanchez said China has all along been a force for stability of the international order.

“The G20 has become a platform for dialogue between developing and developed countries,” said Evandro Menezes de Carvalho from the Brazil-China Studies Center of the Getulio Vargas Foundation, adding that China has won global trust as it values globalization and inclusiveness, advocates win-win cooperation, and actively participates in the G20 and other cooperation mechanisms. 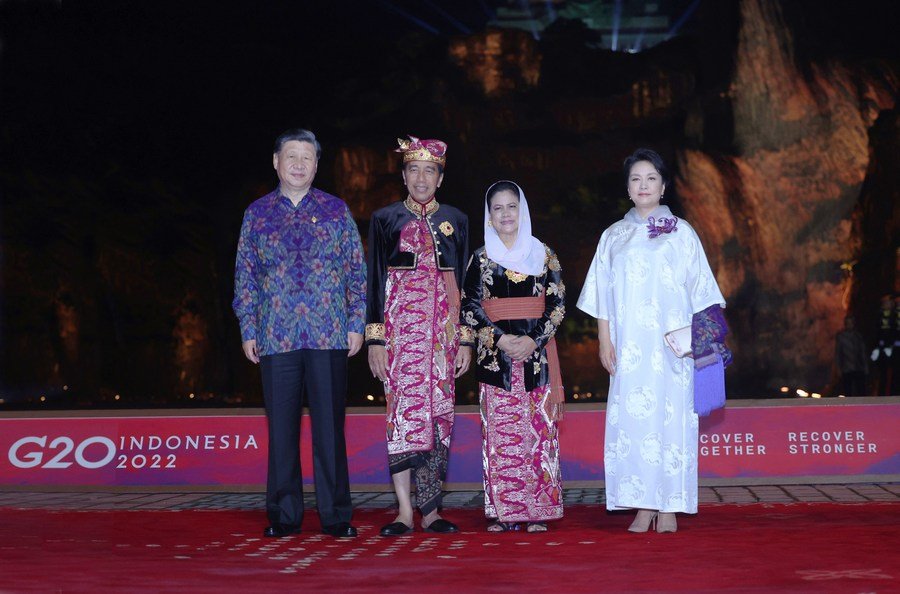 Chinese President Xi Jinping and his wife Peng Liyuan pose for a group photo with Indonesian President Joko Widodo and his wife Iriana Joko Widodo before the welcoming dinner during the Group of 20 (G20) Bali summit in Bali, Indonesia, Nov. 15, 2022. (Xinhua/Ju Peng)

During the G20 Bali summit, Xi elaborated on China’s visions on and solutions to addressing pressing global challenges, calling on all G20 members to take the responsibility inherent in being major international and regional players, and to lead by example in promoting development of all nations, improving the well-being of the whole mankind, and advancing progress of the entire world.

Addressing the first session of the summit, Xi put forward a three-point proposal, underscoring the need to make global development more inclusive, beneficial to all and more resilient.

“No one should engage in beggar-thy-neighbor practices, building ‘a small yard with high fences,’ or creating closed and exclusive clubs,” Xi said.

Meanwhile, Xi pointed out that development is real only when all countries develop together, and that prosperity and stability cannot be possible in a world where the rich become richer while the poor are made poorer.

He urged frontrunners in development to sincerely help others develop, and provide more global public goods. “All major countries should perform their due responsibilities, and do their best for the cause of global development.”

“Xi’s ideas of putting people first, making global development fairer, more inclusive, and striving to leave no country behind are not only practical, but also a vital necessity,” said Keith Bennett, a long-term China specialist and vice chair of Britain’s 48 Group Club.

Inspired by Xi’s announcement that China supports the African Union in joining the G20, Cavince Adhere, a Kenya-based international relations scholar, said, “As the largest developing country, China has been in the forefront in championing the interests and legitimate rights of developing countries.”

On the second day of the summit, G20 members discussed digital transformation, an important factor affecting the world economic landscape. Xi said China will continue to work with G20 members to foster a balanced, coordinated and inclusive global digital economy landscape that brings benefits to all and features win-win cooperation and shared prosperity. 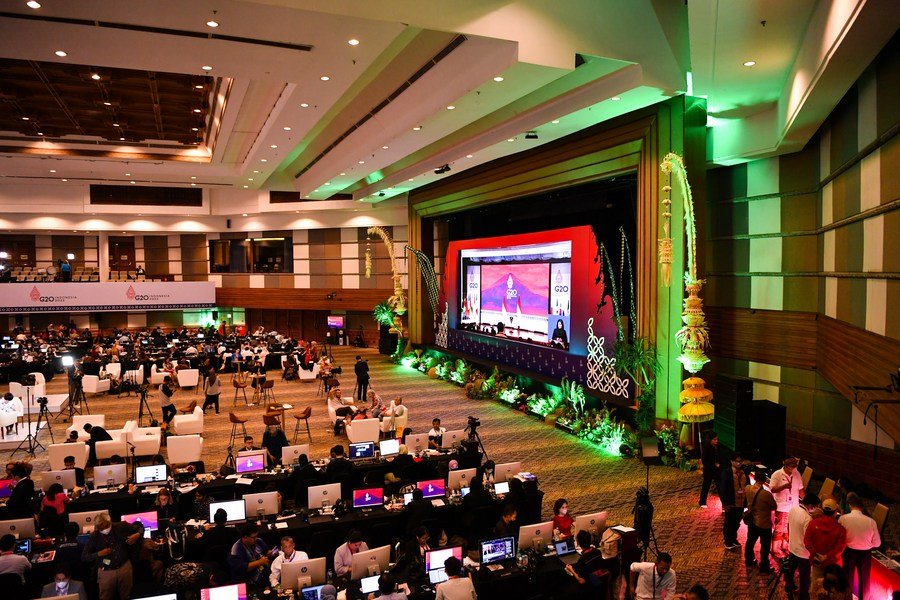 As the world is going through unprecedented difficulties unseen in many decades, concerted efforts by all countries are urgently needed. As a group consisting of developed countries and emerging economies, G20 plays a leading role in fostering a collective way forward.

During their exchange of views, Xi and Biden reached common understandings on conducting dialogue and cooperation in public health, agriculture and food security, and agreed to make good use of the China-U.S. joint working group to promote the resolution of more issues.

It is also heartening that the G20 leaders reaffirmed Wednesday their commitment to cooperation to address serious global challenges.

In a declaration adopted at the end of the summit, the G20 leaders said that collectively they carry responsibilities, and their cooperation is necessary for global economic recovery, tackling global challenges and laying the foundation for strong, sustainable, balanced, and inclusive growth.

It is essential to uphold international law and the multilateral system that safeguards peace and stability, they said, stressing that peaceful resolution of conflicts, efforts to address crises as well as diplomacy and dialogue are vital.

The leaders said they were committed to supporting developing countries, particularly the least developed and small island developing states in responding to the global challenges and achieving the Sustainable Development Goals.

The leaders promised to coordinate to achieve a robust, inclusive and resilient global recovery and sustainable development that delivers jobs and growth.

They reaffirmed their steadfast commitment to tackling climate change by strengthening full and effective implementation of the Paris Agreement and its temperature goal in ways reflecting equity and the principle of common but differentiated responsibilities and respective capabilities in light of different national circumstances.

Overseas experts say the consensus on cooperation reached at the G20 summit has greatly boosted global confidence in overcoming the current crises and striding toward a shared brighter future.

“As China rightly points out, a coordinated global approach to those problems of the world is a must,” said Selcuk Colakoglu, director of the Turkish Center of Asia Pacific Studies.

Looking into the future, Indonesian President Joko Widodo said before handing the G20 presidency to India: “Let us recover together, recover stronger.” 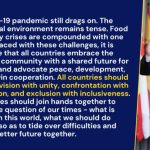 Xi Jinping: Working together to meet the challenges of our times and build a better futureChina, G20 summit, Transcript, Xi Jin Ping 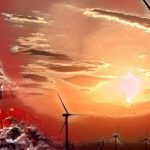