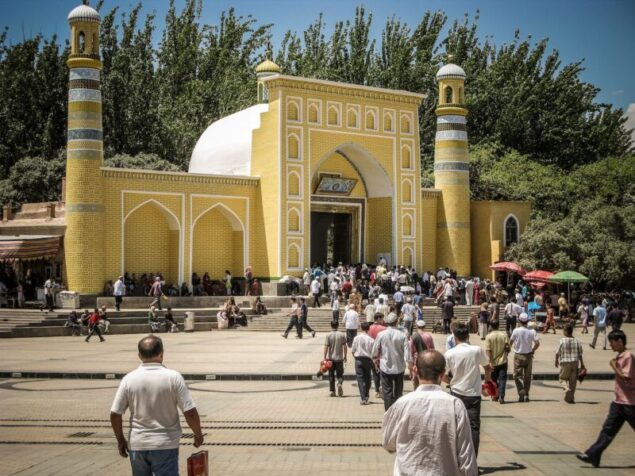 Phil Taylor interviews veteran Canadian trade unionist Omar Latif. Latif visited the Xinjiang Autonomous Region of China, and debunks the absurd propaganda that China is conducting a genocide of Uyghurs there. We also include the photos Omar Latif took while in Xinjiang and the article he wrote following his visit, and which refers to in his article.

Taylor Report · China, the West and the Uyghurs
ARTICLE 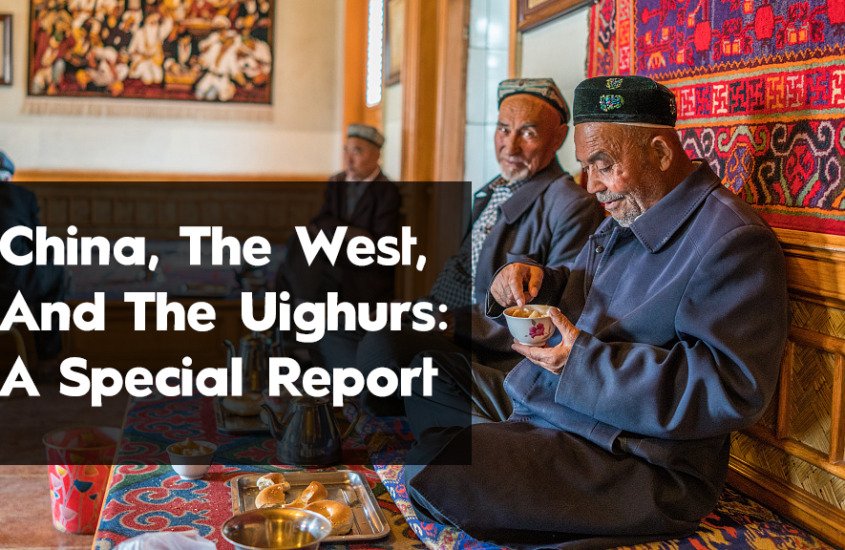 OMAR LATIF, a Canadian trade unionist and peace & solidarity activist, gives a first-hand report on what he saw, sensed and learned during his visit to Ürümqi and other parts of Xinjiang Uighur Autonomous Region in June 2019

“Few had heard of Xinjiang or the Uighurs till a few years ago. Beginning with 2018, there can’t be many who have not heard of them.

Below are some of the main accusations, originating mainly in the west, against China in relation to Uighurs and my view on them:
Gens is people or race; Cide is death or killing. Is China inflicting genocide on the Uighurs of Xinjiang – like that of Indigenous Peoples by settler-colonialists, of Jews by Nazi Germany or of 500,000 to 1 million communists – mainly of Chinese ethnicity – by right-wing generals in Indonesia in 1965?

However, the UN definition of ‘genocide’ is broader: it includes acts of great suppression against a defined group or people.

To incarcerate one million Uighurs – for belonging to a certain nationality and a certain faith – would be a great crime. ‘No, the UN did not say China has massive internment camps for Uighurs’ by Ben Norton and Ajit Singh of The Grayzonedebunks such claims. Some US officials, put the number as high as 2, even 3 million! The populations of Ottawa and Calgary are around 1 million each, of Montreal and Manhattan, 1.6 million. Imagine the number of buildings and the infrastructure required to house and service that number of prisoners! With satellite cameras able to read a vehicle license plate, one would think the US would be able to show those prisons and prisoners in great detail. What is shown are very similar pictures of a tall wall topped by barbed wire and a turret.

Uighurs (and other national minorities) were exempt from China’s ‘one-child’ policy from 1978 to 2017. Why would China forcibly try to reduce the birthrate – by forced sterilizations yet – now, especially since the 12 million Uighurs are only 0.8% of China’s population of 1.4 billion? The causes of the lowering of the population growth rate among Uighurs are the same as elsewhere; more women acquiring higher education and participating in the workforce; less necessity for parents to have more children to take care of them in old age; urbanization; lessening of patriarchal controls over women; increased freedom for women to practice birth control. 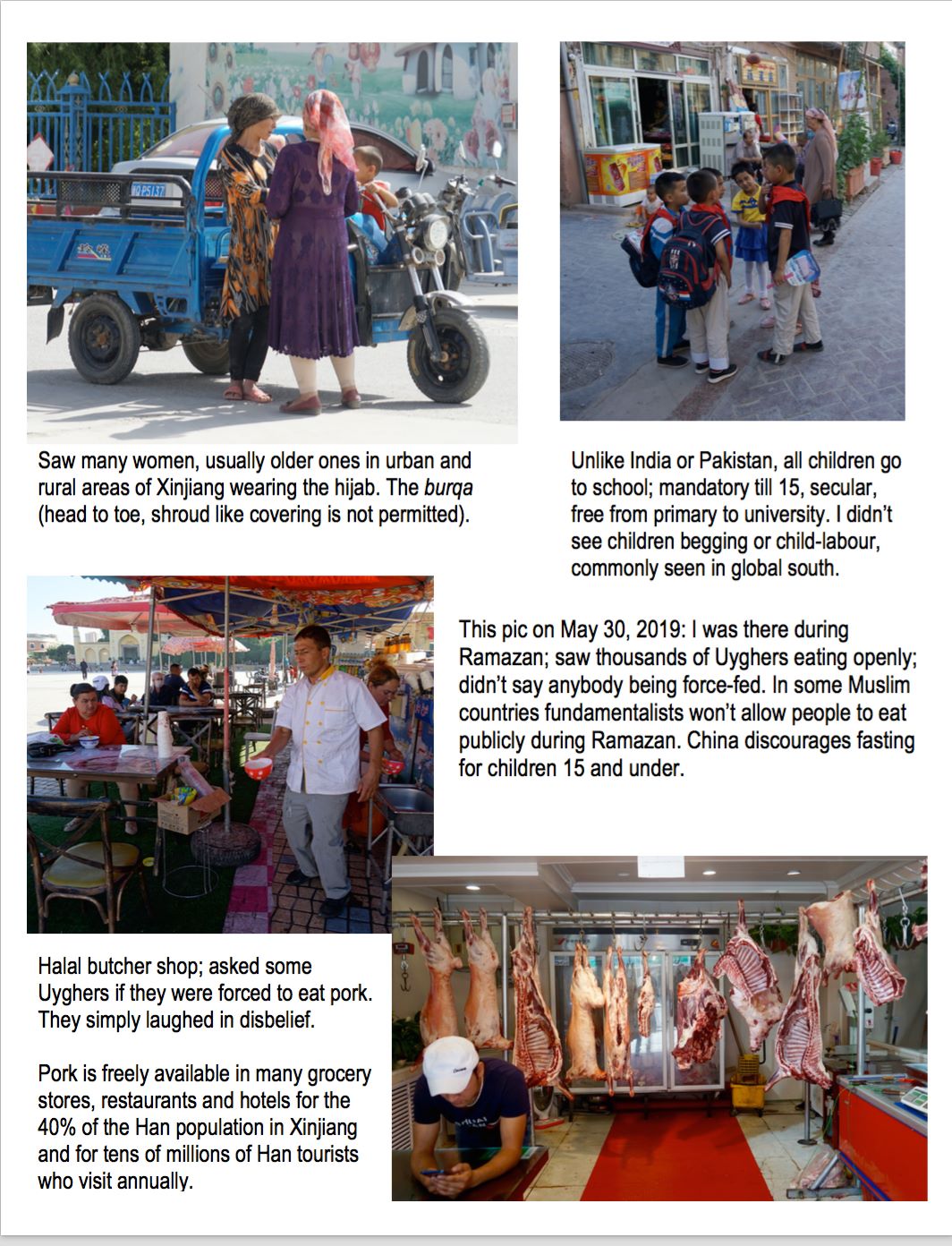 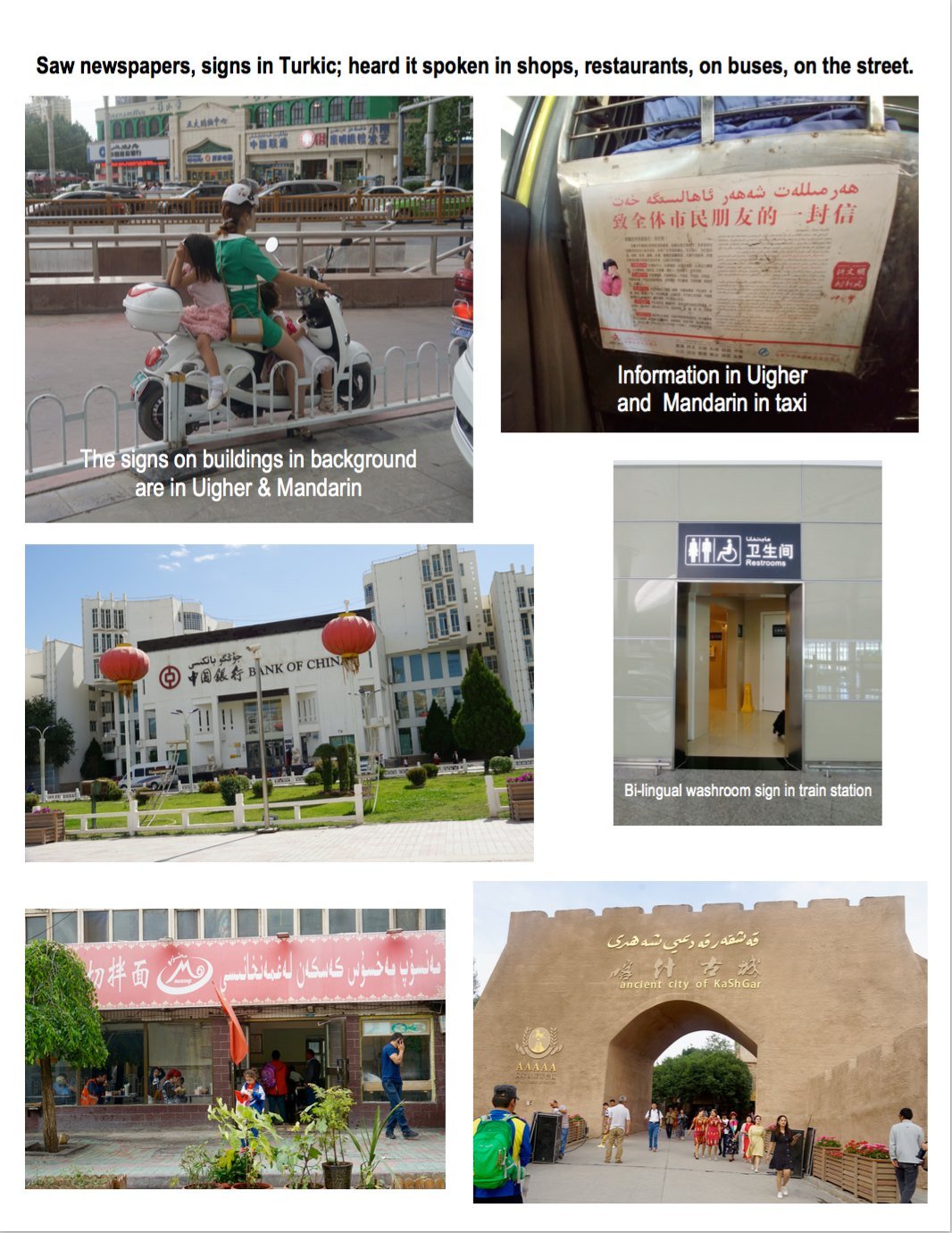 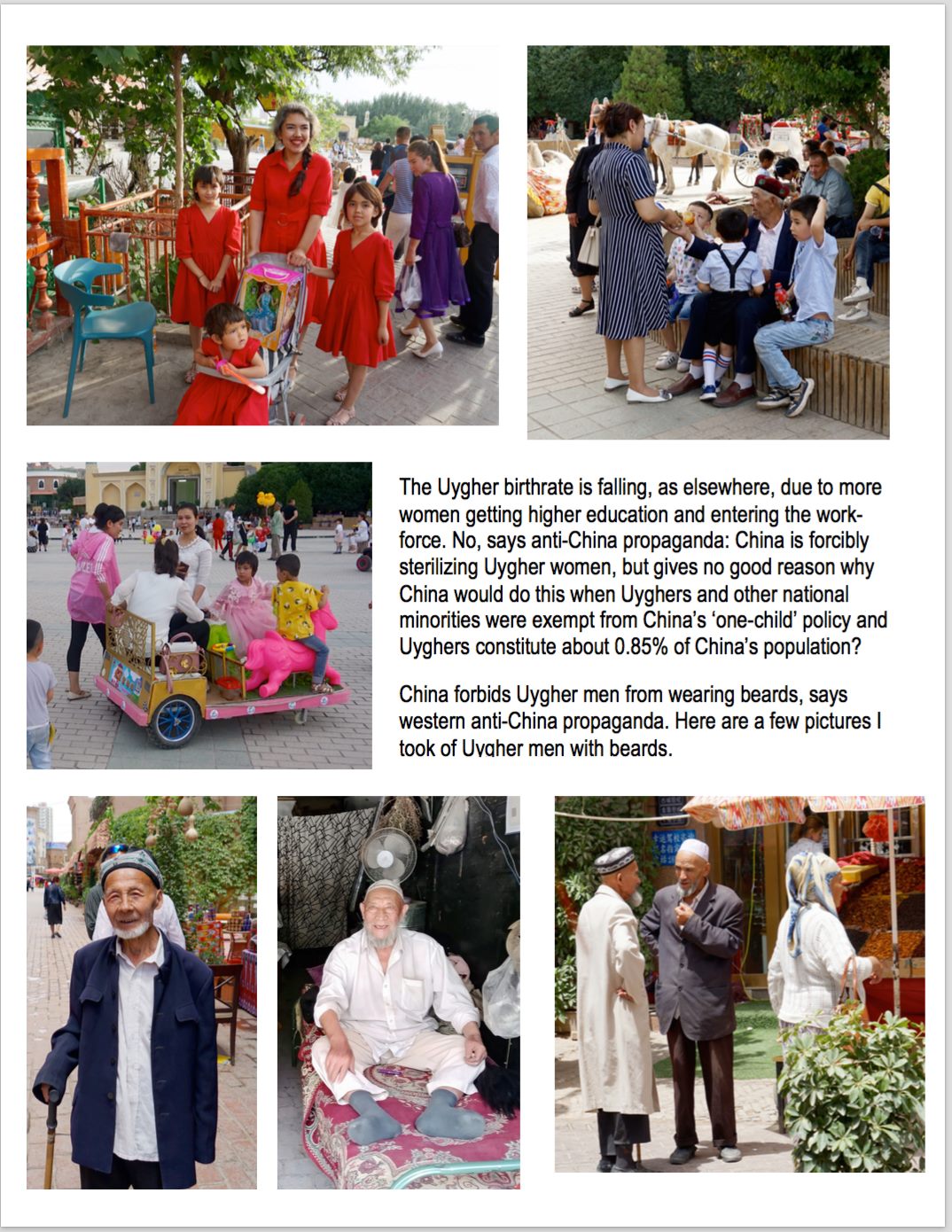 India and China are large countries with virtually the same number of people. India won independence from colonial rule in 1947; China from foreign rule, and from the rule of capital, in 1949. “Socioeconomically, China was worse off. According to the 2019-2020 CIA World Factbook, China’s GDP per capita, based on Purchasing Power Parity, was $16,100 while India’s was $6,700. (Pakistan $5,860, Bangladesh $4,700).

Economic development and growth in China started from the eastern seaboard. Xinjiang’s per capita GDP is $8,300 – still significantly above that of the three countries mentioned above and much, much higher than the poorer provinces in them. With input from China’s central government, Xinjiang’s economic growth rate is much higher in recent years and the gap between it and eastern China is expected to narrow considerably.

I visited Xinjiang for two weeks (and North Korea for ten days) in the summer of 2019. Shantytowns or children engaged in labour or in begging are a common sight in many countries of the global south. I thought the same would be true in Xinjiang too, but I didn’t see any.

Western mass media carries reports of China demolishing mosques. Few things would anger believers more than the destruction of their places of worship. There are 24,000 mosques in Xinjiang. What could China possibly gain by destroying one or two or three other than unremitting hostility from Uighurs?

Uighurs are not allowed to fast! How would that be even possible? I happened to be there during Ramazan. I didn’t see people being force-fed. I did see thousands of Uighurs eating freely in restaurants and public places during fasting – something that would invite violence by religious vigilantes in some Muslim majority countries. Are they forced to eat pork, I asked? People laughed at the absurdity of the question. I saw quite a few halal meat shops(as in the Muslim quarter of Xian during a previous visit) with carcasses, mainly of lambs, hanging in them. Pork was available in hotels and restaurants and larger grocery stores – as was liquor – mainly for the Han who live in Xinjiang and who visit in the tens of millions from other parts of China.

Is China suppressing the Uighur language – ‘linguicide’ some call it. China says no it isn’t and that schooling for Uighurs is both in Mandarin and Uighur. With my very own eyes I saw building signs and newspapers in the Arabic alphabet of the Turkic language the Uighurs use; with my own ears I heard Uighurs speaking the language openly in restaurants, on the streets, in public places.

Wikipedia says the ethnic composition of Xinjiang is 45.84% Uyghur, 40.48% Han, 6.50% Kazakh, 4.51% Hui, 2.67% Other. Uyghurs were more likely to be found in rural areas and small towns, Han in bigger cities. Within cities, Uyghurs and Han, generally speaking, lived in separate areas. It was the attempt to bridge these solitudes, someone said, that the experiment of the ‘buddy’ system – the ‘spy system’ according to western mass media – between the two communities was organized.

Security was much tighter Kashgar and Urumchi than in other cities of China that I have visited; for instance, not only airports and train stations but even hotel and many store entrances had metal detectors; cars entering gas stations were checked (for explosives, I suppose). Police presence was quite visible, especially in high tourist areas. Travel within Kashgar and Urumchi – by foot, by taxi, by public transportation – was unhindered. Intercity travel required special permission and there were check-points on the highways. Why? Because of scores of acts of terrorism in the past and to try and prevent them in the future was the reply.

China says it is a secular country with freedom to believe or not to believe. That, facing extremism and terrorism, it took measures – administrative, educational, economic and social – to combat them but does not discriminate, much less perpetrate violence, against Uighurs per se. Re-education campaigns, secular education, vocational training and more jobs would be a good start to fight fundamentalism and extremism afflicting many in quite a few countries.

Ever larger number of people understand that western mass media lies – especially about those whom it has deemed its ‘enemies. Yet, the power of the western mass media – its relentless, Goebbels like repetition of the big lie – is such that even left circles spend great amounts of time debating and fighting over this ‘persecution’ – even agreeing with it – at the cost of discussing and agreeing on how best to unite to fight capitalism and imperialism.

This also distracts from talking about the crimes of imperialism against Muslim peoples – from Afghanistan to Iraq, Libya to Syria, Palestine to Yemen, Iran to Lebanon – and others too like Cuba, Venezuela, Bolivia and Haiti, for instance, or about support of extremists like the ‘mujahideen’ of Afghanistan, DAESH in Syria– or the East Turkistan Islamic Movement in Xinjiang.

The focus on the ‘crimes’ of China also helps imperialism from distracting attention from the remarkable achievements of that country – and the criminal misrule of its own capitalist governments. Creating ‘enemies’ is a sure-fire way to win ever-larger budgets by the military-industrial complex. The left has usually been against hostile and tense international relations, against wars, cold and hot, against militarism and military expenditures. One hopes that it will see through imperialism’s game against China and take its rightful place in the peace movement.” 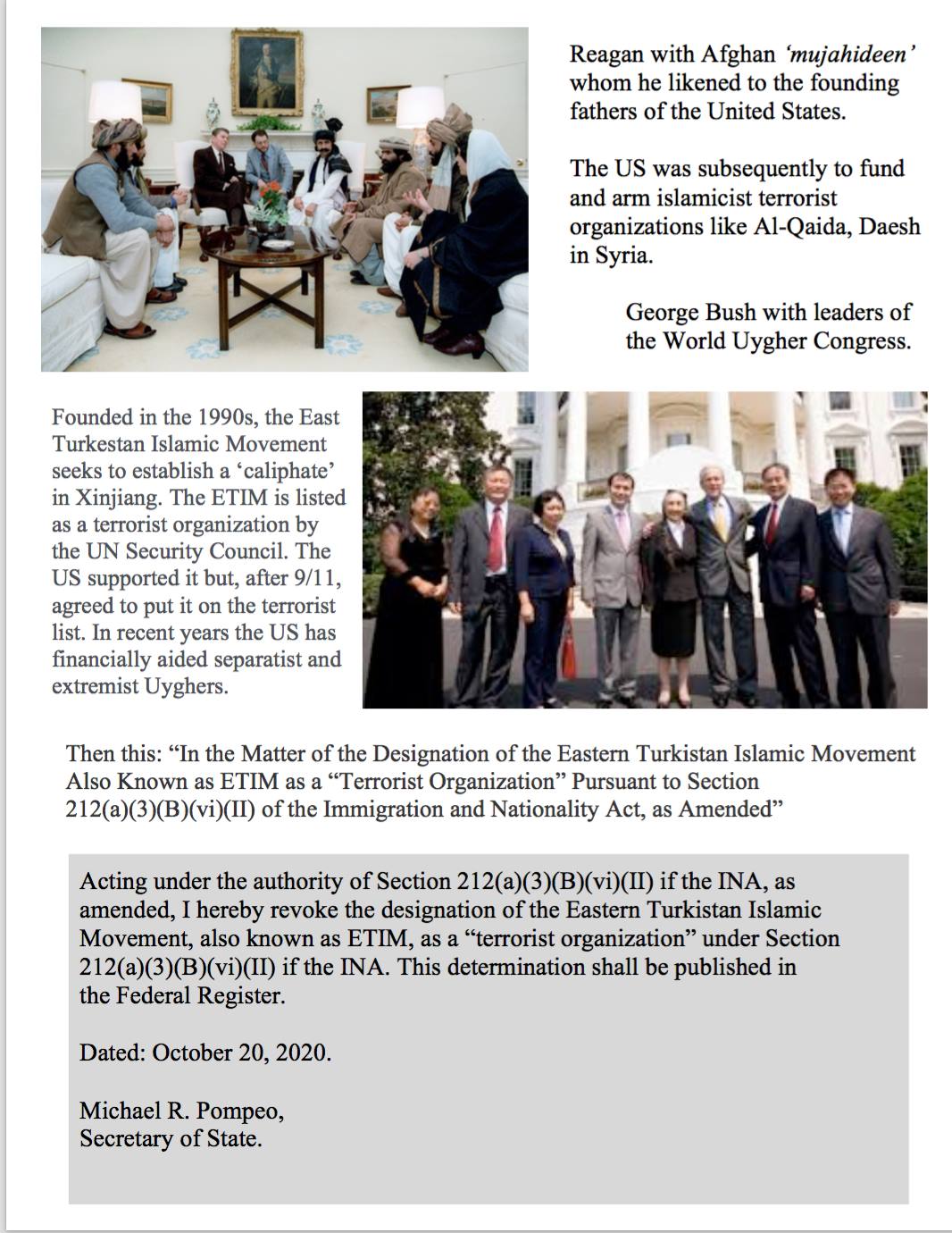 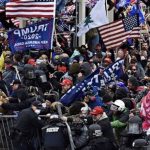 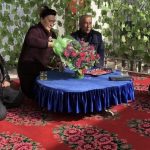