At the World Economic Forum in January 2022, Xi Jinping stated that the realisation of carbon neutrality is an “intrinsic requirement of China’s own high-quality development and a solemn pledge to the international community.”

Carlos Martinez reports that while the inertia of the market-led nations gives us terrifying forecasts for the planet, state socialism in the east has delivered on wind and solar energy, green infrastructure, electric vehicles, reforestation and carbon reduction.

This is a concise summary of the essay China is building an ecological civilisation, also by Carlos Martinez, published on the International Manifesto Group website, November 25, 2022.

The 2022 UN Climate Change Conference of the Parties (Cop27) has just drawn to a close. One of the defining themes of this year’s conference has been the insistent demand by the leaders of the global South for climate justice — for the wealthy countries to step up their financial and technological support to poorer countries, to help mitigate the effects of climate change and to speed up the transition to green energy systems.

Climate justice is not some sort of fringe radical notion; indeed, the principle of “common but differentiated responsibilities” is written into international law, and reflects the fact that over the course of 200 years, Europe, North America and Japan have burned enormous quantities of fossil fuels on their road to modernisation, creating an environmental crisis in the process. As agrarian sociologist Max Ajl puts it, “North Atlantic capitalism enclosed the atmosphere as a dump for its waste aeons ago.”

However, the world has as so far witnessed precious little of said climate justice. At the UN climate summit in Copenhagen in 2009, rich nations pledged to channel $100 billion a year to the least-developed countries to tackle environmental issues. Even though this pledge is minuscule when compared with the level of investment actually needed, it has never been met.

The US spends upwards of $800bn a year on its military, but apparently it can’t afford to help fix the problems it’s had such an outsized role in creating (bear in mind that the US, with 4 per cent of the global population, is responsible for 25 per cent of historic carbon dioxide emissions).

Although China is still a developing country, the reality is that it’s China rather than the advanced Western countries that’s providing key leadership on environmental issues.

China is already working with a large number of African, Asian and Latin American countries on green development projects, including in Zambia, South Africa, Kenya, Argentina and Cuba.

Nigerian journalist Otiato Opali writes: “From the Sakai photovoltaic power station in the Central African Republic and the Garissa solar plant in Kenya, to the Aysha wind power project in Ethiopia and the Kafue Gorge hydroelectric station in Zambia, China has implemented hundreds of clean energy, green development projects in Africa, supporting the continent’s efforts to tackle climate change.” 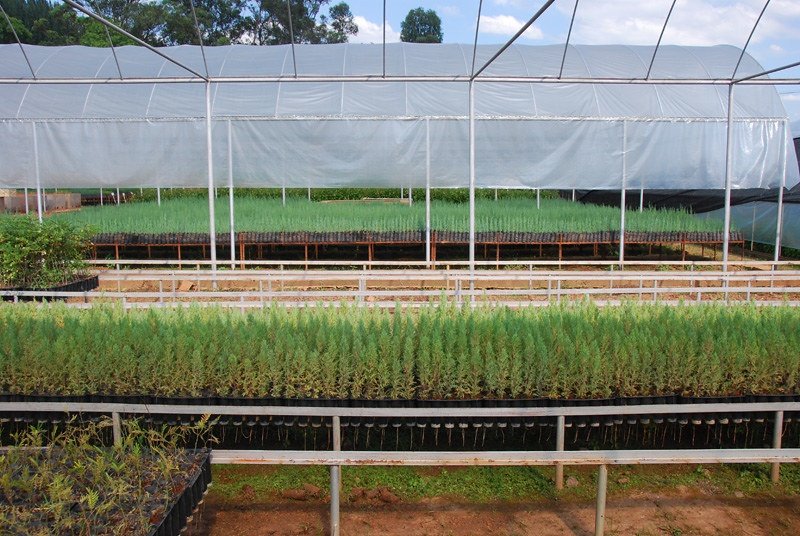 Green shoots: Hundreds of seedlings nurtured carefully in a nursery, ready for the reforestation of mountains near the Yantze River in Sichuan (CC: Flickr — Autan)

At home, China has been aggressively pursuing decarbonisation for over a decade. In his address to the UN general assembly in 2020, Xi Jinping announced two major goals agreed by the Chinese government: to hit peak carbon dioxide emissions before 2030 and to achieve carbon neutrality before 2060.

China has reiterated its goals on carbon peaking and neutrality many times, formulating a detailed action plan around them and incorporating them into law. At the World Economic Forum in January 2022, Xi stated that the realisation of carbon neutrality is an “intrinsic requirement of China’s own high-quality development and a solemn pledge to the international community.”

China’s goals are of historic significance. Columbia University professor Adam Tooze enthused that, with Xi’s 2020 announcement, “China’s leader may have redefined the future prospects for humanity… As the impact of his remarks sank in, climate modellers crunched the numbers and concluded that, if fully implemented, China’s new commitment will by itself lower the projected temperature increase by 0.2-0.3 °C. It is the largest favourable shock that their models have ever produced.”

In the 15-year period from 2007 to 2022, coal’s share of the power mix in China has gone from 81 per cent to 56 per cent, putting China in the same range as Australia — a wealthy, advanced country which could and should have begun its low-carbon transition decades ago.

At the same time as reducing its use of coal, China is rapidly becoming the first renewable energy superpower, accounting for 46 per cent of new solar and wind power generating capacity in 2021.

International energy analyst Tim Buckley observes that China is the world leader in “wind and solar installation, in wind and solar manufacturing, in electric vehicle production, in batteries, in hydro, in nuclear, in ground heat pumps, in grid transmission and distribution, and in green hydrogen.” In summary, “they literally lead the world in every zero-emissions technology today.”

China has also been pushing forward in wind power domestically, with data indicating that “China now operates almost half of the world’s installed offshore wind, with 26 gigawatts of a total of 54 gigawatts worldwide” — a statistic that recently prompted Elizabeth Sawin, co-director of US climate think tank Climate Interactive to remark: “While the US can’t quite agree to build back better, China just builds better.”

Further, China is making important progress in decarbonising transport, with more high-speed rail miles than the rest of the world combined. Currently, 59 per cent of China’s urban public buses are fully electric, up from 16 per cent in 2016. Around 98 per cent of the world’s electric buses are in China.

Meanwhile, China is carrying out the largest reforestation project in the world, planting forests “the size of Ireland” in a single year and doubling forest coverage from 12 per cent in 1980 to 23 per cent in 2020 — sadly the global trend is in the opposite direction. 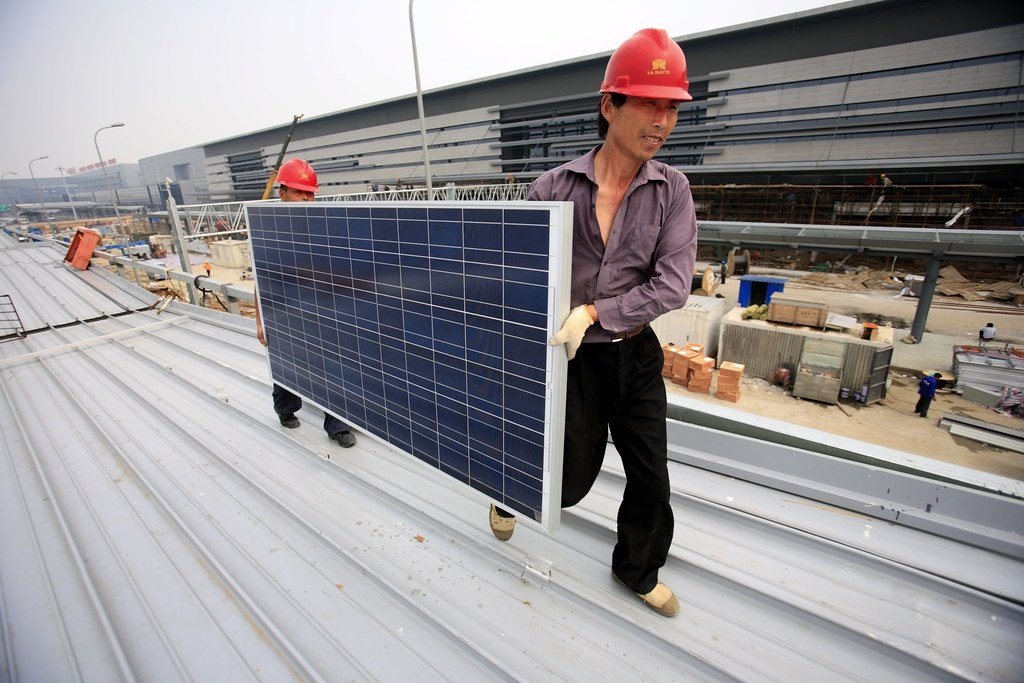 Socialism is the key

As John Bellamy Foster has noted recently: “While China has made moves to implement its radical conception of ecological civilisation, which is built into state planning and regulation, the notion of a Green New Deal has taken concrete form nowhere in the West.”

Scientists have understood the issues surrounding climate change for a long time. The UN Framework Convention on Climate Change, with its objective of “stabilising greenhouse gas concentrations in the atmosphere at a level that would prevent dangerous anthropogenic interference with the climate system,” was adopted in 1992 and ratified by 154 countries.

And yet precious little progress has been made at a global level. Indeed, more than half of all carbon dioxide emissions in the industrial era have been generated in the three decades since then.

This lack of progress seems inexcusable. Humanity has done almost nothing in the face of a global existential crisis, and the reason is simply that the dominant economic system in the world is capitalism. When a society is organised primarily around the pursuit of private profit, rather than addressing the long-term needs of humanity, the question of saving the planet will never be the top priority.

China’s economic development proceeds according to state plans, not market anarchy. The interests of private profit are subordinate to the needs of society.

China’s enormous investments in renewable energy, energy efficiency, electric vehicles, reforestation and circular waste management have largely been made by state banks, and its projects carried out largely by state-owned enterprises, according to strategic guidelines laid out by the government.

The power of example

Those in the major capitalist countries should take inspiration from China’s example in addressing the ecological crisis, and feed this inspiration into a powerful mass movement capable of effecting the meaningful change that humanity desperately needs.

Just as progress made on social welfare in the European socialist countries in the mid-20th century created tremendous pressure on the capitalist ruling classes to grant concessions to the working class (in the form of universal education, social housing and healthcare systems), so can China’s environmental strategy in the 21st century create pressure on the capitalist ruling classes to stop destroying the planet and commit to climate justice.

China has emerged as the undisputed leader in the fight against climate breakdown, and the results of this leadership are reverberating globally. It would be difficult to overstate the profound significance of this for our species and planet. 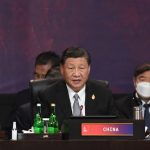 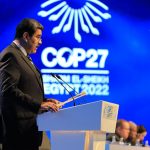