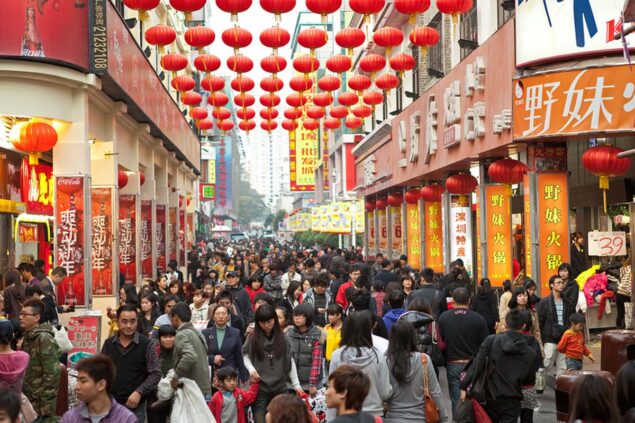 Much has been made recently of the slowdown in population growth in China.  China’s population grew at its slowest rate in decades in the ten years to 2020, according to the latest census data, which also showed that births declined sharply last year.

Much has been made recently of the slowdown in population growth in China.  China’s population grew at its slowest rate in decades in the ten years to 2020, according to the latest census data, which also showed that births declined sharply last year. The nation’s once-in-a-decade census, which was completed in December, showed its population increased to 1.41bn in 2020 compared with 1.4bn a year earlier.  The population grew just 5.4% from 1.34bn in 2010 — the lowest rate of increase between censuses since the People’s Republic of China began collecting data in 1953.  Those over-65s now make up 13.5% of the population, compared with 8.9% in 2010 when the last census was completed.

This has led many China observers and Western economists to argue that China’s phenomenal growth rate that has taken over 850m Chinese out of poverty (as officially defined) is now over.  The argument is that living standards have only risen for the average Chinese because China brought its huge workforce from the land and into the factories in the cities to produce goods for exports at low prices.  Now with an ageing population and falling working-age population, China’s economy will flag.  Given falling working population, along with an intensifying campaign by the US and its Western allies to isolate China economically and technically, China’s growth story is over. 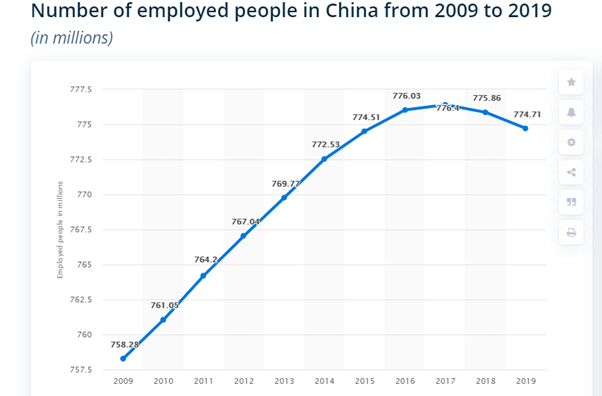 In a previous post, I have argued against the sceptics who reckon that China cannot achieve growth rates of say 5-6% a year over the remainder of this decade, or more than twice the rates forecast for the major capitalist economies (the US Congressional Budget Office forecasts just 1.8% a year for the US).

For a start, while China’s labour productivity growth rate has declined in the last decade, it was still averaging over 6% a year before the pandemic struck.  That compares with just 0.9% a year in the advanced capitalist economies.  Even if you accept the revisions made by The Conference Board to China’s productivity record (which I don’t: – see the post above), China still achieved an over 4% a year productivity growth in the last decade, some four times faster than in the advanced capitalist economies. 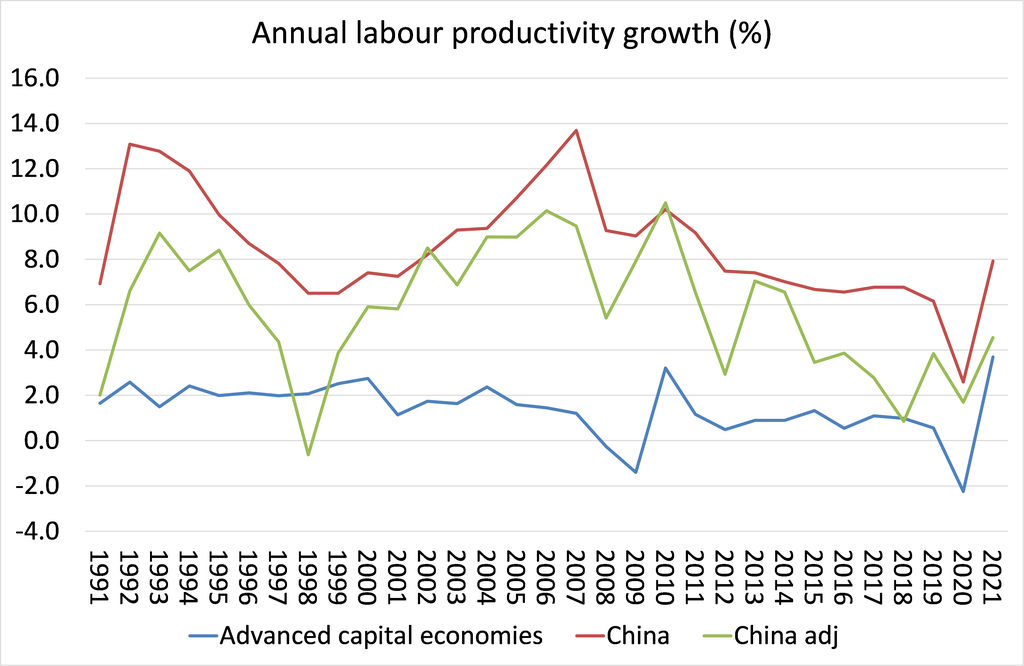 So even if the labour force does not grow in this decade (or even decline by say 0.5% a year), real GDP growth in China is still going to be at a minimum of 3.5% a year, and much more likely to be 5-6% a year, close to the Chinese government’s forecast in its latest five-year plan.

Ah, but you see, China cannot maintain previous productivity growth rates because its economy is badly imbalanced, so the latest argument of Western China ‘experts’ goes.  What is this imbalance?  Well, up to now China has grown fast partly because of its labour supply (which is no longer rising) and partly because of massive investment, led by the state sector, in industry, infrastructure and technology.

But now, continued expansion of investment can only be achieved by credit injections and rising debt.  And that lays the basis for either poor productivity growth or a debt crisis, or both in the next decade.  The answer, according to these experts, is that China should reduce its investment ratio (successful in boosting the economy) and switch to raising consumption and expanding service industries.

You might ask, how successful have capitalist economies been while their investment ratios have fallen back and consumption has dominated? Not at all. So this all smacks of the crude Keynesian view that it is consumption that drives investment and growth, not vice versa.  And behind this is also the ideological aim to reduce China’s state sector domination and push for a service sector dominated by capitalist enterprises (including foreign ones), particularly in banking and finance.

I have presented the arguments against this consumption model in a previous post on China, so I won’t repeat them here.  Suffice it to say that they don’t hold water. Indeed, as Arthur Kroeber, head of research at Gavekal Dragonomics, has put it: “Is China fading? In a word, no. China’s economy is in good shape, and policymakers are exploiting this strength to tackle structural issues such as financial leverage, internet regulation and their desire to make technology the main driver of investment.”  Kroeber echoes my view (as above) that: “On a two-year average basis, China is growing at about 5 per cent, while the US is well under 1 per cent. By the end of 2021 the US should be back around its pre-pandemic trend of 2.5 per cent annual growth. Over the next several years, China will probably keep growing at nearly twice the US rate.” 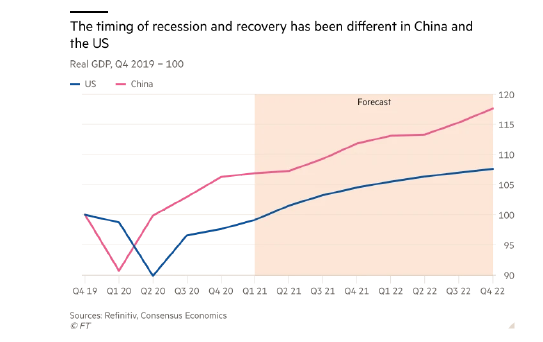 So there is no reason for China to abandon its growth model based on state-led investment in technology to compensate for the decline its workforce. 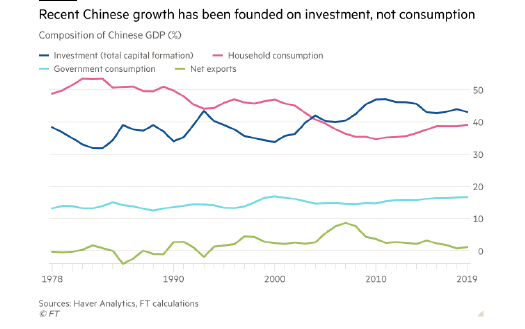 It has been the reason for its high productivity growth compared to the West in the last few decades and will continue to be so, as long as the government does not buckle to the siren words of the Western experts.  Those siren words have already led to the further opening-up of the financial sector to foreign companies and an increasing reliance of portfolio capital flows (namely financial investment) rather than productive investment.  Since 2017, foreign investors have tripled their holdings of Chinese bonds and now own about 3.5 per cent of the market. Equity inflows have been comparable. That makes for an increased risk of a financial bust and damage to China’s productivity performance.

The move to investment in technology rather than heavy industry and infrastructure is key to China’s sustainable growth rate and to reducing the rise in greenhouse gas emissions, where China is now the world leader. 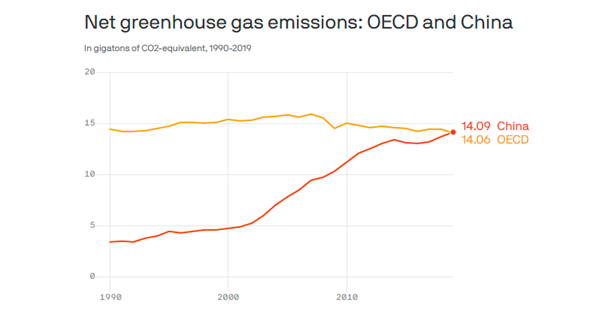 According to a recent report by Goldman Sachs, China’s digital economy is already large, accounting for almost 40% of GDP and fast growing, contributing more than 60% of GDP growth in recent years. “And there is ample room for China to further digitalize its traditional sectors”.  China’s IT share of GDP climbed from 2.1% in 2011Q1 to 3.8% in 2021Q1. Although China still lags the US, Europe, Japan and South Korea in its IT share of GDP, the gap has been narrowing over time. No wonder, the US and other capitalist powers are intensifying their efforts to contain China’s technological expansion.