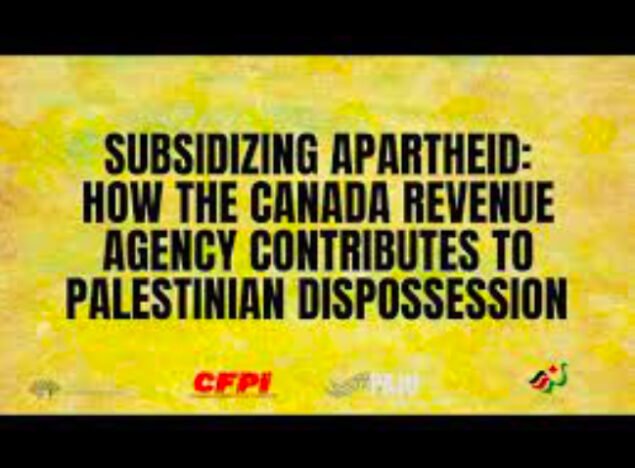 Researching registered charities is a window into the pathology of Canadian Zionism. The number, variety and sums raised by taxpayer-subsidized groups focused on Israel is remarkable. Does a country with a GDP per capita equal to Canada’s need this country’s taxpayers to subsidize 200+ organizations raising over a quarter billion dollars a year for it?

Researching registered charities is a window into the pathology of Canadian Zionism.

The number, variety and sums raised by taxpayer-subsidized groups focused on Israel is remarkable. Does a country with a GDP per capita equal to Canada’s need this country’s taxpayers to subsidize 200+ organizations raising over a quarter billion dollars a year for it? Is there really a need for a Canadian Friends of the Israel Guide Dog Center for the Blind? Or Canadian Friends of Dental Volunteers for Israel? Or Canadian Friends of Yad L’Achim, which campaigns against Jewish and Palestinian/Muslim intermarriage?

On September 4, Canadian Shaare Zedek Hospital Foundation published a full-page ad in the National Post. Why is a group that raises funds for a hospital in Israel spending tens of thousands of dollars advertising in a national Canadian newspaper?

While many facets of the Canada-Israel registered charity complex are bizarre, the push to link universities to the Israeli military in violation of Canadian tax law is particularly loathsome.

Among the various internationally focused groups granted charitable status — the ability to offer donors tax receipts — the Canada Revenue Agency (CRA) has a special category for international universities. The idea is that people should be able to get a tax deduction when donating to their alma mater or a university that would “ordinarilyinclude Canadian students in its student body.” In other words, Canadian taxpayers can subsidize educational institutions that train Canadians.

But when it comes to Israeli universities the number of groups and sums raised is far beyond individuals donating to their alma mater or the number of Canadians studying there. According to the report Who Gives and Who Gets: The Beneficiaries of Private Foundation Philanthropy, the single top recipient of private Canadian foundations between 2014 and 2018 was Israel’s Technion, which received $89 million. Tens of millions of dollars are raised annually for a dozen Israeli universities.

Most Israeli universities collaborate extensively with the IDF on research or training initiatives and the schools often boast about it. The Jerusalem College of Technology notes on its site, “the Israel Defense Force and JCT have a long-standing cooperative relationship.” For its part, Canadian Friends of Boys Town Jerusalem explains, “the two-year College of Applied Engineering was established at Boys Town four decades ago in cooperation with the Israel Defense Forces, to train practical engineers for army service.”

But registered charities are not allowed to support another country’s military. Groups financing Israeli universities that collaborate with the IDF may be violating Canadian charity law. But for many donors violating CRA rules indirectly is insufficient. A number of taxpayer-subsidized groups financing Israeli universities have projects that specifically support the Israeli military. Canadian Friends of Haifa University is listed as a funder of an initiative that “form the backbone of the IDF’s elite training program”. Technion Canada specifically allocates funds to strengthen that university’s ties to the Israeli military. In an April story titled “Helping Those Who Guard Israel” Technion Canada reported, “Brothers Richard (Rick) and Barry Sacks and their families are long time Technion supporters. They recently chose to help fund Technion’s Program to Support Students in the IDF, a unique program that provides specialized support to students whose education is interrupted by Miluim [reserve duty] service.”

CFHU directly promotes the IDF as well. In April 2018 CFHU Ottawa “launched the Ottawa Scholarship Fund in support of reserve duty soldiers studying at The Hebrew University.” At the event, according to CFHU’s annual report, “four students shared their inspiring stories from their military service and explained what it means to be a reserve duty soldier in the IDF.”

CFHU partnered with the Duvdevan Foundation on a number of scholarships and public relations initiatives. According to the Duvdevan Foundation, “the Duvdevan Unit was established in June 1986, with the understanding that a specific and intelligent warfare method needed to be developed to deal with Judea and Samaria’s [West Bank] security incidents… The Unit’s soldiers are engaged in ongoing operational activities, carry out nocturnal arrests, seize perpetrators, create ambushes, and many undercover operations.” CFHU has organized a number of fundraisers centered on presentations by former Duvdevan soldiers.

It is pathological for Canadians to be pushing Israeli universities to deepen their ties to the IDF. Why link education to a force that regularly kills Palestinians and bombs countries in the region? Why flaunt CRA rules? Why aren’t donors to Israeli universities simply content Canadian taxpayers are subsidizing their donation to a faraway university?