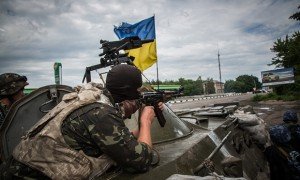 Recently, writer William Dunkerley published a commentary in which he made an evident observation–it is not the armies of Donbas (Donetsk and Lugansk) which have invaded Ukraine and bombed and killed its towns and citizens. Rather, he patiently explained, it is the army and extremist militias of Ukraine which have come to Donbas to rain down death and destruction. Somehow, this simple and self-evident observation just cannot seem to make it into the pages of The Guardian newspaper in the UK.

The newspaper’s seasoned writer, Shaun Walker, has penned a new article from Donetsk summarizing the fragile and frequently-violated ceasefire agreement of February 2015 in eastern Ukraine. Of all the complicated and evolving factors at play in the conflict in Ukraine, it is still the ‘blame Russia’ narrative that stands out in The Guardian.

Although Shaun Walker traveled to Donetsk to write his article, don’t expect to read much in it about the grim humanitarian consequences of Ukraine’s ongoing war and economic blockade against Donbas.

Read the article here: Ukraine ceasefire: ‘There is shooting all the time’, by Shaun Walker, The Guardian, June 30, 2015

Read also:
*  An all-too typical daily situation report of the ceasefire violations by Ukraine in Donetsk and Lugansk, for June 30, 2015, on Novorossiya Today

*  And from the daily report for June 30 of the Kyiv-biased Special Monitoring Mission (SMM) of the Organisation for Economic Security and Cooperation in Europe:

The fighting at and around Donetsk airport continued with increased intensity compared to the previous days. Between 9:03 and 13:00hrs, at the Joint Centre for Control and Co-ordination (JCCC) observation point at Donetsk central railway station (“Donetsk People’s Republic” (“DPR”)-controlled, 8km north-west of Donetsk city centre), the SMM heard and saw 168 explosions consistent with mainly mortar and tanks rounds. Of those, 109 explosions occurred north and north-west of Spartak and of Donetsk airport (both “DPR”-controlled), in the area between government-controlled and Opytne, Butrovska mine and Muraveynyk (both government-controlled) at a distance of 3-7km from the SMM position. Another 39 explosions occurred 10-15km north-east of the SMM position.[1]

From a position at the eastern outskirts of Berdianske (government-controlled, 1.5km west of Shyrokyne, 20km of Mariupol), the SMM heard small arms, heavy machine gun and recoilless machine gun fire and 2.5km east of its position, as well as outgoing 82mm mortar shells originating 320m south-east of its position, impacting – according to SMM’s estimate – in the area of the village of Sakhanka (“DPR”-controlled, 24km east-north-east of Mariupol). During the afternoon the situation deteriorated. Whilst in the northern part of Sopyne (government-controlled, 3.5km south-west of Shyrokyne, 16km east of Mariupol) the SMM heard outgoing mortar shells north-west of its position. Due to security reasons, the SMM moved further away to a position at the junction (government-controlled, 15km east, north-east of Mariupol) of Sopyne-Lebedynske road and highway E58, from where the SMM heard 42 outgoing artillery shells at 1km south-south-west, as well as eight incoming shells at 3km east-north-east of its position. Due to the deteriorating security situation, the SMM left the area. On the way back to the base in Mariupol, the SMM saw some fresh impacts on the Sopyne-Lebedynske road.

In addition, an SMM unmanned aerial vehicle (UAV) spotted in “DPR”- controlled areas north-east of Mariupol five artillery pieces and one mortar position. In government-controlled parts of Mariupol area the UAV spotted two MBTs and six howitzers (likely 122 mm D-30) as well as persons unloading ammunition from a truck next to these howitzers. At the same site about one hour later the UAV was able to film three howitzers firing and some seconds later shells exploding in “DPR”-controlled Sakhanka, about 10km east-north-east away from the howitzer position.

In Opytne (government-controlled, 43km north of Donetsk), the SMM saw approx. 80 pedestrians (many carrying luggage), waiting to be processed at the Ukrainian Armed Forces checkpoint to Artemivsk. People crossing the checkpoint told the SMM that since public transport was not admitted to cross the contact line any longer, their bus had left them at 24km from the checkpoint, from where they had walked, as very few could afford to take a taxi.

Although the SMM observed only one ceasefire violation in the Luhansk region, the overall situation remained tense.

In government-controlled Stanytsia Luhanska (16km north-east of Luhansk) the SMM spoke with a middle aged woman who stated that she had participated in a peaceful protest that took place in front of the district administration building on 30 June. According to the interlocutor, about 300-400 protestors had presented a petition raising their concerns, such as on-going shelling, lack of electricity, problems with mobile phone coverage and lack of the freedom of movement due to the closure of the bridge. The petition had been signed by some of the protestors and it had been read out to the head of the district administration.

The SMM revisited three “DPR” heavy weapons holding areas whose locations comply with the respective withdrawal lines. At the first holding area, one howitzer was away for training according to the “DPR” member. The SMM found two self-propelled howitzers (Gvozdika) and five artillery pieces (152mm). At the second site all previously recorded multiple launch rocket system (MLRS, BM-21 Grad) were in situ, but two howitzers (D30 122mm) were missing. At the third site the SMM found all previously recorded heavy weapons in situ. 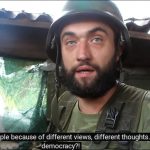 Video report from the front lines of the war in DonetskDigest, Ukraine, Video 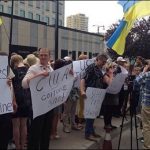