‘Ceasefire’ in Donetsk as seen by residents of Oktyabrsky Township 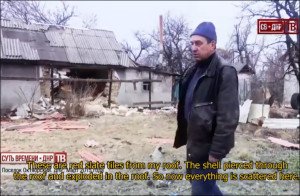 The residents of Oktyabrsky Township near Donetsk city talk to video journalists in March 2015 about how the situation has changed little for them since the beginning of the ceasefire declared on February 14, 2015. Journalists capture images of the shocking damage which residents’ houses and neighbourhoods have suffered from the random shellings by Ukrainian armed forces during 2014 and early 2015.

The current situation of the so-called ceasefire? “They shell at night mostly. During the night and at daybreak.”