Ceasefire and evacuations for eastern Aleppo are proceeding, with interruptions

Introduction by New Cold War.org:
News reports on the situation in and around Aleppo are enclosed.

There is a confusing narrative presented in the reports, deliberate or not. No distinction is made between the two,  distinct and different evacuations taking place from eastern Aleppo.

The largest evacuation is the movement of residents choosing to locate in government-controlled western Aleppo and farther afield, where they receive medical care and shelter.

The other, much smaller evacuation is part of the ceasefire agreement by the Syrian government with the paramilitary forces who have been waging a regime-change war for the past five years. The paramilitaries are backed by the Western powers and Gulf states. Exclusive attention is paid to THIS side of the story of the evacuations; nearly nothing to the other side. 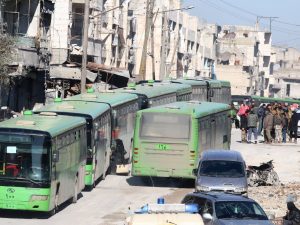 A new deal has reportedly been reached between the Syrian government and the militants in the city of Aleppo to resume the evacuations of civilians and the remaining armed groups from the east of the city, after an earlier halt in the evacuation operations.

Evacuations were suspended on Friday after the militants fired on corridors set up to let out the civilians and militants in eastern Aleppo and prevented residents from leaving the two militant-besieged villages of Fua’a and Kefraya in Idlib Province despite an agreement reached the day before.

Reports on Saturday quoted Syrian government sources as saying that the new deal would see a resumption of the evacuations. The fresh deal was reportedly reached after the militants agreed to allow residents out of the two villages.

Thousands have already been transferred out of Aleppo, where full government control was recently restored, before the suspension of the deal on Friday.

Earlier on Saturday, Syria’s armed opposition had said that a new agreement was struck to complete the evacuations from the militant-held areas of eastern Aleppo. Al-Farouk Abu Bakr, a Syrian militant, told news channel al-Arabiya al-Hadath on Saturday that the deal included an evacuation from the two villages in Idlib as well as from the towns of Madaya and Zabadani.

The so-called Syrian Observatory for Human Rights, a pro-opposition monitoring group, said some 4,000 people, including injured ones, could be evacuated from the villages starting from Saturday.

Meanwhile, Syrian state television said that the militants in the villages of Zakiya and Deir Khabieh in the southwestern countryside of the capital, Damascus, have also laid down their weapons and surrendered to the Syrian authorities as part of another deal between the two sides.

The news comes as the Syrian troops continue to advance against the militants in the countryside of Damascus.

The foreign-sponsored conflict in Syria, which started in March 2011, has claimed the lives of more than 400,000 people, according to an August estimate by UN Special Envoy for Syria Staffan de Mistura.

ALEPPO/HAMA, Syria – The agreement on evacuating militants and weapons from the eastern neighborhoods of Aleppo city has been suspended after terrorist groups breached it, special sources told SANA correspondent in Aleppo.

The sources said that the suspension of the agreement will remain in place until obtaining guarantees that oblige the terrorist groups to abide by all the agreement’s provisions, stressing on the Syrian side’s full adherence to the agreement and its keenness to end the bloodshed and restore security and stability to the entire city of Aleppo.

Earlier, a SANA reporter said that the terrorist groups have breached the agreement as they smuggled heavy weapons, including TOW missiles, heavy machine guns and kidnapped people via the buses and cars transporting terrorists and their families towards the southwestern countryside of Aleppo city.

The reporter added that the terrorist groups fired shells and sniper bullets on the buses and ambulances at al-Ramousseh crossing, noting that the Syrian Arab Red Crescent (SARC) and the International Committee of the Red Cross (ICRC) which are supervising the evacuation process had to withdraw all buses and cars from the crossing.

Over the past 24 hours, some 8079 terrorists and members of their families were evacuated on ten batches via busses and ambulances from the neighborhoods of Salah-Eddin, al-Ansari, al-Mashhad and al-Zibdiyeh to the southwest countryside of Aleppo city.

A blast that hit a police station in a southwestern neighborhood of the Syrian capital Damascus was carried out by a child wearing an explosive belt, according to SANA news agency. No one except the girl was reportedly killed in the attack.

RT’s Lizzy Phelan, reporting from Syria, says state television has aired pictures of a girl who was allegedly a suicide bomber. There are no other casualties except for a police officer who has minor injuries, Phelan said in a tweet.

The suicide bomber was an eight-year-old girl, and no one except her was killed, SANA news agency reported, citing a source at Damascus Police Command.

“Terrorists sent an eight-year-old girl with a small homemade bomb to a police station in the Midan neighbourhood,” the source said. “When she entered the building, militants activated the explosive device with a remote control, the child died at the scene, one police officer suffered light injuries.”

No one has claimed responsibility for the attack as yet.

Report from east Aleppo on Dec 12, by Vanessa Beeley

On the morning of the 12th December we headed for Sheikh Saeed in East Aleppo. This area had been the scene of very fierce fighting between the Syrian Arab Army and their allies, particularly Hezbollah and the terrorist factions that have brutally occupied East Aleppo for the last four years. Terrorist factions such as Nusra Front [Al Qaeda], Nour al Din Zinki [child beheaders] Ahrar Al Sham [ethnic cleansers of all minorities in areas they occupy] and other lesser militants, all funded and armed by NATO and Gulf states and focused upon wholesale destruction of Syrian infrastructure and the abuse, imprisonment & massacre of the Syrian people.

The whole area had only been fully liberated the day before. There was still a large degree of tension on the ground and Syrian and Russian jets were still flying overhead, gunshot and mortar fire can be heard in the video. The destruction was shocking.

We were taken up on to a rooftop for the Syrian military press briefing. While the commander was talking to the press, a young Syrian Army soldier came to speak to me…

Do these young men, fighting for their country, their families and their people, really look as if they are capable of then executing, raping and murdering the people they would give their lives to save from their incarceration under a NATO and Gulf state imposed terrorist regime? [View video, two and a half minutes, at weblink above.]