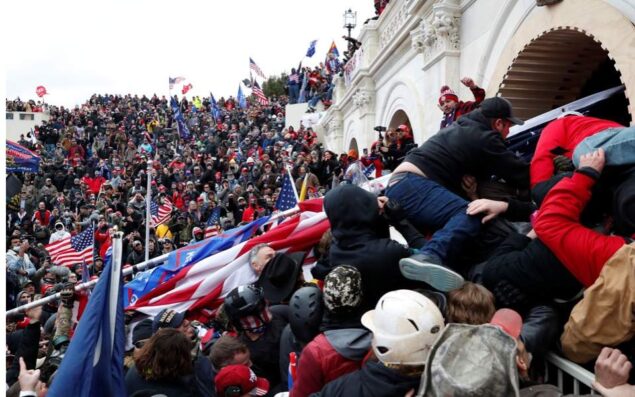 The storming of the Capitol may just be a harbinger of things to come.

With the normalization of mass shootings in the United States it is more than understandable that members of Congress feared for their lives when they learned protestors had forced their way into the Capitol in unknown numbers and were roaming around at will.

But by the time it was over we knew that: only five weapons were seized by police so most of the intruders were probably unarmed; the only shots fired were by police who killed an unarmed female protestor; video and photos showed the demonstrators taking pictures of chambers and art work like they were tourists; and the occupiers were peacefully led out of the Capitol six hours later.  (Had they been anti-racism protestors one wonders how differently it would have ended.)

A dramatic event such as this is an old-time reporter’s dream, to just describe the facts and details as they emerged, painting a picture in words in print or on the radio. With so many mobile phone pictures and video as well as TV cameras everywhere, that journalistic function has been greatly diminished if not extinguished. In its place are moralizing, partisan, editorialists masquerading as mainstream journalists.

By the time it was over it was clear what had not happened:  it wasn’t a “coup,” it wasn’t an “insurrection,” it had nothing to do with Putin, or China or Iran and it wasn’t like Pearl Harbor, as Sen. Chuck Schumer ridiculously tried to call it.

It wasn’t the storming of a “temple of democracy,” interrupting Congress’ “sacred duty,” or “desecrating” the “hallowed halls” of the Capitol. Such quasi-religious rhetoric inflates the self-importance of officials elevating themselves above the people they are supposed to serve.

It was not the storming and occupation of the Japanese Embassy in Lima, Peru in 1996 or the 1985 seizure of the Palace of Justice in Bogota, Colombia.

It was in some ways the downtrodden forcing their existence into the faces of an elitist Congress who serve very powerful interests instead.

But it was also the delusive manipulation of desperate people by Donald Trump, a master manipulator who for his own interests has somehow convinced millions of Americans that he is their champion whose re-election was stolen from them, even when it is doubtful their lives were much improved over the past four years.

What this event did is send a message, which went beyond claims of a stolen election, a message that no one in Congress or the media will openly acknowledge, if they’ve gotten the message at all, namely, that as long as Congress and the rest of the Establishment continue to ignore ordinary Americans’ interests and serve only their own, the anger and the desperation in the land will explode, rendering Wednesday’s events merely a dress rehearsal for what may well turn into a full-blown insurrection.  Congress must understand this before it’s too late.

Headline photo: Pro-Trump protesters storm into the U.S. Capitol during clashes with police, during a rally to contest the certification of the 2020 U.S. presidential election results by the US Congress, in Washington, U.S, January 6, 2021. [Shannon Stapleton/Reuters]