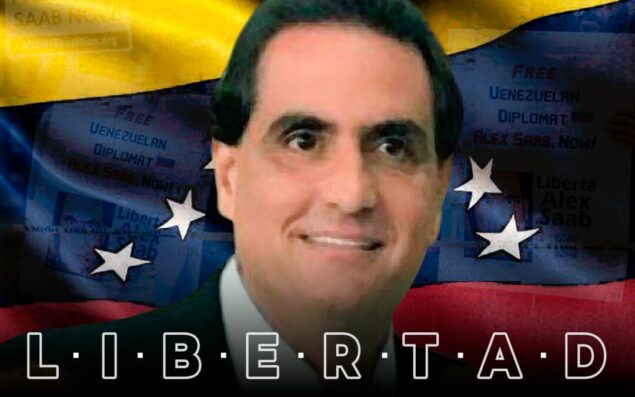 While the US government is guilty of judicial kidnapping in the cases of Venezuelan Alex Saab and Chinese Meng Wanzhou, the Canadian government is implicated in the shameful detention of the Chinese businessperson and its promotion of extra-parliamentary regime change in Venezuela.

While the US government is guilty of judicial kidnapping in the cases of Venezuelan Alex Saab and Chinese Meng Wanzhou, the Canadian government is implicated in the shameful detention of the Chinese businessperson and its promotion of extra-parliamentary regime change in Venezuela.

So far, the case of Venezuelan diplomat Alex Saab has not yet resulted in his freedom. Russia, Iran, and Cuba have all condemned his recent kidnapping of Ambassador Saab. China had already spoken out against his arrest and extradition from Cape Verde. The day after the Saab kidnapping, Pope Francis criticized the use of unilateral coercive measures in countries with strong social movements for change.

Alex Saab was kidnapped to the US on October 16, after having been imprisoned in Cape Verde under US orders since June 12, 2020. Mr. Saab was trying to buy humanitarian supplies for Venezuela in legal international trade but in violation of illegal US sanctions.  Mr. Saab had been travelling to obtain food, fuel and medicine for Venezuela suffering from murderous illegal US sanctions against his country. His case raises dangerous precedents in terms of extraterritorial judicial abuse by the US in enforcing its unilateral coercive measures on Venezuela and on some three dozen other countries, comprising a third of humanity.

Venezuelan President Maduro made a passionate speech in Caracas in support of Mr. Saab the day after the diplomat was kidnapped by the US. Camila Fabri, Mr. Saab’s wife, also made a moving speech (see the above video).

President Maduro alluded to the months of torturous conditions suffered by Mr. Saab, isolated in filthy conditions without treatment for his cancer. Interrogators tried to extort sensitive information on how Venezuela has evaded some of the illegal sanctions such as the shipping of Iranian oil to Venezuela in May 2020. Now that Mr. Saab is in US custody, there is justified concern about US special techniques of interrogation, well known throughout the world.

Mr. Saab was arraigned in a Florida Court on October 18. Shackled and force to wear an orange jumpsuit, the staged political theatre on Zoom sought to portray him as a fugitive criminal. The US court charged him with money laundering and defrauding the government of Venezuela.

Is it not rather strange that the US is indicting the diplomat Alex Saab for alleged crimes committed in Venezuela against a country that is an enemy of the United States, which is suffering from the US’s murderous unilateral coercive measures? In Venezuela, however, Mr. Saab is considered innocent and a national hero.

Is this not the US that is interfering in the internal affairs of Venezuela with nefarious judicial overreach? Is not the US the real criminal, guilty of crimes against humanity against the people of Venezuela?

His lawyers protested the surrender of Alex Saab to the US on a date prior to the final and unappealable decision granting the extradition. His case had not been transferred to the lower court for decision on the pending issues and for the issuance of the competent warrants of dismissal, constituting a flagrant illegality, and disregard for the rules of international law.

That Cape Verde agreed to extradite a special envoy and deputy ambassador, who is entitled to immunity and inviolability, sets a dangerous precedent. Centuries of long-established customary international law have been brushed aside by the US, with the complicity of Cape Verde.

Why the US is persecuting Alex Saab

Indeed, Washington only kidnapped or extradited Alex Saab because he has been instrumental in circumventing the illegal blockade of a country targeted by the US for regime change.

The reason the US is persecuting Alex Saab, revealed by Forbes, is because he is “the key that unlocks the Venezuelan monetary mystery—that is, how a country facing sanctions from the US, the UK and the European Union—is still able to export things like gold and oil…and really the only man who can actually explain how the country [Venezuela] survives today.” As the New York Times admits: “If Mr. Saab were to cooperate with American officials, he could help untangle Mr. Maduro’s economic web.”

The US has extradited Saab to use whatever means necessary to extract sensitive information from him. Saab already reports that his surrogate captors in Cabo Verde had unsuccessfully employed torture to try to break his will and induce him to betray Venezuela.

After an exhaustive investigation by Swiss prosecutors of the US charge that Saab had used Swiss banks for “money laundering,” the case was dropped. Still the US accuses Saab of “loot[ing] hundreds of millions of dollars from starving Venezuelans,” when this is precisely, admittedly, and purposely what the US blockade is doing.

Over 100,000 Venezuelans have perished due to lack of food and medicine. Apologists for the US blame the government of Nicolás Maduro. But if the Venezuela’s Bolivarian Revolution was so corrupt and inefficient, the US would have no need to violate international law by imposing unilateral coercive measures to achieve its policy of regime change.

UN Special Rapporteur on unilateral coercive measures and human rights, Alena Douhan, urged the US and its allies to drop sanctions imposed against Venezuela. Yet Biden, seamlessly following Trump and Obama before him, justify the illegal sanctions on the incredulous grounds that Venezuela poses an “extraordinary threat” to US national security.

The United Nations has repeatedly condemned the use of unilateral coercive measures as a violation of international law. The UN Human Rights Committee has explicitly demanded the release of Alex Saab.

Under the Vienna Convention, a credentialed diplomat such as Saab has absolute immunity from arrest, even in the time of war. Saab has also appealed to the US 11th Circuit Court based on his diplomatic status. In response, Washington filed an application for an extension to reply in a legal delaying tactic to allow Saab’s extradition without recognizing his diplomatic immunity.

The African point of view

The regional Economic Community of West Africa (ECOWAS) Court, which has legal jurisdiction over Cabo Verde, where Saab was imprisoned on under US orders, demanded the diplomat’s release and payment to him of compensation.

AFBAR President Hannibal Uwaifo spoke of the need to take positive action to ensure respect for March 15 ECOWAS Court decision. Cape Verde is a member of ECOWAS, nominally accepts its jurisdiction, and even has a judge on the court. Yet Cape Verde did not the respect the court’s judgment regarding Alex Saab.

Canada and Cape Verde: subservient nations to the USA

Canadian and Cape Verde’s policies are similar. Canada should be criticized for its recent actions against Venezuela and China. Canada has been subservient to the US, under President Trump and now President Biden. The Canadian political class has failed to stand up for truth and justice.

Canada has played a leadership role in violating the sovereignty of Venezuela. In August 2017, the Lima Group was established as a structure outside of the Organization of American States (OAS), mainly because the OAS members refused to back Washington and Ottawa’s bid to interfere in Venezuelan affairs. It is even likely that the Canadian embassy in Caracas with a member of the RCMP was involved in planning an attempted coup in Venezuela in February 2015.

As Steve Lalla noted for The Canada Files, “the Lima Group is a Canada-led organization dedicated to the ouster of Venezuelan President Nicolás Maduro.” An October 2017 meeting held in Toronto urged regional governments to take steps to “further isolate Venezuela.” Sanctions related to Venezuela by Canada are enacted under the Special Economic Measures Act to implement a decision between Canada and the US of September 5, 2017, for economic measures against Venezuela.

But by this summer, what had been known as the Lima Group, led by Canada, became defunct. Peru’s new foreign affairs minister called the Lima Group the country’s “most disastrous” ever foreign policy initiative. Peru has recognized the Maduro government in concert with the United Nations and the vast majority of the world’s sovereign states.

Kidnapping a foreign executive for the USA: It’s the Canadian way

In a clear case of judicial kidnapping on the USA’s behalf, Meng Wanzhou was arrested at the Vancouver International Airport on December 1, 2018, on a US extradition warrant for a crime allegedly committed in China, misleading HSBC Bank in China in violation of US sanctions on Iran. After some 1028 days and a mammoth international campaign to free her, the US effectively abandoned its dishonest charges. Ms. Meng pleaded not guilty and returned to a hero’s welcome in China on September 25.

Canada had followed US President Trump’s orders in the Vancouver kidnapping of the chief financial officer of the Chinese company Huawei. Trump wanted to use Meng Wanzhou to bargain with China in economic matters. Canada agreed to detain and extradite her while some eight other countries such as Mexico and Belgium refused. Canada seized her electronic devices and passwords and apparently illegally handed the material over to the FBI.

Ms. Meng was held in Canada with an electronic bracelet. She had committed no crime in Canada and none in the US but had only violated US illegal sanctions on Iran in her business affairs in Hong Kong. Canada continued the extradition proceedings even when it was evident to all, including the presiding judge, that she had done no wrong and had in no way misled the Hong Kong bank in her negotiations. Only when the case was falling apart and when the Biden administration agreed to allow her to leave with a not guilty plea, were the extradition proceedings terminated and she was liberated.

Canada and Cape Verde are two of a kind, sycophantic followers of orders coming from Washington. Canada is arguably worse because it is less vulnerable than the small and poor Cape Verde. Canadian politicians had not resisted the Meng Wanzhou arrest and have collaborated on US imperial policy against Venezuela.

The situation is dangerous, undermining the foundations of international relations and diplomatic immunity, extraterritoriality of criminal law and illegal coercive measures imposed by the against the will of most of the world community.

Who is next? The United States released its sanctions review on October 18, affirming it intends to further strengthen its sanctions policy to dominate even addition countries which wish to assert their legitimate sovereignty.

Through its illegal economic sanctions policy – really a form of warfare and just as deadly as conventional war – the US has weaponized hunger and disease. This must change.

John Philpot, recently returned from a meeting of the African Bar Association in Niger, is a Montreal-based attorney in international law.

Roger D. Harris, who visited Cabo Verde in June of this year as part of an international delegation to free Alex Saab, is with the humanitarian organization, Task Force on the Americas. Both authors are on the Campaign to Free Alex Saab and the Sanctions Kill Coalition.