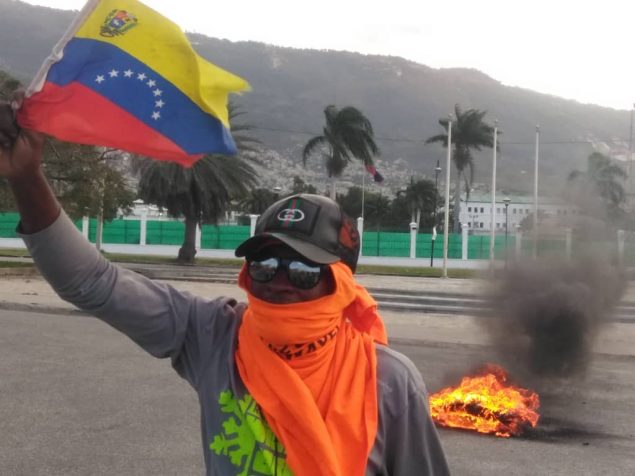 “If the dominant media was serious about holding the Canadian government to account for its foreign policy decisions, there would be numerous stories pointing out the hypocrisy of Ottawa’s response to recent political developments in Haiti and Venezuela. Instead silence, or worse, cheer-leading.”

If the dominant media was serious about holding the Canadian government to account for its foreign policy decisions, there would be numerous stories pointing out the hypocrisy of Ottawa’s response to recent political developments in Haiti and Venezuela.

Instead silence, or worse, cheer-leading.

Venezuela is a deeply divided society. Maybe a quarter of Venezuelans want the president removed by (almost) any means. A similar proportion backs Nicolas Maduro. A larger share of the population oscillates between these two poles, though they generally prefer the president to opposition forces that support economic sanctions and a possible invasion.

There are many legitimate criticisms of Maduro, including questions about his electoral bonafides after a presidential recall referendum was scuttled and the Constituent Assembly usurped the power of the opposition dominated National Assembly (of course many opposition actors’ democratic credentials are far more tainted). But, the presidential election in May demonstrates that Maduro and his PSUV party maintain considerable support. Despite the opposition boycott, the turnout was over 40% and Maduro received a higher proportion of the overall vote than leaders in the US, Canada and elsewhere. Additionally, Venezuela has an efficient and transparent electoral system — “best in the world” according to Jimmy Carter in 2012 — and it was the government that requested more international electoral observers.

Unlike Venezuela, Haiti is not divided. Basically, everyone wants the current “president” to go. While the slums have made that clear for months, important segments of the establishment (Reginald Boulos, Youri Latortue, Chamber of Commerce, etc) have turned on Jovenel Moïse. Reliable polling is limited, but it’s possible 9 in 10 Haitians want President Moïse to leave immediately. Many of them are strongly committed to that view, which is why the country’s urban areas have been largely paralyzed since February 7.

In a bid to squelch the protests, government forces (and their allies) have killed dozens in recent months. If you include the terrible massacre reported here and here in the Port-au-Prince neighborhood of La Saline on November 11-13 that number rises far above 100.

Even prior to recent protests the president’s claim to legitimacy was paper-thin. Moïse assumed the job through voter suppression and electoral  fraud. Voter turnout was 18%. His predecessor and sponsor, Michel Martelly, only held elections after significant protests. For his part, Martelly took office with about 16 per cent of the vote, since the election was largely boycotted. After the first round, US and Canadian representatives pressured the electoral council to replace the second-place candidate, Jude Celestin, with Martelly in the runoff.

While you won’t have read about it in the mainstream media, recent protests in Haiti are connected to Venezuela. The protesters’ main demand is accountability for the billions of dollars pilfered from Petrocaribe, a discounted oil program set up by Venezuela in 2006. In the summer demonstrators forced out Moïse’s prime minister over an effort to eliminate fuel subsidies and calls for the president to go have swelled since then. Adding to popular disgust with Moïse, his government succumbed to US/Canadian pressure to vote against Venezuela at the OAS last month.

So what has been Ottawa’s response to the popular protests in Haiti? Has Global Affairs Canada released a statement supporting the will of the people? Has Canada built a regional coalition to remove the president? Has Canada’s PM called other international leaders to lobby them to join his effort to remove Haiti’s President? Have they made a major aid announcement designed to elicit regime change? Have they asked the International Criminal Court to investigate the Haitian government? Has Justin Trudeau called the Haitian President a “brutal dictator”?

In fact, it’s the exact opposite to the situation in Venezuela. The only reason the Haitian president is hanging on is because of support from the so-called “Core Group” of “Friends of Haiti”. Comprising the ambassadors of Canada, France, Brazil, Germany and the US, as well as representatives of Spain, EU and OAS, the “Core Group” released a statement  last week “acknowledging the professionalism shown by the Haitian National Police.” The statement condescendingly “reiterated the fact that in a democracy change must come through the ballot box, and not through violence.” The “Core Group’s” previous responses  to the protests expressed stronger support of the unpopular government. As I detailed  10 weeks ago in a story headlined “Canada backs Haitian government, even as police force kills demonstrators”, Ottawa has provided countless forms of support to Moïse’s unpopular government. Since then Justin Trudeau had a “very productive meeting” with Haitian Prime Minister Jean Henry Ceant, International development minister Marie-Claude Bibeau‏ declared a desire to “come to the aid” of the Haitian government and Global Affairs Canada released a statement declaring that “acts of political violence have no place in the democratic process.” Trudeau’s government has provided various forms of support to the repressive police that maintains Moïse’s rule. Since Paul Martin’s Liberals played an important role  in violently ousting Jean-Bertrand Aristide’s government in 2004 Canada has financed, trained and overseen the Haitian National Police. As took place the night Aristide was forced out of the country by US Marines, Canadian troops  were recently photographed  patrolling the Port-au-Prince airport.

Taking their cue from Ottawa, the dominant media have downplayed the scope of the recent protests and repression in Haiti. There have been few (any?) stories about protesters putting their bodies on the line for freedom and the greater good. Instead the media has focused on the difficulties faced by a small number of Canadian tourists, missionaries and aid workers. While the long-impoverished country of 12 million people is going through a very important political moment, Canada’s racist/nationalist media is engrossed in the plight of Canucks stuck at an all-inclusive resort!

The incredible hypocrisy in Ottawa’s response to recent political developments in Haiti and Venezuela is shameful. Why has no major media dared contrast the two?

Step aside USA, Canada is the new bully in our South American ‘backyard’ In “Black Book of Canadian Foreign Policy”