By John Helmer, published on his website Dances With Bears, April 4, 2017

Lieutenant-Colonel Mark Lubiniecki has been the commander of the Canadian military mission in western Ukraine since March. The location of his Canadian base at Starichy is as far west as it’s possible to be from the war front in the Donbass, beyond which the Canadians would be camping on Polish soil. 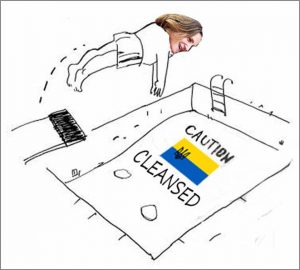 Like Canadian Foreign Minister Chrystia Freeland, Colonel Lubiniecki’s family is from this region known as Galicia (also as Volhynia). Instead of training local soldiers and giving speeches at cadet graduation ceremonies in Ukraine, Lubiniecki should be called back to Canada to explain what he is doing, and for whose benefit. Is the Canadian colonel training Galicians to fire rocket-propelled grenades at Polish targets?

Foreign Minister Freeland, appointed on January 10, was planning to make her debut at the NATO alliance conference of foreign ministers in Brussels last Friday. If the meeting had gone according to Freeland’s plan, she would have shaken the hand of Rex Tillerson, the new US Secretary of State, also making his debut at NATO; and promoted herself at the forefront of the Atlantic alliance’s war against Russia.

Instead, Tillerson ignored Freeland. She was consigned to a corner of the formal meeting photograph, at the extreme right of her counterparts from Lithuania and Albania.

More important politically, Freeland was upstaged from Toronto by Canada’s Prime Minister, Justin Trudeau. Before Freeland could speak to the Canadian media from NATO headquarters, Trudeau announced that Canada is doing enough for the military alliance and does not intend to raise its defence spending, as demanded by the US.  “Canada has always done more than its share in NATO and we will continue,” Trudeau was was reported  as saying by the Toronto Globe and Mail.  The newspaper, a booster for Freeland who represents a Toronto city constituency in parliament, led with the headline: “Trudeau stands firm amid fresh calls from U.S. for NATO spending boost”.

That’s Trudeau’s political code for Freeland to tone down her advocacy of escalating warfighting capacities against Russia, and let the prime minister do the policy-making instead.  For details of Freeland’s promotion of her family’s Galician homeland, and its claims to expanded territory and power in the Ukraine, read this…

Read the full article and view the related images at the original weblink above.