Canada is dispatching 200 soldiers to Ukraine in the latest rotation of troops who are training the Ukrainian military and paramilitary extremists to wage civil war in the east of that country. The training is conducted jointly with the U.S. and British militaries.

Canada is simultaneously taken on the role of leading one of the four, permanent ‘combat’ brigades that NATO is establishing at or near Russia’s borders with eastern Europe. It is stepping up its military intervention in northern Iraq, conducted jointly with the U.S. Canada’s government and military are also consulting with the United States as to where, exactly, they could station a desired expeditionary brigade of 600 soldiers to Africa. 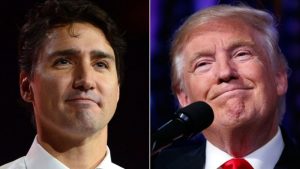 Against that backdrop, Canadian Prime Minister Justin Trudeau made his first official visit to Washington on February 13. The self-proclaimed ‘feminist’ prime minister left behind in Canada whatever opinion he might have about Donald Trump’s views and policies on global warming, the rights of immigrants and refugees, women’s rights and other matters. Trudeau’s sole concern was to maintain and possibly enhance the lucrative trade between the U.S. and Canada in all manner of manufactured products and natural resource commodities. The Canada-U.S. trading relationship is the second largest in the world, topped only by U.S.-China trade (Wikipedia).

By that measure, Trudeau’s visit was an unqualified success. His message on behalf of corporate Canada of unceasing fealty to the U.S. empire, whoever may be leading it, was understood and well received. A Globe and Mail columnist called Trudeau’s performance “appeasement“.

Canada’s corporate leaders have further reason to celebrate of late. On February 15, the European Parliament approved the controversial Comprehensive Economic and Trade Agreement (CETA) (Wikipedia). Canada and the EU have been negotiating the agreement for the past several years. It is the latest trade and investment agreement marking the era of globalized capitalism that opened in the early 1980s. Prior to the European Parliament vote, the deal was approved by each of the 28 member countries of the EU. See news further below on the EU approval of CETA.

One spoiler in the rash of good news has been the decision of an Ontario court on February 14 that the Canadian government owes more than a billion dollars of compensation to the children and families who were victims of the ‘Sixties Scoop’ policy of the 1960s to 1980s. News reports are here and here. The ‘Sixties Scoop’ was a policy of forcibly moving First Nations children from their homes and placing them in non-Aboriginal foster care. An estimated 16,000 children were child-napped by the policy. It was the latest in a string of Canadian government policies dating back more than a century by which Canada conducted an assimilationist policy of cultural genocide against the Indigenous peoples residing in the territory that became Canada.

Likelihood of U.S. border tax fades in face of mounting opposition, by Robert Fife, The Globe and Mail, Feb. 14, 2017

How Donald Trump can sidestep Congress on NAFTA, by Adrian Morrow, The Globe and Mail, Feb 14, 2017

The deal will cut 99 per cent of tariffs between the two sides but opponents say it gives corporations too much power over domestic regulation. Several hundred people protested in Strasbourg outside parliament.

CETA is a gold-standard trade deal – for North America’s corporations, commentary by Stuart Trew and  Scott Sinclair of the Canadian Centre for Policy Alternatives, published in The Guardian, Feb 13, 2017