126 member-states of the UN voted for the document, 53 countries, including member-nations of the European Union, abstained from voting

UNITED NATIONS–On November 19, the Third Committee of the UN General Assembly approved a resolution on measures against the glorification of Nazism, neo-Nazism and other practices that facilitate the escalation of modern forms of racism, racial discrimination, xenophobia and intolerance related to them. 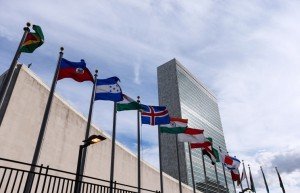 A total of 126 member-states of the UN voted in favour of Resolution A/C.3/70/L.59/Rev.1 (eight pages, full text appended below). Four countries — Canada, Palau, the U.S. and Ukraine — voted against it. Another 53 countries, including all the member-nations of the European Union, cast abstention ballots. Also abstaining were Australia, Japan and New Zealand. The full voting record is appended below, weblink here.

Last year, 115 countries voted in favor of a similar resolution while three countries — Canada, Ukraine and the U.S. — voted against and Europe abstained.

This year, the document  was submitted by 41 countries, including Bolivia, Brazil, China, Cuba, India, Russia, Venezuela and 17 African countries, including Nigeria. It condemns unconditionally any denial of the Holocaust and expresses concern over any forms of glorification of the Nazi movement, former members of the Waffen SS organization, including the installation of memorials to them, and the “unending attempts to desecrate or destroy the monuments to those who fought with Nazism during World War II”.

The Third Committee of the United Nations is assigned to examine humanitarian, social and cultural issues and develop policy for the world body. The committee’s report on its session of November 19, 2015 includes a section reporting on the debate over the anti-Nazism resolution. Enclosed below is the text of that section of the report.

‘No’ to concerted action to eliminate racism, say the U.S. and other big powers

Another resolution discussed at the November 19 Third Committee meeting was Resolution A/C.3/70/L.61, titled ‘ A global call for concrete action for the total elimination of racism, racial discrimination, xenophobia and related intolerance and the comprehensive implementation of and follow-up to the Durban Declaration and Programme of Action’.

[Corrected section:] The six page resolution seeks to commit the UN to apply the sweeping Durban Declaration and Programme of Action (62 pages) issuing from the World Conference against Racism, Racial Discrimination, Xenophobia and Related Intolerance, Aug 31-Sept 8, 2001 in Durban, South Africa (Wikipedia item here). Voting in favour of the resolution on November 19 were 128 countries. Eleven countries voted ‘no’, including the U.S., Canada, Germany, France, the UK, Israel and Australia. Forty four countries abstained, including the European countries that did not already vote ‘no’ and Japan.

The big powers of the world have opposed the Durban Declaration from the outset, notably because the conference considering it probed the issues of compensation for the African slave trade and Israel’s treatment of the Palestinian people, the latter considered to be racist by the conference majority. [End corrected section.] The U.S. and Israel walked out of the 2001 conference in Durban and boycotted the two follow-up conferences held in 2009 and 2011. Canada joined the follow-up boycotts. All three Durban conferences were under the auspices of the United Nations General Assembly.

Report of the Third Committee of the United Nations on its meeting of Nov 19, 2015; excerpt concerning resolution combating racism and glorification of Nazism:

… The Committee then took up a draft resolution titled “Combating glorification of Nazism, neo-Nazism and other practices that contribute to fuelling contemporary forms of racism, racial discrimination, xenophobia and related intolerance” (document A/C.3/70/L.59/Rev.1).

That draft text would have the General Assembly express deep concern about the glorification of the Nazi movement and condemn without reservation any denial of the Holocaust.  Further to the text, the world body would underline that the roots of extremism were multifaceted and must be addressed through adequate measures such as education, awareness-raising and the promotion of dialogue.  The resolution would also have the Assembly express deep concern about the increased number of seats occupied by representatives of extremist parties of a racist or xenophobic character in a number of national and local parliaments and emphasize in that regard the need for all democratic political parties to base their programmes and activities on respect for human rights and freedoms, democracy, the rule of law and good governance.

Speaking before the vote, the delegate of the Russian Federation said the Committee was taking up the text on the eve of the seventy-fifth anniversary of the establishment of the Nuremberg tribunal and on the seventieth anniversary of the defeat of Nazism and the creation of the United Nations.  Modern forms of racism were a cause of grave concern.  In some European countries, including those that had been occupied, a true war was being waged against the memory of those who had fought against Nazism.  It was not a matter of political correctness, but of attempting to falsify history.  The text, he said, would make a significant contribution to the fight against racism.

In an explanation of vote prior to the vote, the representative of Belarus called Nazism a totalitarian ideology with terroristic methods whose crimes had been rightly condemned at Nuremberg.  Today, extremist movements and groups had continued to promote the heinous crimes of Nazism.  It was a matter of concern that, at times, some Governments had permitted such ideas by citing freedom of speech.  Such an evil had to be combated.

In a general statement prior to the vote, the Russian Federation asked for clarification on which delegation had requested a recorded vote.

The Chair said it had been requested by the United States.

The representative of Syria said the draft addressed a very important issue that was related to intolerance and racism.  Combating Nazism was an important step in the fight against terrorism.  As such, he said his delegation would vote in favour.

The delegate of the United States said her country condemned Nazism and all forms of racism.  It was an active partner in promoting remembrance of the Holocaust.  However, because of the draft’s overall narrow scope and politicized nature and because it called for limits on freedom of expression, the text was unacceptable to her delegation.  She expressed concern that the Russian Federation had used the resolution to carry out a political attack against its neighbours.  The United States would vote no and called upon others to do so.

The Committee approved the text by a vote of 126 in favour, to 4 against (Canada, Palau, Ukraine, United States) with 53 abstentions.  Explaining his vote, the delegate from Ukraine said his country had been among those that had suffered the most during the Second World War, but the text had nothing in common with the fight against Nazism, neo-Nazism and other forms of intolerance.  For years the Russian Federation had warned of a resurgence of fascism in Europe, but recently a conservative forum had taken place in one of its cities that brought together neo-Nazis and extreme nationalists, among others.  The text had been a cynical attempt by the Russian Federation to present itself as a champion of the struggle against neo-Nazism.

The representative of Luxembourg, on behalf of the European Union, said efforts by the main sponsor to hold informal consultations in an open, inclusive and transparent manner were appreciated.  However, a number of important concerns still remained and several essential proposals put forward by the Union had not been included in the text, which emphasized issues far from being related to combating racism, racial discrimination, xenophobia and related intolerance and did not address all contemporary forms of racism in a comprehensive way.  Focusing the fight against racism around the teaching of history, monuments, memorials or erroneous references to national liberation movements fell outside the scope of the human rights agenda and aimed to monopolize the fight against Nazism with a one-sided view of history.  Language in the text also addressed too restrictively the fundamental right to freedom of expression and peaceful assembly.  The European Union had abstained from the vote.

The representative of Switzerland, also on behalf of Iceland, Liechtenstein and Norway, said that some very important elements were contained in the text, but it was regretted that changes that would have broadened its scope had not sufficiently been taken on board.  The timeliness of such a resolution was questioned, as many forms of racial discrimination and xenophobia did not have roots in Nazi ideology.  Paragraphs de facto restricting the rights to freedom of peaceful assembly, association, opinion and expression were cause for concern.  For those reasons, the four countries had abstained.

Making a general statement, the representative of Armenia, on behalf of the member States of the Collective Security Treaty Organization, said the text had the full support of his State.  Combating the ideology of hatred, no matter its name, was a common issue that required common efforts on the part of the global community.  Targeted attempts to rewrite or slant history were strongly condemned.

The representative of China, which voted in favour, thanked the Russian Federation for its “enormous efforts” with regard to the text.  The Second World War had been a victory of good over evil and light over dark.  To forget history would be an act of betrayal and the international community had to remain highly vigilant.

The delegate of Cyprus, expressing deep alarm at manifestations of neo-Nazism, said the text could have been further improved upon.  The delegate of Greece underlined reservations about certain elements that fell outside the human rights agenda and focused on political issues targeting countries. [End text excerpt]