The following article was published on May 15, 2017 by the news outlet of Canada’s state news broadcaster, CBC .ca.


The Syrian branch of al-Qaeda, currently calling itself Hay’at Tahrir al-Sham (HTS), has succeeded in getting itself off Canada’s list of designated terrorist entities following its latest identity shift.

That complicates the task of prosecuting Canadians who travel to join the group, send it money or propagandize on its behalf. It also illustrates the pitfalls of Canada following the lead of the U.S. in designating terror groups.

HTS escapes being listed at a time when it is absorbing other jihadi groups and attracting more recruits, even as the Islamic State retreats on multiple fronts.

HTS has a history of renaming itself and altering its structure to confuse outsiders, and the Syrian population, about its true affiliations. But until now, few observers have accepted its claims to have distanced itself from its parent organization.

Hay’at Tahrir al-Sham (the Organization for Conquest in the Levant) began life as an expeditionary force called Jabhat al-Nusra (the Support Front), dispatched into Syria in 2011 by the leader of al-Qaeda in Iraq, Abu Bakr al-Baghdadi, now “caliph” of the Islamic State (ISIS). Jabhat al-Nusra was led by Syrian jihadist Abu Mohammad al-Jawlani. The United States put the group on its terrorist list in 2012, as the Syrian branch of al-Qaeda, and Canada followed suit.

Al-Baghdadi soon crossed into Syria himself, renouncing his allegiance to al-Qaeda and founding ISIS in April 2013. Al-Jawlani’s group remained loyal to the mother organization founded by bin Laden, and Jabhat al-Nusra and ISIS have been at each other’s throats ever since.

Meanwhile, the U.S.-led coalition focused its bombing on Islamic State, not al-Nusra.

While ISIS made headlines and enemies across the world, al-Nusra flourished. It has carried out numerous suicide bombings, forced religious conversions, destroyed ancient shrines and enacted brutal punishments, including the stoning of women.

A history of shape-shifting

In early 2015, al-Qaeda’s international leader Ayman al-Zawahiri, thought to be hiding in Pakistan, set al-Nusra free of its formal subordination to al-Qaeda. “The brotherhood of Islam that exists among us is stronger than any passing or changing organizational ties,” he said in a taped statement, instructing the group to integrate itself into the wider Syrian revolt.

Al-Nusra changed its name to Jabhat Fateh al-Sham (Front for the Conquest of the Levant), and continued to gobble up other Syrian jihadi groups, often by force. But the West wasn’t buying it. The U.S. and Canada simply added the new name as another alias of al-Nusra on their terrorist listings.

Both countries are normally careful to capture all the aliases of terrorist groups, including minor variations in spelling and punctuation. (Islamic State has 46 permutations of its name listed by Public Safety Canada; al-Nusra has six). But then in January of this year, the group shifted again, nominally dissolving itself and joining with four other jihadi groups. It altered its name, changing the word “Jabhat” (Front) to “Hay’at” (Organization), and “Fateh” (Conquest) to “Tahrir” (Liberation).

The military commander of the group continues to be al-Jawlani, whom the U.S. has branded a Specially Designated Global Terrorist. On Wednesday, the U.S. government posted a $10-million reward for him. The reward notice states that al-Nusra is “at the core of HTS,” which is led by a triumvirate that also includes Egyptian Abu Khayr al-Masri, the number two of the global al-Qaeda organization.

The U.S. State Department’s Nicole Thompson told CBC News on Monday: “We’re still looking at the extent of the merger and how Hay’at Tahrir al-Sham really functions, but we believe these actions are an al-Qaeda play to bring as much of the Syrian opposition under its operational control as possible, thereby making groups that merge with HTS part of al-Qaeda’s Syria network.”

“In that sense, it is not unlike the formation of the Mujahideen Shura Council in Iraq in 2006, which eventually brought the better part of the Iraqi Sunni resistance under al-Qaeda’s control and morphed into the Islamic State of Iraq that same year.”

And yet HTS has not been designated in the U.S. as a terrorist group. Canada, which usually follows the U.S. listing closely, has also not listed the group. “We are still studying the issue carefully,” says Thompson, “but at this point we would caution any group from joining HTS, as they risk becoming part of an organization we are determined to destroy because of the threat al-Qaeda poses to the United States, to the region, and to other Muslims.

“Nothing we have seen so far changes our concern about the group’s growing capacity for external operations.”

But while the State Department is under no illusions as to the true nature of HTS, and may yet designate it in the future, the fact that it is not designated now complicates the task of prosecutors in dealing with HTS members, financiers and facilitators.

But University of Ottawa law professor Carissima Mathen says the lack of designation creates a higher barrier to prosecution. “The Criminal Code provides two ways for something to be defined as a terrorist group. One of them is if it’s actually a group that has as its purpose terrorist activities, and the second is if the Governor-in-Council puts it on a list, which is done on a less stringent basis.

Mathen says that “might not be a deal-breaker for me as a prosecutor”, but “depending on what other priorities and pressures I was facing, it would definitely count in terms of how I could fit that into my existing caseload.”

She says it might lead a prosecutor to decide some cases are not worth the extra effort. Instead of prosecuting all money transfers to HTS, for example, prosecutors might only focus on larger amounts. “I would think as a government if you had this power, you’d expect them to use it, to list this entity.”

The reasons for the reluctance to list the new al-Qaeda formation may have to do with one of its new members, the Nour ed-Dine Zenki Brigade, a jihadi group from the Aleppo governorate. The Zenki Brigade was an early and prominent recipient of U.S. aid, weapons and training.

Zenki was cut off by the State Department only after Amnesty International implicated them in killings of Orthodox Christian priests and members posted a video of themselves beheading a young boy.

For the U.S. to designate HTS now would mean acknowledging that it supplied sophisticated weapons including TOW anti-tank missiles to “terrorists,” and draw attention to the fact that the U.S. continues to arm Islamist militias in Syria.

Canada’s longstanding reliance on U.S. listings exposes it to the increasingly politicized nature of those listings, which are influenced by the U.S. strategy of backing groups fighting the Syrian government and its Russian allies.

It also means that Canada currently does not list any active branch of al-Qaeda in Syria, the world’s most important jihadi battleground.

“It wouldn’t surprise me at all that because of the shifting nature of these alliances and relationships that Western countries’ hands are not entirely clean in terms of their own dealings with these groups at some point in the past,” says Mathen. 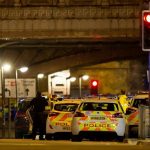 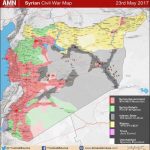 Map of military conflict in Syria as of May 23, 2017Multipolarity