Canada and the Ukraine powder keg: A conversation with John Helmer and Roger Annis 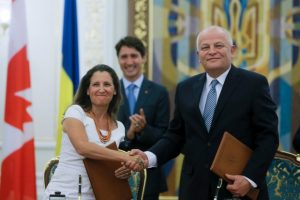 The following, one-hour interview was conducted with John Helmer and Roger Annis by Michael Welch of Global Research News Hour on April 1, 2017. The program is produced weekly at the studios of CKUW (University of Winnipeg) and broadcast on other radio networks. John Helmer was in Moscow, Roger Annis was in the CKUW studio. Go to the weblink above to link to the interview.

The month of March proved to be a busy and hectic one for Canada’s Foreign Affairs Minister Chrystia Freeland.

Dogged by independent media reports about her maternal grandfather being a Nazi collaborator during World War II (which proved to be correct), Freeland  addressed the issue during a March 6 press conference in Ottawa. She depicted the (true) revelations as being part of a Russian attempt to destabilize the political system in Canada. The press conference itself was intended as an announcement of the extension until the end of 2019 of Canada’s “military training mission” in support of Ukraine.

On March 31, Minister Freeland attended her first NATO foreign ministerial meeting in Brussels, Belgium, and according to her twitter feed, announced, “At NATO, reiterated that Russia’s illegal annexation of Crimea & violence in Donbass will not be tolerated. CAD stands by Ukraine.”

Meanwhile, on March 29, a Polish consulate in Western-Ukraine came under attack by a suspected anti-tank missile causing structural damage. This was the latest of a string of attacks targeting Polish monuments in the region, indicative of a rise in extremism among Ukraine ultra-nationalists against Polish heroes and icons from the Second World War. As the New Cold War website points out, this incident was presented by Western media as a “Russia did it” story, if it got any press coverage at all!

There is virtually no sustained media criticism or examination of Canadian policy in Ukraine. Hints of discord between Minister Freeland and Canada’s Foreign Affairs establishment go unexplored.

With these developments in the background, the Global Research News Hour devotes an hour examining Ukraine, now more than three years after the overthrow of the government of President Victor Yanukovych. We examine how Canadian foreign policy is engaging the volatile country. Our guests are John Helmer and Roger Annis.

John Helmer has served as a foreign correspondent in Russia since 1989, and is the only western journalist to direct his own bureau independent of single national or commercial ties. Helmer has also been a professor of political science, of sociology, and of journalism, and an advisor to government heads in Greece, the United States, and Asia. Helmer is among the most widely read Russian specialists in the business world for his news-breaking stories on Russian base and precious metals, diamonds, mining, shipping, insurance, food trade, and business policy. An archive of his articles can be found at his blog Dances With Bears.

Roger Annis is a socialist and trade union activist. Annis writes regularly on topics of social justice and peace. He has written extensively about Canadian involvement in Haiti and, more recently, in Ukraine. He is a founding editor of the website The New Cold War: Ukraine and beyond, which was launched in October 2014.