The following article appearing in Canadian dailies today reports from the NATO-country military training base in western Ukraine. The article appears in Postmedia print newspaper outlets across Canada, including in The National Post, Vancouver Sun, Ottawa Citizen and Montreal Gazette, among other big-city dailies.

No argument, it seems, is off limits or too oddball for Postmedia when it comes to arguing for more militarism and intervention. Witness its longstanding argument that Ukraine is a victim of “Russian aggression” and therefore requires NATO military intervention. Or the commentary authored by Matthew Fisher on June 12  arguing that in its shopping around for a new generation of fighter aircraft to replace its fleet of aging, Boeing ‘F18’s, Canada should select the ‘F35’ aircraft manufactured by Lockheed Martin instead of F18 ‘Super Hornets’ manufactured by Boeing.

Fisher wrote that if Canada does not select the F35, this would amount to “surrendering sovereignty of [Canada’s] Arctic air space to the United States Air Force in about 10 years”. That’s because, he said, F35s are “invisible” to radar and thus are the only Canadian aircraft with which the United States would be prepared to pair up in patrolling of northern Arctic regions.

“Critics of the F-35 will laugh and say this is hyperbole and melodrama. It is not. Keeping the U.S. safe is the top priority of every U.S. president. If Canada cannot or will not protect its Atlantic, Pacific and northern approaches, its NORAD treaty with the U.S. permits Washington to do so.”

Postmedia is a newspaper oligopoly in Canada which publishes many of Canada’s daily newspapers, including those of the Sun tabloid chain it owns. 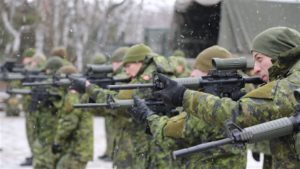 YAVORIV, Ukraine — Seven thousand kilometres from Quebec but only 10 hours by road from the bloody battlefields of eastern Ukraine, about 200 soldiers mostly from Canada’s storied Royal 22nd Regiment, the Vandoos, are helping to prepare Ukrainian infantry, medics and combat engineers to defend their country against Russian-backed separatists [sic].

More than anything, the Canadian training mission, which began last summer near the Slovak and Polish borders, tries to instill NATO fighting principles and western ethics.

“They are very highly motivated,” said Maj. Bruno Turmel, deputy commander of the Vandoo company which has been here since January. “What they are learning is to be inter-operable with us and the Americans and all the other partners that are here and to build their war fighting capacity and capability.

Turmel, who served twice as a military trainer to Afghan security forces, said he had learned “a lot from the Ukrainian officers and soldiers. They are patriotic and many of them have combat experience.”

The Vandoos replaced mentors from the Ontario-based Royal Canadian Regiment, who started the mission last August, and will be succeeded next month by the western-based Princess Patricia’s Canadian Light Infantry.

The training mission was set up by the Harper government in reply to a request for help from Kyiv, which does not have enough resources to defend itself from its much larger and wealthier neighbour, Russia.

Prime Minister Justin Trudeau, who will be in Warsaw this weekend for the NATO leaders’ summit, will discuss whether to continue the training program when he meets Ukrainian leaders in Kyiv afterward.

The Canadians have seven different “lines of effort” taking place simultaneously at several locations around the country. But most of the troops work in a sprawling Ukrainian army base outside Yavoriv, where the training ground is nestled in green hills reminiscent of Quebec’s Eastern Townships.

The longest course offered by the Canadians lasts 55 days. It teaches basic and small unit fighting skills to infantry. There are also leadership courses for senior non-commissioned officers, courses for military police and anti-mining training.

One of the key areas is teaching Ukrainian medics battlefield emergency treatment practises. Such skills are urgently needed as the brutal war in the east grinds on.

Sgt. Yann Gauthier, who did three combat tours as a medic in Afghanistan, was amazed at how quickly some of his students applied the lessons he taught. “Within a week after graduation, they can go directly to war,” he said.

About 70 per cent of the Canadian trainers — including three of the five medics teaching combat first aid and more specialized course  — served in Afghanistan. That experience “helps me a lot here,” Gauthier said. “It gives me credibility with the Ukrainians. Whether it is on the battlefield in Afghanistan or Ukraine, the body needs the same thing if it is bleeding to death. The techniques are almost the same so we can apply what we learned in Afghanistan.”

Instructor/soldier Arthur Woichenko describes the course offered by the Canadians as “priceless.”

“You can tell when a person already has some experience on the battlefield and has experienced that with his own blood. Looking him in the eye, you feel it and understand why such methodologies and so important,” he said.

“I have participated in other courses before and we only got basic knowledge. Here, we get practical tasks. I have crossed out what I knew beforehand and absorbed all the information like a sponge because it was so important.”

Graduates are also given a combat first aid kid worth $350.

One of the goals of the 13 NATO nations training Ukrainian forces is to wean them from their top-down Soviet-style leadership and delegate more decisions to junior officers and sergeants.

“The culture is definitely different than what we are used to working with. The decision-making is more highly concentrated in the higher echelons,” said Maj. Jean-François Lamarche, a combat veteran in Kandahar who mostly works in the field with Ukrainian platoons during the 55-day courses.

Although the program had been “quite successful … of course there has been some resistance. It is a new way of thinking for them. But we are not teaching them this as ‘100 per cent the way to go.’ What we do is present them with a way to do things.”

Lt.  Alexei Chebutav, who fought Russian-backed forces around the rebel-held city of Donetsk, said there was much to recommend the Canadian approach. “In the Canadian Armed Forces, the accent is on non-commissioned officers,” he said. “In the Ukrainian army a lot of instructors still act according to the rules of the Soviet time.”

“I always tell my soldiers that the experience we get with you can help to save our lives,” Chebutav told his mentor, Lamarche, as their course wound down Monday. “You leave your souls here and our guys appreciate it very much.” 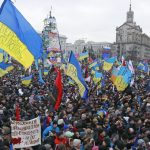 The Rosa Luxembourg Foundation and its alliance with Ukrainian leftists supporting a pro-NATO course against RussiaEurope - West, Ukraine