Canada to Russia: interference is okay if it destabilizes you but not the other way around 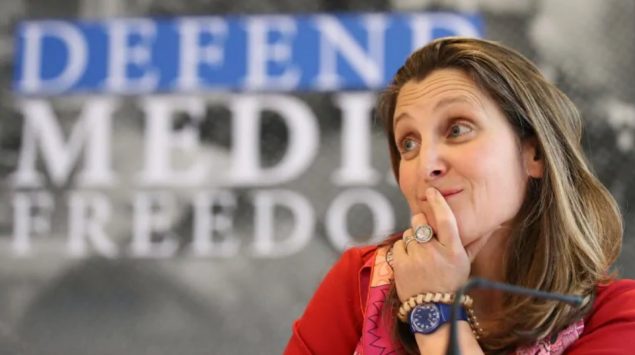 During the first two years of Trump’s presidency, the long British infiltration of America has finally begun to fall apart with the collapse of the Mueller investigation and the exposure of the British-run deep state of which Mueller was part.

During Trump’s two first years as President, the long British infiltration of America has finally begun to fall apart with the collapse of the Mueller investigation and the exposure of the British-run deep state that Mueller was a part of.

In the midst of one of the most de-stabilizing scandals to rock Canada in years, Foreign Affairs Minister Chrystia Freeland announced on April 5 that the threat of “Foreign interference” going into the October 2019 elections was at an all-time high.

Sitting beside her UK counterpart at a G7 meeting in France, Freeland stated: “Interference is very likely and we think there have already been efforts by malign foreign actors to disrupt our democracy”. Her warning was echoed by an embattled puppet Prime Minister in Ottawa who stated it is “very clearly that countries like Russia are behind a lot of the divisive campaigns … that have turned our politics even more divisive and more anger-filled than they have been in the past.”

The Measures to Defend the British Deep State

In order to counteract this “foreign threat”, several Canadian mechanisms have been announced to “keep democracy safe” in alignment with the G7, Five Eyes and NATO. These mechanisms are:

The creation of an “Incident Public Protection Panel” run by five Privy Council bureaucrats under the Clerk of the Privy Council which will exist outside of the authority of the Chief Electoral Officer of Canada, whose job is to maintain the integrity of elections. In defense of this mysterious group, Canada’s Democratic Institutions Minister Karina Gould stated that “it won’t be one person who will decide what Canadians will be allowed to know” (apparently having five people decide is more democratic). The new Clerk of the Privy Council is Ian Stugart, who served as former deputy minister to Chrystia Freeland until just a few weeks ago.

A Security and Intelligence Election Threats Task Force which will incorporate all of Canada’s intelligence agencies such as the Canadian Security Intelligence Service, the RCMP, the Communications Security Establishment (CSE) and Freeland’s Global Affairs Canada. All of these agencies are Privy Council organizations.

The Rapid Response Mechanism of the G7 created in June 2018 and headquartered in Ottawa Canada in Freeland’s Global Affairs Office and Privy Council Office.

While Russia is being set up as the scapegoat of the collapsing western liberal establishment, this most recent red alarm by Freeland and Canada’s response to the “danger” is useful for two reasons:

First and foremost, Freeland’s shameless warnings over “foreign interference” have become so loud that an irony has become unavoidable. She has after all been caught red handed behind the destabilization of both Ukraine and Venezuela. Secondly, by reviewing the mechanisms being created by Canada to counter-act this “threat”, a clear insight is provided into the inner workings of the actual foreign influences which infiltrated Canada many decades ago.