Canadian arms manufacturers have signed the largest arms sales agreement in their history–with the autocratic regime in Saudi Arabia. The deal required, and has received, the assent of the Canadian government of Prime Minister Stephen Harper. 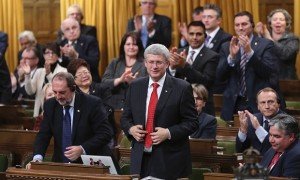 The arms deal with Saudi Arabia coincides with a petition campaign of the Hamilton Coalition To Stop The War (Hamilton, Ontario) opposed to Canadian government participation in bombing Syria and Iraq. The petition has received the signatures of more than 700 people, including, most recently, that of Green Party leader Elizabeth May. She is the one Green Party member of the Canadian Parliament.

The Green Party, the New Democratic Party and the Liberal Party all voted against the Harper government’s war resolution on October 7, 2014 to join the U.S.-led campaign to bomb targets in Iraq. The government motion passed. The government said the bombing was targeted against an enemy they and the U.S. call ‘ISIS’.

The same collection of opposition parties voted on March 15, 2015 to oppose a government motion to join the U.S. in extending the bombing to Syria. That motion also passed.

NDP leader Tom Mulcair has promised to withdraw at once from the U.S.-led bombing coalition against Syria and Iraq should the NDP form a majority government in the Canadian election to take place on October 19.

Incongruously, the parties in Canada’s Parliament are unanimous in backing the Harper government’s support to the civil war of the Ukrainian government in the east of that country, and the NATO military alliance’s support of that war. The parties also support Canadian government participation in training the Ukrainian army and its allied paramilitary battalions (most of which are now integrated into Ukraine’s National Guard), and they support related economic sanctions against Russia and economic and travel sanctions against targeted leaders of the Russian government.

The folly of Canada’s support to the right-wing, civil war government in Kyiv is evident. But more explanation is needed to convince members of the Canadian Parliament of this fact. Canada’s antiwar groups also need convincing that Canada’s shameful support to war in Ukraine is part of the same policy that sees Canada supporting wars in the Middle East. Friends of the peoples of Ukraine and Russia should redouble our efforts to convince progressive and antiwar Canadians of these facts.

Stephen Harper is refusing to apologize for signing a contract to sell $15-billion of armoured fighting vehicles to Saudi Arabia, a country attracting increased global attention for its abysmal human-rights record…

By Cesar Jaramillo, published on OpenCanada.org, a project of the Canadian International Council, Sept 21, 2015

The largest arms exports contract in Canadian history will see Canadian-made military equipment shipped to one of the worst human rights violators in the world — Saudi Arabia. This will happen despite an existing export control regime specifically intended to prevent Canadian goods from fuelling human rights violations abroad.

The deal was brokered by the Canadian Commercial Corporation (CCC) — a taxpayer-financed Crown corporation — for an undisclosed number of Light Armoured Vehicles to be manufactured by General Dynamics Land Systems (GDLS), based in London, Ontario.

While many details of the deal remain shrouded in secrecy, below are 10 indisputable facts.

Fact 1: The deal is, by far, the largest military exports contract in Canadian history.

The contract, valued at $14.8-billion, was awarded during the 2013-2014 fiscal year. It dwarfs any other military exports contracts brokered by the CCC — ever.

With the total value of all military export contracts for 2013-2014 at $15.5-billion, the Saudi deal accounted for more than 95 percent of military exports for the fiscal year.

Fact 2: Canada’s trade policies state that Canada “closely controls” military exports to governments with “a persistent record of serious violations of the human rights of their citizens.”

According to Canada’s export control policies, “once an application to export goods or technology has been received, wide-ranging consultations are held among human rights, international security and defence-industry experts” at Foreign Affairs, Trade and Development Canada (DFATD), the Department of National Defence, and, “as necessary, other government departments and agencies.”

Before export permits for military equipment are issued, the human rights safeguards built into Canada’s export control policies call for a case-by-case assessment, after which the Canadian government must be satisfied that “there is no reasonable risk that the goods might be used against the civilian population.”

The position of the Canadian government — as stated on the publicly accessible DFATD website — is that Canada has “some of the strongest export controls in the world.”

Fact 3: Saudi Arabia is one of the worst human rights violators in the world.

By any modern standard, Saudi Arabia is a human rights pariah. According to Washington-based Freedom House, the country is among the “worst of the worst” human rights offenders in the world. Year after year, authoritative organizations such as Amnesty International and Human Rights Watch condemn the consistent, systematic repression of the Saudi civilian population by the governing regime.

Beheadings are routine; an October 2014 Newsweek feature story was entitled “When It Comes To Beheadings, ISIS Has Nothing over Saudi Arabia.” Posting online comments critical of the regime can result in the author being publicly flogged. Women cannot drive. Freedom of speech is severely censored. Freedom of association, freedom of the press, and academic freedom are restricted. Hundreds of thousands of websites have been blocked. The state imposes harsh penalties, including beheadings, for crimes such as witchcraft, apostasy, sorcery, and fornication.

If a country with Saudi Arabia’s dire human rights record is deemed eligible to receive Canadian-made military goods, it is hard to comprehend what sort of record a country must have to actually trigger the pertinent human rights safeguards.

In March 2011, Saudi Arabia sent armoured vehicles to help quell peaceful civilian protests in neighbouring Bahrain. One of several media outlets that made such claims, Britain’s Telegraph reported that Saudi troops were in Bahrain to “crush” the protests.

The Canadian government has neither confirmed nor denied that the armoured vehicles used by Saudi forces in Bahrain were made in Canada. In May 2015, The Globe and Mail reported, “Asked if it believes the Saudis used made-in-Canada LAVs when they went into Bahrain, the Canadian government doesn’t deny this happened.”

Fact 5: The necessary export permits had not been issued when the deal with Saudi Arabia was officially announced.

Project Ploughshares has established that at the time that the Saudi deal was announced in February 2014, the required export permits had not been issued. This is especially significant, as a key element of the export permits is a human rights assessment to determine that the deal in question does not contravene Canada’s export control policies.

We need to ask: Was the announcement of the sale made on the assumption that the export permits would eventually come through? What was this assumption based on? Would any reasonable observer not find this assumption highly risky, given what is known about the recipient nation?

Fact 6: The deal was announced without a single reference to the human rights situation in Saudi Arabia.

When Minister for International Trade Ed Fast made the official announcement that General Dynamics Land Systems had won “the largest advanced manufacturing export win in Canada’s history,” it was framed as an economic victory for Canada.

References to job creation and a “cross-Canada supply chain” constituted the primary talking points. The announcement said nothing about the dire human rights situation in Saudi Arabia or the necessary export permits.

Fact 7: Information on how Ottawa justified the deal has not been made available to the Canadian public.

No human rights reports for 2014, the year in which the deal was announced, or the 2013-2014 fiscal year, when the CCC awarded the contract to GDLS, were produced by Foreign Affairs, Trade and Development Canada. Further, DFATD will not divulge details of the export permit application process, citing commercial confidentiality.

Fact 8: More than a passive intermediary, the CCC is an active promoter of military exports.

The Canadian government has made “economic diplomacy” in the service of private industry a centerpiece of Canada’s foreign policy. As The Globe and Mail reported in May 2015, Martin Zablocki, the president and chief executive of the Canadian Commercial Corporation, sees the Middle East as a “strategic region” for sales of Canadian arms sales. Further, The Globe and Mail reported that the CCC has actively sought new markets for military goods as “part of a push by the federal government to beef up Canada’s role as an arms dealer.”

Fact 9: Other developments, such as the expansion of the Automatic Firearms Country Control List, point to the erosion of military export control standards in Canada.

The Automatic Firearms Country Control List (AFCCL), which was designed to restrict the foreign market for Canadian-sourced automatic firearms, is becoming less and less restrictive. As only countries on the list can receive Canadian firearms, countries have been added to the list as potential markets and lucrative deals have emerged for Canadian-made weapons — and as old, trustworthy clients have cut back on their purchases.

Fact 10: Canada’s minority position as a non-signatory to the Arms Trade Treaty denies it a voice in a critical international process to better regulate the arms trade.

The Arms Trade Treaty (ATT), which came into force in December 2014, is widely seen as a major diplomatic achievement, as it seeks to regulate the global arms trade and prevent military exports from fueling human rights violations and armed conflict. A key feature of the treaty is the expectation that arms deals be conducted with the utmost transparency, so that the risk of human rights violations by the end users can be easily assessed.

The historic First Conference of States Parties to the Arms Trade Treaty was held on August 24-27 in Mexico. Crucial decisions were made on the treaty’s rules of procedure; financing mechanisms that will ensure its sustainability; decision-making rules, such as voting thresholds for procedural and substantive matters; the location, makeup, and role of the ATT secretariat; and the rights and responsibilities of states, industry, and civil society during subsequent meetings of states parties.

What say did Canada have on these consequential matters? None. Canada is the only country in North America, the only member of the G7 group of industrialized nations, and the only one of the 28 members of the North Atlantic Treaty Organization that has not signed the Arms Trade Treaty. Other non-signatories include South Sudan, North Korea, Somalia, Pakistan, Syria, and — perhaps not surprisingly — Saudi Arabia.

Cesar Jaramillo of Project Ploughshares chaired a public forum on ‘Canada and the global arms trade‘ on September 21 in Waterloo, Ontario 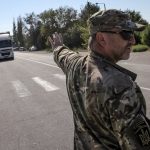 The ‘hunger games’ of Poroshenko: Why the Ukrainian authorities have blockaded the roads to CrimeaBackground, Crimea, Ukraine 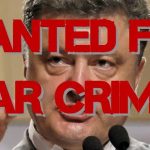