‘The normal conduct in diplomacy is if a government says it intends to adhere to a treaty, that it conducts itself in accordance with those provisions.’

This means Canada’s biggest military export contract, to supply weaponized armoured vehicles to a country regularly ranked by Freedom House as among the “worst of the worst” on human rights, will not be subject to what experts say are stricter export controls in the Arms Trade Treaty.

This matters in the Saudi deal because Ottawa must authorize exports of combat vehicles to Riyadh, and critics say it’s easier to do so under Canada’s current export control regime – where the government has the authority to override its own guidelines on shipping weapons to countries with poor human-rights records.

Paul Meyer, a former Canadian diplomat with 35 years’ experience in the foreign service, said this doesn’t make sense. He said it’s standard practice for countries to begin complying with the rules of treaties once they make it clear they intend to sign them. “The normal conduct in diplomacy is if a government says it intends to adhere to a treaty, that it conducts itself in accordance with those provisions,” Mr. Meyer, now an adjunct professor at Simon Fraser University, said.

Mr. Dion’s mandate letter from Prime Minister Justin Trudeau, made public in November, instructs him to formally commit Canada to the treaty.

But Mr. Dion’s department, Global Affairs, said this will take time. “In order to accede to the treaty … Canada must ensure that it has put in place domestically all legislation or regulations that would be required to ensure that we can fully meet the obligations of the treaty. Officials are currently undertaking internal legislative and policy reviews in order to identify those changes that might be necessary for Canada to accede to the ATT,” Mr. Lasalle said.

Ottawa still has a big role to play in the Saudi deal. Global Affairs must issue export permits to allow the shipment of the combat vehicles to Riyadh once they are ready to be transported abroad. It can only do so after it’s determined there are no risks to human rights in Saudi Arabia, where the government has dispatched armoured vehicles to help crush uprisings in neighbouring Bahrain and quell dissent in its restless Eastern Province. The Saudis also face fresh accusations of indiscriminately killing civilians in Yemen by air strikes.

Even though Global Affairs says it needs more time to sign on to the United Nations-backed accord, the department insists its existing arms-control regime is already robust. “Canada already meets most of the obligations of the Arms Trade Treaty,” Global Affairs spokeswoman Rachna Mishra said.

Critics disagree, saying the language of the Arms Trade Treaty is stronger than the Canadian government’s current rules for restricting exports of weapons. The global treaty came into force 14 months ago, but Canada didn’t sign on at the time; the former Conservative government argued Canada “already has some of the strongest export controls in the world.”

Ken Epps, a policy adviser on the Arms Trade Treaty with Project Ploughshares, an anti-war group that monitors arms exports, said current Canadian export regulations only oblige Ottawa to “closely control” the shipment of military goods to countries with a persistent record of human-right violations. He calls that a “loose arrangement” that gives the government too much leeway to override export controls and overlook findings on the risks to human rights in Saudi Arabia.

Under Article 7 of the Arms Trade Treaty, however, Canada will be obliged to “assess the potential that convention arms … could be used to commit a serious violation of international human-rights law” and other factors – and if there is an “overriding risk of any of the negative consequences,” the country in question “shall not authorize the export.”

Mr. Epps also said the Canadian government is wrong. He notes that even after Canada has acceded to the treaty, it has an ongoing responsibility to monitor events in Saudi Arabia and to suspend export permits or refuse to issue new ones if warranted by the human-rights risks in the Mideast country.

NDP foreign affairs critic Hélène Laverdière said the Liberals are trying to dodge tougher rules on export controls and on transparency by saying the global arms trade treaty will not apply to the Saudi deal. 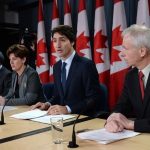 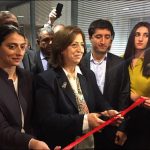