Can America ‘be back’ at the 76th UN General Assembly? 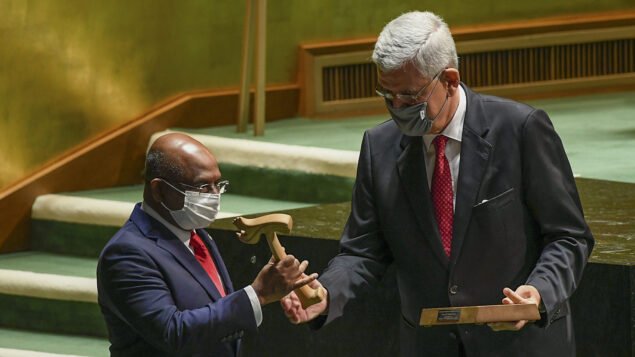 The United Nations, the most inclusive multilateral institution of world governance ever created, where each country has a vote, could not celebrate its 75th anniversary properly last year. It had to do so virtually. Worse, it was also clear that the letter and spirit of its original multilateralism had been deeply compromised.

The United Nations, the most inclusive multilateral institution of world governance ever created, where each country has a vote, could not celebrate its 75th anniversary properly last year. It had to do so virtually. Worse, it was also clear that the letter and spirit of its original multilateralism had been deeply compromised.

The United Nations General Assembly (UNGA) recognized that the pandemic, the ecological emergency, the still great need for development, rising waves of desperate migration and many other world problems were crying out for cooperation and multilateralism. It highlighted the theme “The Future We Want, the UN We Need: Reaffirming our Collective Commitment to Multilateralism.”

However, the U.S. could not care less. Just months before, former U.S. President Donald Trump had ratcheted up Barack Obama’s hostile “pivot to Asia” into a new Cold War towards China in response to its technological development and reaction to the pandemic. At the UNGA, Trump shrilly repeated allegations about the “Wuhan Virus” and the “Kung Flu” with no proof.

Many expected President Joe Biden to be different at the 76th General Assembly and underline that “America is back” in the multilateral game. They hoped this will consign the cantankerous Trump years to the proverbial dustbin of history and inaugurate a new age of multilateral cooperation at the UN.

However, while history may have a dustbin for superficial contingencies, there is none for deeper developments. It is their working that explains why, on the most important matters, whether it is China or foreign policy, economic policy or even pandemic policy, President Biden, though elected to be the anti-Trump president, has found it hard to move out the ruts the Trump administration had made.

The “America is back” show had hardly opened when it crashed on the shoals of the Alaska Summit, the continuing trade, technology and military belligerence against China, the slowing vaccination drive and the slowing recovery threatened by the potential of Federal Reserve interest rate increases. Will Biden’s address to the 76th General Assembly be different? Will it be credible if it does?

It would indeed be very surprising if it did. The pattern of U.S. foreign policy of unilateralism and exceptionalism is even more deeply entrenched in U.S. history from its beginnings than the other aspects of the much-maligned Trump policies that Biden has followed.

While power relations dictated at least some violation of the principle of equal sovereignty at the UN, for instance in the five permanent members of the security council, the U.S. went further. It arrogated to itself vetoes in the World Bank and the International Monetary Fund (IMF). Such U.S. unilateralism and exceptionalism also meant that the U.S. failed to sign or ratify dozens of UN conventions and treaties.

These qualities of the U.S. international posture became all the more visible after the end of the original Cold War when the U.S. began repeatedly violating the sovereignty of many countries and waging wars against them – Iraq, Afghanistan, Libya, Syria, not to mention the U.S.’s many hybrid wars and sanctions. These wars had no legitimate justification and were aimed solely at denying these countries their economic and political sovereignty. Clearly violations of international law, the U.S. produced new doctrines to justify them, whether of “humanitarian intervention,” “democracy promotion” or the “responsibility to protect.”

Not only does President Biden not intend to reorient U.S. foreign policy away from his broad thrust, he has made his own contribution to its rhetoric: the so-called “rules-based international order.” It too is little more than a figleaf to violate actually existing international law in the name of “laws” that the U.S. makes according to its own convenience at any given moment.

Only economic and political realities have ever dictated any reversal of this policy: this was as true of the withdrawal from Vietnam almost half a century ago as it is of that from Afghanistan today. In the latter case, moreover, those realities include the need to focus U.S. resources on its confrontation with China as the new U.S., the UK, and Australia pact directed against China shows.

The threat the U.S. poses to sane multilateral and cooperative governance had led to the creation of the Group of Friends in Defence of the United Nations Charter by 17 countries. They include China, Russia and many socialist countries such as Cuba and Venezuela and Laos and Vietnam. Given the U.S. record, the lack of evidence that Biden either can or will break out of long-established U.S. patterns of international behavior, such initiatives are more urgent than ever.