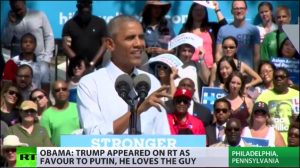 Barack Obama slammed Donald Trump for his appearance on RT last week, accusing the Republican nominee of trying to “curry favor” with the Russian president, whom he compared to Saddam Hussein in one of his harshest comments yet about Vladimir Putin.

“When the interviewer asks him [Trump], ‘why do you support this guy [Putin]?’ He says, ‘He is a strong guy. Look, he’s got an 82 per cent poll rating.’ Well, yes, Saddam Hussein had a 90 per cent poll rating. If you control the media and you’ve taken away everybody’s civil liberties, and you jail dissidents, that’s what happens,” Obama claimed, addressing the crowd at Hillary Clinton campaign event in Philadelphia.

“He loves this guy,” Obama added of Trump’s alleged cozy relationship with Putin. “Now their nominee is out there praising a guy, saying he’s a strong leader, because he invades smaller countries, jails his opponents, controls the press, and drives his economy into a recession.”

It’s not the first time that the name of Vladimir Putin has been brought up in the U.S. presidential campaign, but this time the U.S. president used this “argument” while openly campaigning for Clinton against Trump. The situation has become “really ludicrous and it borders on the ridiculous,” believes Gregory R. Copley, editor of Defense & Foreign Affairs.

“In my 50-some years covering the U.S. government, I have never seen this level of partisanship within the administration where a sitting president actually regards the opposition party as the enemy of the state,” Copley told RT.

The analyst said that the democrats are “blaming the messenger to revert the attention from the message.”

“The message which Donald Trump delivered on RT was unambiguous in his campaign. Just like the fact that WikiLeaks revelation of the hacked emails was very explicit in showing up what the Democratic party itself was doing,” Copley added.

The U.S. establishment is “sacrificing key bilateral relationships in order to win [a] domestic election,” believes Copley. He added that neither Obama nor Clinton are interested in unifying the country, but they are rather “interested in winning and engaging in what modern democracy seems to have become – the tyranny of the marginal majority over the marginal minority.”

“When you think about the number of times that the Clinton campaign has brought up President Putin and the alleged Russian hacking of Hillary Clinton’s service, it makes you wonder just how desperate they are,” Copley noted.

“President Obama has lost literally all prestige in an international community…with the loss of prestige he has become desperate.”