‘The claim of a Russian “invasion” of Crimea is a novel twist on the story of a ‘Russian annexation’ of Crimea being used to justify the U.S. nuclear weapons buildup.’

On March 19, CBC Radio One‘s weekly newsmagazine program ‘The Sunday Edition’ interviewed Sharon Squassoni, a former U.S. government employee who is a member of the Science and Security Board of the Bulletin of the Atomic Scientists. She told CBC that the two nuclear weapons threats in the world today are Russia and North Korea. She cited a “Russian invasion of Crimea” in 2014 and North Korea’s missile development program as proof. (The 24-minute CBC interview is here.) 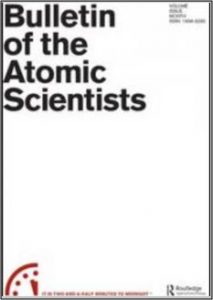 Talking of North Korea, she called the rising conflict with the U.S. a case of “two bullies in a playground”. She conveniently neglected to mention the nuclear weapons arsenal that the U.S. maintains on Korean soil, the scorched-earth war killing millions and using chemical weapons that the U.S. waged against the Korean people from 1950-53, and the recent U.S. deployment of the advanced TAHAAD missile system in South Korea. That deployment has been protested by millions of people in South Korea and also by the Chinese government.

Whatever. If Squassoni is aware of the history surrounding the crisis-level tensions on the Korean peninsula, she deemed them not worthy of mention. Nor did CBC host Michael Enright deem them worthy of mention.

The claim of a Russian “invasion” of Crimea is novel. Until now, anti-Russia commentators have not protested an “invasion” but, rather, the conduct of the approximately 20,000 Russian soldiers who were already present in Crimea in 2014 by virtue of a longstanding treaty between Russia and Ukraine.

When Ukraine’s elected president was overthrown in a violent coup on February 21, 2014, the Russian military in Crimea moved decisively to protect Russia’s historic military base in the Crimean coastal city of Sebastopol. It protected the civilian population against threats and incursions by armed, Ukrainian ultranationalist paramilitaries in February and March of 2014. It also ensured security during the March 16, 2014 referendum to secede from Ukraine and rejoin the Russian Federation. That referendum was conducted by the elected and constitutional government of the Autonomous Republic of Crimea, which came into existence following the dissolution of the Soviet Union in 1991.

In contrast to the extreme violence taking place in Ukraine at the time of the ‘Maidan coup’ and the even-more violent civil war launched by the new governing regime in Kyiv  beginning in April 2014, Crimea has been an oasis of peace and non-violence. The number of lives lost during clashes in February and March 2014 can be counted on one hand. In the eastern Ukraine region of Donbass, on the other hand, Kyiv’s civil war has killed more than 10,000 people and displaced several million.

The war in eastern Ukraine shows no sign of ending, notwithstanding the constant handwringing by the leading European Union governments who are, in reality, providing vital diplomatic and military cover to Kyiv’s war by blaming ‘both sides’ of the conflict and doing nothing to curb Kyiv’s violations of the February 2015 ‘Minsk-2’ ceasefire and peace agreement. The United States, Britain and Canada provide training and weapons for the Ukrainian military and its extremist, paramilitary legions.

Since 1947, the Science and Security Board of the Bulletin of the Atomic Scientists has maintained the Doomsday Clock as a symbol of the likelihood of a global catastrophe that would cause irrevocable harm to human existence. Since 2007, the clock’s setting has expanded beyond the nuclear war danger to also reflect ecological, biological and other dangers. Its original setting in 1947 was seven minutes to midnight. It has been set backward and forward 22 times since then, the smallest ever number of minutes to midnight being two (in 1953) and the largest seventeen (in 1991). As of January 2017, the Clock is set at two and a half minutes to midnight. (Wikipedia.)

In her CBC interview, Squassoni defended the multi-billion dollar upgrade and expansion of the U.S. nuclear arsenal begun under President Barak Obama and now being carried forward by the Donald Trump regime. President Obama, Squassoni said, “saw the need to keep those weapons and complexes in good shape.” She opined that perhaps one part of the original Obama plan is excessive and could be set aside—development of long-range, nuclear cruise missiles.

In addition to her membership on the Science and Security Board of The Bulletin of the Atomic Scientists, Sharon Squassoni is the director of the Proliferation Prevention Program at the Center for Strategic and International Studies in Washington DC. She formerly worked for the U.S. Arms Control and Disarmament Agency and with the Congressional Research Service at the Library of Congress.