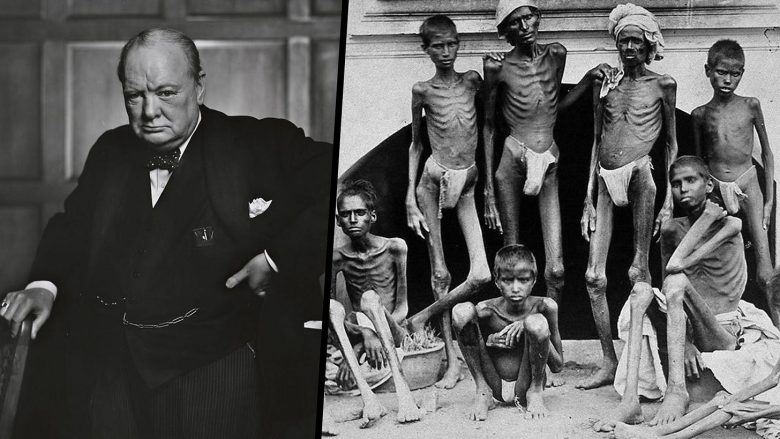 In this important and timely article, accompanying video and podcast, on the British Raj’s two century imperialist history in what is now India, Pakistan and Bangladesh, Ben Norton reveals details of a scholarly study and the work of other scholars which shows that at the height of British imperialist power, just forty years from 1880 to 1920, British colonialism caused the deaths of 165 million people, while stealing trillions of dollars of wealth. The global capitalist system was founded on genocide and western rightwing establishment icon Winston Churchill himself has the blood of millions of Indians on his hands.
________________________

British colonialism caused at least 100 million deaths in India in roughly 40 years, according to an academic study.

And during nearly 200 years of colonialism, the British empire stole at least $45 trillion in wealth from India, a prominent economist has calculated.

In the report, the scholars estimated that India suffered 165 million excess deaths due to British colonialism between 1880 and 1920.

“This figure is larger than the combined number of deaths from both World Wars, including the Nazi holocaust,” they noted.

They added, “Indian life expectancy did not reach the level of early modern England (35.8 years) until 1950, after decolonization.” 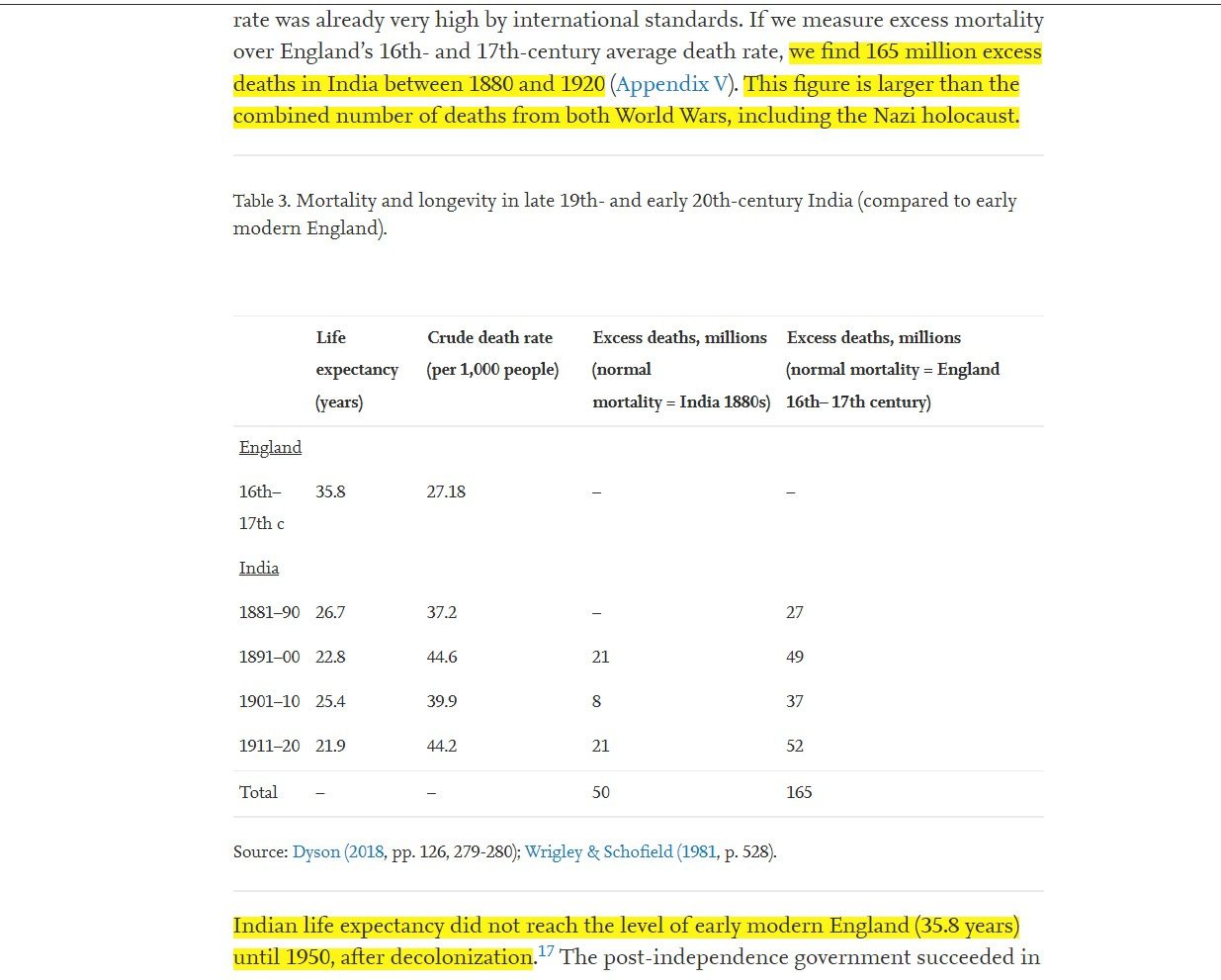 Hickel and Sullivan summarized their research in an article in Al Jazeera, titled “How British colonialism killed 100 million Indians in 40 years.”

According to research by the economic historian Robert C Allen, extreme poverty in India increased under British rule, from 23 percent in 1810 to more than 50 percent in the mid-20th century. Real wages declined during the British colonial period, reaching a nadir in the 19th century, while famines became more frequent and more deadly. Far from benefitting the Indian people, colonialism was a human tragedy with few parallels in recorded history.

Experts agree that the period from 1880 to 1920 – the height of Britain’s imperial power – was particularly devastating for India. Comprehensive population censuses carried out by the colonial regime beginning in the 1880s reveal that the death rate increased considerably during this period, from 37.2 deaths per 1,000 people in the 1880s to 44.2 in the 1910s. Life expectancy declined from 26.7 years to 21.9 years.

In a recent paper in the journal World Development, we used census data to estimate the number of people killed by British imperial policies during these four brutal decades. Robust data on mortality rates in India only exists from the 1880s. If we use this as the baseline for “normal” mortality, we find that some 50 million excess deaths occurred under the aegis of British colonialism during the period from 1891 to 1920.

Fifty million deaths is a staggering figure, and yet this is a conservative estimate. Data on real wages indicates that by 1880, living standards in colonial India had already declined dramatically from their previous levels. Allen and other scholars argue that prior to colonialism, Indian living standards may have been “on a par with the developing parts of Western Europe.” We do not know for sure what India’s pre-colonial mortality rate was, but if we assume it was similar to that of England in the 16th and 17th centuries (27.18 deaths per 1,000 people), we find that 165 million excess deaths occurred in India during the period from 1881 to 1920.

While the precise number of deaths is sensitive to the assumptions we make about baseline mortality, it is clear that somewhere in the vicinity of 100 million people died prematurely at the height of British colonialism. This is among the largest policy-induced mortality crises in human history. It is larger than the combined number of deaths that occurred during all famines in the Soviet Union, Maoist China, North Korea, Pol Pot’s Cambodia, and Mengistu’s Ethiopia.

"This is among the largest policy-induced mortality crises in human history. It is larger than the combined number of deaths that occurred during all famines in the Soviet Union, Maoist China, North Korea, Pol Pot’s Cambodia, and Mengistu’s Ethiopia." https://t.co/eTGQzRkTyn

This staggering figure does not include the tens of millions more Indians who died in human-made famines that were caused by the British empire.

In the notorious Bengal famine in 1943, an estimated 3 million Indians starved to death, while the British government exported food and banned grain imports.

Academic studies by scientists found that the 1943 Bengal famine was not a result of natural causes; it was the product of the policies of British Prime Minister Winston Churchill.

The Bengal famine of 1943 killed 2-3 million people, when Bengal was part of British-ruled India.

There was food — but Winston Churchill ordered it be exported and stockpiled in case Europe needed it as the war dragged on.https://t.co/rIs4vz1yWG pic.twitter.com/ue1H4gBkfZ

Churchill himself was a notorious racist who stated, “I hate Indians. They are a beastly people with a beastly religion.”

Churchill’s own scholarly supporters admitted that he “expressed admiration for Mussolini” and, “if forced to choose between Italian fascism and Italian communism, Churchill unhesitatingly would choose the former.”

Churchill's own hagiographers admitted, "if forced to choose between Italian fascism and Italian communism, Churchill unhesitatingly would choose the former"

In 1935, Churchill praised Hitler for his "courage" https://t.co/kTkoaaOW5g

Indian politician Shashi Tharoor, who served as an under-secretary general of the United Nations, has exhaustively documented the crimes of the British empire, particularly under Churchill.

“Churchill has as much blood on his hands as Hitler does,” Tharoor stressed. He pointed to “the decisions that he [Churchill] personally signed off during the Bengal famine, when 4.3 million people died because of the decisions he took or endorsed.”

Award-winning Indian economist Utsa Patnaik has estimated that the British empire drained $45 trillion of wealth from the Indian subcontinent.

In a 2018 interview with the Indian news website Mint, she explained:

Between 1765 and 1938, the drain amounted to £9.2 trillion (equal to $45 trillion), taking India’s export surplus earnings as the measure, and compounding it at a 5% rate of interest. Indians were never credited with their own gold and forex earnings. Instead, the local producers here were ‘paid’ the rupee equivalent out of the budget—something you’d never find in any independent country. The ‘drain’ varied between 26-36% of the central government budget. It would obviously have made an enormous difference if India’s huge international earnings had been retained within the country. India would have been far more developed, with much better health and social welfare indicators. There was virtually no increase in per capita income between 1900 and 1946, even though India registered the second largest export surplus earnings in the world for three decades before 1929.

Since all the earnings were taken by Britain, such stagnation is not surprising. Ordinary people died like flies owing to under-nutrition and disease. It is shocking that Indian expectation of life at birth was just 22 years in 1911. The most telling index, however, is food grain availability. Because the purchasing power of ordinary Indians was being squeezed by high taxes, the per capita annual consumption of food grains went down from 200kg in 1900 to 157kg on the eve of World War II, and further plummeted to 137kg by 1946. No country in the world today, not even the least developed, is anywhere near the position India was in 1946.

The modern capitalist world would not exist without colonialism and the drain. During Britain’s industrial transition, 1780 to 1820, the drain from Asia and the West Indies combined was about 6 percent of Britain’s GDP, nearly the same as its own savings rate. After the mid-19th century, Britain was running current account deficits with Continental Europe and North America, and at the same time, it was investing massively in these regions, which meant running capital account deficits too. The two deficits summed to large and rising balance of payments (BoP) deficits with these regions.

How was it possible for Britain to export so much capital—which went into building railways, roads and factories in the U.S. and continental Europe? Its BoP deficits with these regions were being settled by appropriating the financial gold and forex earned by the colonies, especially India. Every unusual expense like war was also put on the Indian budget, and whatever India was not able to meet through its annual exchange earnings was shown as its indebtedness, on which interest accumulated. 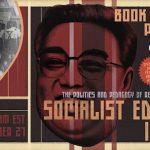 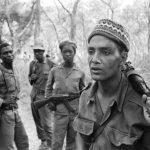