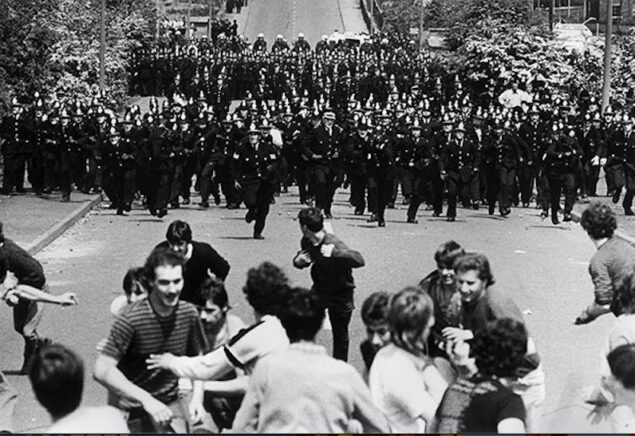 On 6 November 2020, British solicitor Gareth Peirce issued a statement on behalf of the National Union of Mineworkers (NUM) to the Under Cover Policing Inquiry (UCPI), regarding policing of the 1984-5 strike. The statement made it clear that MI5 played a key role in helping to defeat the strike. Evidence elsewhere backs that up.

On 6 November 2020, solicitor Gareth Peirce issued a statement on behalf of the National Union of Mineworkers (NUM) to the Under Cover Policing Inquiry (UCPI), regarding policing of the 1984-5 strike. The statement made it clear that MI5 played a key role in helping to defeat the strike. Evidence elsewhere backs that up.

The statement explains how in 1979:

a newly elected government under Margaret Thatcher set in train a plan to make the Union and its members the focus of exceptional and largely secret initiatives and operations involving the Security Services, the police, and relationships cultivated by all three with selected media. Some initiatives were too flagrant to remain secret; others have only recently come to light and others, it is suspected, remain as yet undiscovered.

Five years later, after an announcement by the National Coal Board (NCB) that it would be closing 20 pits and 20,000 jobs, the strike began.

Peirce adds how there was “compelling evidence” of:

i. The use by the police of the criminal process to wrongly arrest, accuse and fabricate evidence against individual members of the NUM.

ii. The use of premeditated police violence.

iii. Collusion by the police in these actions by and with national media.

iv. The use of informers, infiltrators, provocateurs, attempted “frame-ups”, bugging and surveillance on an exceptional scale.

the Prime Minister [Margaret Thatcher] said “We had to fight an enemy without in the Falklands. Now the war had to be taken to the enemy within which is a much more difficult fight and more dangerous to liberty”. The language used was of conspiracy, of subversion of law, of enemies of the state – calculated signals of unambiguous clarity being given to all government agencies and police forces that the gloves should come off in the “war with the NUM”.

Peirce explans how police were deployed to:

intercept [striking miners’] vehicles, to stop pickets from assembling and to disperse “excessive” numbers. Non existent extended powers were claimed by police in practice, to turn back miners on pain of arrest many miles from the picket lines they intended to join. Bail conditions following arrest and charge imposed boundaries on free movement thereafter. Pit villages were cordoned off; Fitzwilliam in West Yorkshire, Blidworth in Nottinghamshire and Grimethorpe in South Yorkshire – the villages occupied often by police on horseback and in riot gear, imposing curfews and preventing villagers from leaving.

To organise this deployment:

The [police] National Reporting Centre which co-ordinated mutual aid was able to call on a total of 13,000 officers in police support groups drawn from each of the 43 police forces of England and Wales. …

Mass police violence against striking miners at what became known as the Battle of Orgreavewas later followed by allegations of fabricated evidence:

One description of what happened at Orgreave says: “It was a miracle no-one was killed. One officer was seen on television straddling a defenceless miner on the ground and battering him repeatedly about the head with his truncheon”.

Arrests of miners for alleged rioting led to a trial in May 1985. But the trial collapsed and in time the miners charged were awarded £500,000 by South Yorkshire Police.

each strand of police and intelligence activity that had been focussed upon the destruction of the Union. The Union pointed to:

(i) The apparent sharing and absorption by police of a significant part of MI5’s controversial “counter subversion” work by Special Branch and by particular units.

Also, there were “Reports that in the run up to the miners’ strike, MI5 gave Special Branch officers advanced training in agent handling at the Fort Monckton MI5 school outside Portsmouth”.

Peirce further referred to “a secret public intelligence unit to infiltrate and monitor groups which “threatened order” to go beyond Special Branch investigation of subversive groups and activities and intended to concentrate on “legitimate groups like the NUM”.

There were reports, too, of infiltration by MI5 of the NUM HQ. Indeed, the former assistant chief constable of South Yorkshire Police Tony Clement subsequently confirmed that Special Branch, which liaise with MI5, had a “fairly senior man within the NUM”, working undercover.

in parliament as an undercover agent “sent into the NUM to destabilise and sabotage the union at its most critical juncture”. Windsor, who had himself filmed embracing Colonel Gadafy at the height of the strike, falsely claimed later that Scargill had used Libyan money to pay off a mortgage – tying the union up in a string of legal investigations. Windsor subsequently decamped to France, where he has been found by the French courts to have signed documents he claimed were forged by Scargill.

A key covert organiser of the government’s fight against the miners was David Hart. He was a founder of the right-wing Committee for a Free Britain. He was also publisher of British Briefing(BB), authored/edited by former MI5 ‘F Branch‘ head Charles Elwell. After seeing copies of World Briefing (the predecessor to BB), media mogul Rupert Murdoch reportedly funded Hart to the tune of £150,000 in addition to three payments of £40,000 which went direct to BB.

During the 1984-5 strike, Hart provided money to miners who were members of the scab National Working Miners.

The term ‘enemy within’ can mean anything. Indeed, whistleblower Annie Machon observeshow one MI5 file, ‘Subversion in contemporary music’ referred to the bands Crass and the Sex Pistols, as well as, “surprisingly”, UB40. Regarding the latter, not so: they headed a benefit concert (co-organised by this author) for the anarchists in the ‘Person’s Unknown‘ trial.

Machon goes on to point out that over the years, individuals “worthy of MI5 investigation” included:

As to government claims regarding the miners’ strike, Machon gives her view:

Was it the miners struggling to protect their jobs and communities? Or political activists holding meetings, peace demonstrations and standing in elections? Or was it the state, with its undemocratic, unaccountable, law-breaking secret spies?

In other words, it’s not just miners but anyone who appears, rightly or wrongly, to be a threat to the Conservative status quo. Indeed, currently the Boris Johnson led government is progressing a bill to legalise the criminal activities of Covert Human Intelligence Sources (CHIS) who work with the police, MI5, and other state agencies. That bill, as with the sustained attack on workers over decades, amounts to blatant class war.