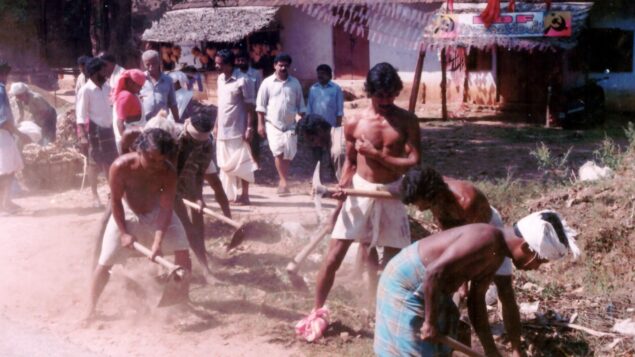 This year marked the 25th anniversary of Kerala’s iconic People’s Plan Campaign, which institutionalized community participation in decision-making at the local administrative level.

The Left Democratic Front (LDF) of the south Indian State of Kerala, led by the Communist Party of India (Marxist), came to power for the second consecutive time in April this year, securing 99 out of 140 seats in the State Legislative Assembly. This victory broke a 40-year-old trend of incumbents losing the elections. One of the key factors behind this victory was the successful response of the government to natural disasters, such as floods, and the COVID-19 pandemic. The highlight of this response was a community-centered approach with thorough people’s participation.

People’s participation has been a feature of many other important initiatives in the State too. The ‘Public Library Movement’ helped set up reading rooms and little libraries while the ‘Literacy Movement’ contributed to Kerala becoming the most literate State in the country. Another historic example is the ‘People’s Plan Campaign,’ which celebrates its silver jubilee this year.

The People’s Plan Campaign, launched on August 25, 1996 by the then LDF government under E K Nayanar, focused on decentralization through the process of bringing the government and governance closer to the people. At the heart of the plan was community participation in decision-making. Experts laud the contribution of the People’s Plan to the strides Kerala has made in crucial fields like education, health, local infrastructure and the like, while reducing poverty. Considered the brainchild of EMS Namboodiripad, the first Chief Minister of Kerala and Communist ideologue, who called it the “next big thing” after land reforms, the campaign was part of the Ninth Plan of the State Planning Board (SPB), an autonomous body that assists the state government in formulating development plans. The campaign was also supported by a host of intellectuals, activists, media persons, bureaucrats and other public figures, alongside leftist and progressive organizations.

The launch of this initiative also took place at a crucial time in India’s economic and political history. In 1991, the P V Narasimha Rao-led Congress government introduced the Liberalization, Privatization, Globalization (or ‘LPG’ for short) Policy, a decisive move towards neoliberalism. It was also the time when there was intense demand from international organizations such as the International Monetary Fund (IMF) and World Bank to reduce state spending and the role of the state in society as a whole. When ‘TINA,’ (There Is No Alternative) was the buzzword, Kerala proved that a better world was possible by offering a radical alternative based on people’s participation in their daily affairs.

“Since this was a new initiative, we were all very excited! People usually don’t have a say in what the municipality does. But in this case, since they could decide for themselves what to do, everyone was quite interested. Be it a road construction project or an irrigation program. People would sit down and discuss how to go about it,” recollects P K Asha, the Municipal Chairperson of Thalassery, a coastal town in northern Kerala’s Kannur district, during the first phase of the plan.

As mentioned above, the campaign was made possible with the careful devolution of the Ninth Plan budget.According to data cited by T. M. Thomas Issac and Richard Frankie in People’s Planning: Kerala, Local Democracy and Development, the annual plan for the state for the year 1997-98 was Rs. 2855 crores (387,974,515 USD), out of which Rs. 1025 crores (139,290,325 USD), i.e., 36% of the total budget was reserved for devolution. Out of the Rs. 1025  crores, Rs. 749 crores ( (101,783,857 USD) were the actual grant-in-aid to local bodies. The plan funds were allocated between rural and urban local bodies according to their population ratio, i.e., 85:15. Guidelines were provided to local bodies to utilize the funds efficiently. The local bodies were aware of the exact amount of plan allocation that they would receive. This prevented the executive from tampering with the funds later. With such assured allocations, local bodies were able to take up development projects confidently.

P K Asha says, “In our Thalassery Municipality, we worked on at least 20 drinking water programs. Even though the municipality did all the infrastructure work, it was the people who decided on what to do. Meetings at local levels were held and problems faced by the people there were discussed in detail. The consumers of the project then formed a committee themselves to discuss more matters. Some of these projects are still going on.”

The People’s Plan was one of the major reasons for substantial improvements in public health, public education, rural infrastructure and general well-being over the decades. 28% of the population was dependent on public health facilities in 1991 and by 2018, it increased to 48%. More than 600,000 students in Kerala shifted from private schools to public schools. Infant mortality came down to 7% and Kerala achieved the UN’s Sustainable Development Goals (SDG) target for IMR reduction, set at 8% for 2020. Rural roads, which were 115,000 km in 1995-96, increased to 231,000 km in 2018-19. The number of people under the poverty line decreased from 25% in 1993-94 to 6% in 2011-12. The campaign also gave birth to self-help groups like Kudambashree, the world’s largest network of women with more than 41,00000 members. The mission of the organization is to eradicate extreme poverty through community action.

So what’s next for the People’s Plan? Dr. T M Thomas Isaac, one of the People’s Plan campaign architects who subsequently became the State finance minister, wrote on Facebook, “The excitement of the popular planning period must be restored. Participation should increase. Corruption must be eradicated. Modern science and technology should be incorporated in agricultural, small and industrial sectors. We must remember that we are in the transition to a society of knowledge. Watershed master plans should be brought along with district plans. Urban planning needs to be improved further. Absolute poverty must be eradicated. Women’s equality must be ensured. Eco-friendly policies must come into place. The marginalized, elderly and disabled must be included in planning. The next 25 years should be about shaping Kerala up like this.”