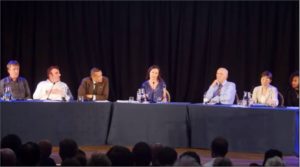 ‘Building alliances after Brexit’ forum in London on July 5, 2016

On July 5 in London, 1,000 people gathered for a public forum of the Compass organization to discuss ‘Alliance building in post-Brexit Britain’.

Panelist and Guardian reporter John Harris spoke about why the ‘Leave’ vote was so high in the working class regions of Britain devastated by globalized capitalism. He argued for a ‘new politics’ on the left which takes account of the deep working class opposition to that globalization. He says the ‘Leave’ outcome must be respected. Watch his 12-minute speech here:

The full video of the July 5 conference (two hours) is here, or click the screen below. In addition to John Harris, panelists were MP Caroline Lucas (Green Party), MP Clive Lewis (Labour Party, and Jeremy Corbyn supporter), Tommy Sheppard (Scottish National Party), Amina Gichinga (Take Back the City) and former Liberal Democrat MP Vince Cable. Panelist presentations were followed (at the one hour, 13-minute mark) by ten minutes of contributions from audience members. Panelists were finally asked  to respond to several questions by the moderator concerning how a “progressive alliance” can be built in Britain following the Brexit vote.

*  We were overwhelmed by the response to our event in London on July 5 on Post-Brexit Alliance building, which is now completely sold out. For those not based in London or unable to get a ticket, we will be live-streaming the event on the Compass Youtube channel so do watch along live.

You’ll also be able to engage online by commenting on the stream – we’ll be reading some of the comments to the panel when the session opens to the floor. You can also tweet us during the event @compassoffice, #ProgressiveAlliance.

This event will be the first in a series around progressive alliance building – you can read more about our plans, support the project through our crowdfund, or if you are interested in organising an event in your local area, get in touch with [email protected]. If you aren’t already please consider becoming a member of Compass and supporting our work long-term.

*  The urgent need for a progressive alliance

Letter to The Guardian on the need for progressive bridge-building in Brexit Britain, by Green Party Member of Parliament Caroline Lucas, July 4, 2016:


“Is there any waking up from this nightmare, a glimmer of light,” asks Polly Toynbee, at the end of her searing examination of the pent-up “seething anti-Westminster wrath” which found its expression last week, and which helps to explain the victory of the leave campaign (Dismal, lifeless, spineless – Corbyn let us down again, 25 June).

If there is to be any hope for progressive politics, the answer has to be yes – and the solution lies in Toynbee’s own analysis. As she acknowledges, our electoral system is responsible for the fact that the concerns of vast numbers of people routinely go unheard, while parties fight for the swing voters of the centre ground. That’s precisely why we urgently need to build a progressive alliance for electoral reform.

Having lost control in Scotland, and with constituency boundary changes on the way, it must be increasingly clear to Labour that they cannot win an outright majority at the next election, no matter who their leader is. Instead of indulging in months of introspection and infighting, this is their opportunity to recognise that a more plural politics is in both their electoral and political interests. And with the growing likelihood of an early general election, the importance of progressive parties working together to prevent the formation of a Tory-Ukip-DUP government that would seek to enact an ultra-right Brexit scenario is ever more pressing.

It’s no surprise that leave’s message to “take back control” stuck. Many people do indeed feel powerless. Ensuring that everyone’s voice is heard in our political system is the first step towards healing the deep divisions that this referendum has revealed. I call on other progressive parties to join us in fighting to achieve that.

*   About Compass:
Compass is a home for those who want to build and be a part of a Good Society; one where equality, sustainability and democracy are not mere aspirations, but a living reality. We are founded on the belief that no single issue, organisation or political party can make a Good Society a reality by themselves so we have to work together to make it happen. Compass is a place where people come together to create the visions, alliances and actions to be the change we wish to see in the world… 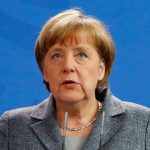 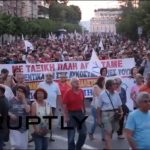 ‘No to militarism!’: Anti-war activists mirror NATO meeting in Warsaw with own summitEurope - East, Europe - West