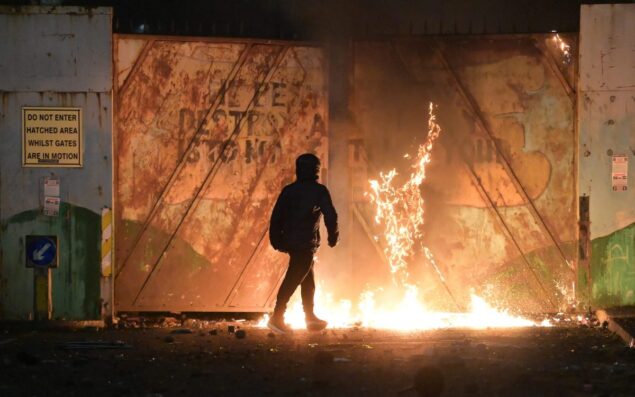 Social unrest has broken out in the North of Ireland over the botched Brexit deal, which now threatens to upend either its union with the UK or the Good Friday Agreement that brought peace 30 years ago.

By Radhika Desai
Published on TRNN, May 19, 2021
____________________________________
The 1999 Good Friday Agreement brought to an end 30 years of strife in the North of Ireland. Now, less than 25 years after the Agreement was made, social tensions are rising again, prompting many to fear a return to “the Troubles” of the past. In the wake of Prime Minister Boris Johnson’s botched handling of Brexit, Northern Ireland is now on the precipice of either breaking its union with the UK or upending the social peace embodied in the Good Friday Agreement. TRNN contributor Radhika Desai takes a deep dive into the unfolding political situation with economist and political advisor Michael Burke.
Headline photo: Nationalists and Loyalists riot against one another at the Peace Wall interface gates which divide the two communities on April 7, 2021 in Belfast, Northern Ireland. Photo by Charles McQuillan via Getty Images.
Editors’ Note: While we don’t necessarily share the views we publish on New Cold War, we do attempt to provide readers with a range of views. This is because your right to make your own mind up depends on your being fully informed.
Share
Tweet
Share
Pin