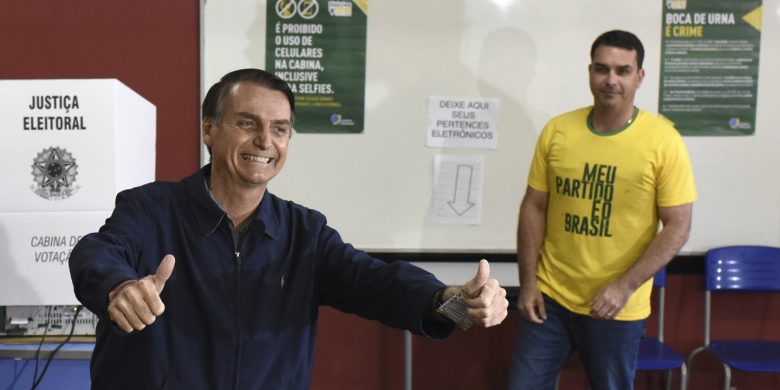 Until recently better known for his outspoken and often outrageous jingoistic, racist misogynistic and homophobic comments, the first round results of the Brazilian election has transformed him from marginalized clown into the overwhelmingly dominant force in the country’s political life, although not by a sufficient margin to avoid a run-off. This overview by Glenn Greenwald explores the lessons that need to be learned from this dangerous situation – and the implications such a victory could have for global politics on a broader scale.

First published in The Intercept

For the past thirty years, Congressman Jair Bolsonaro was a fringe extremist in Brazilian politics, known mostly for outlandish, deliberately inflammatory quotes in which he paid homage to the most notorious torturers of the 1964-1985 military regime, constantly heralded the 1964 coup as a “defense of democracy,” told a female socialist colleague in Congress that she was too ugly to “deserve” his rape, announced that he’d rather learn that his son died in a car accident than was gay, and said he conceived a daughter after having four sons only due to a “moment of weakness.” (Last September, he used Google to translate a Brazilian epithet for LGBTs to, in essence, call me a faggot on Twitter).

His policy prescriptions were even more deranged. Western media has often referred to him as “Brazil’s Trump” but that is wildly inaccurate, understating the case by many magnitudes. In temperament, ideology, and personal history, Bolsonaro – a former Army Captain during Brazil’s notorious 21-year military dictatorship – is far closer to Philippines President Rodrigo Duterte or Egyptian dictator General Abdel El-Sisi than Trump.

His primary solution to the nation’s crime epidemic is to unleash the military and police into the nation’s slums and give them what he calls “carte blanche” to indiscriminately murder anyone they suspect to be criminals, acknowledging many innocents will die in the process. He has criticized monsters such as Chile’s Pinochet and Peru’s Fujimori – for not slaughtering more domestic opponents. He has advocated that mainstream Brazilian politicians be killed. He wants to chemically castrate sex offenders. In all respects, the hideous Brazilian military dictatorship that took over Brazil and ruled it for 21 years – torturing and summarily executing dissidents, with the support of the US and UK in the name of fighting Communists – is his model of governance.

As a result of last night’s truly stunning national election in Brazil, Jair Bolsonaro has been instantly transformed from marginalized clown into the overwhelmingly dominant force in the country’s political life. Bolsonaro himself fell just short of winning the 50% needed to win the presidency without a run-off.

But given the margin of victory, he is the overwhelming favorite to win on October 28 against the second-place candidate, ex-São Paulo Mayor Fernando Haddad. Haddad is the previously unknown, hand-picked successor anointed by Lula, the ex-two-term President who had been leading all polls until he was convicted on dubious corruption charges and quickly imprisoned so as to bar his candidacy, then silenced by Brazil’s right-wing judiciary with a series of remarkable prior restraint censorship orders barring all media outlets from interviewing him.

Bolsonaro won with most demographic groups. In the state of Rio de Janeiro, Bolsonaro won a shocking 60% of all votes cast, winning every neighborhood and district, most with more than 50% of the votes cast. 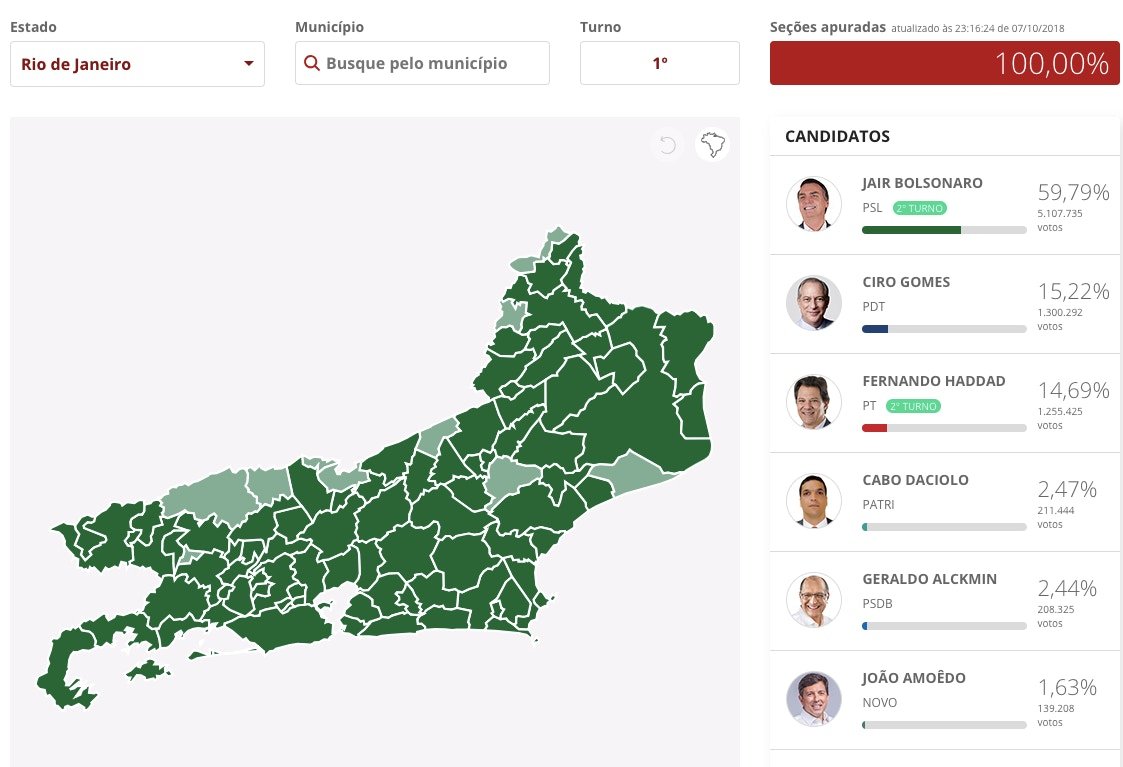 But the extent of Bolsonaro’s new power extends far beyond his likely ascension to the presidency. His party, and those most aligned with it, swept to victory all over the country with shocking margins. 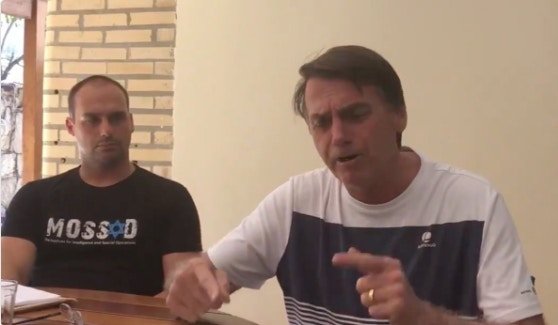 One of Bolsonaro’s sons, Eduardo (fond of wearing Mossad t-shirts, at right), was re-elected to the Federal Congress from São Paulo with the greatest number of votes ever received by any Congressional candidate in the country’s history. Another one of his sons, Rio State Representative Flavio (pictured above, with his father, after voting yesterday), was elected to the Federal Senate from Rio de Janeiro by an overwhelming margin.

What was most startling was how wildly inaccurate Brazil’s typically reliable polling data turned out to be, under-estimating the far-right wave by such a massive quantity that it’s difficult to describe in words. Take, for instance, the Rio de Janeiro Governor’s race, where polls for months showed the clear front-runner to be the highly politically skilled and well-known former Rio Mayor Eduardo Paes, who presided over the 2014 Summer Olympics. Having formed a massive multi-party coalition of the type that has traditionally guaranteed victory, Paes was expected to end up in a run-off with, and then easily dispatch, former Brazilian soccer star (and current scandal-plagued Senator) Romário.

The gubernatorial candidate from Bolsonaro’s party was someone named Wilson Witzel, a totally obscure and unknown magistrate who never held elective office of any kind. Witzel began with almost no support, and even the last poll showed him at 17%, far behind Paes. Last night, he exceeded his polling numbers by 24 points – crushing Paes, who ended up with only 19%, and is now the overwhelming favorite in the run-off. To get a feel for the shockwaves and disorientation flooding the political world in Brazil, just compare Witzel’s final polling number from just the day before the election (on the left) to the actual results last night (on the right):

These types of discrepancies repeated themselves across the country. In Minas Gerais, polls for months showed former (impeached) President Dilma Rousseff with a large lead for the Senate seat. Nobody had any doubt she would win. Instead, she came in fourth, with two right-wing candidates winning instead.

Perhaps most alarming is that the more hateful and fascist a candidate proved themselves to be, the better they did. Last week, one candidate from Bolsonaro’s party, Rodrigo Amorim, shocked and disgusted even some far-right supporters. Wearing a t-shirt with a pistol pointed forward, he took, destroyed, and then on social media proudly displayed an unofficial street sign made to commemorate the life of Marielle Franco, the black, LGBT human rights activist from the favelas who, as a leftist City Councilwoman, was assassinated in March, with her police-linked killers still apprehended (Franco was a close personal friend of mine and worked in the same party in the City Council as my husband). The last line of his social media post – now deleted – read: “Get ready left-wingers: your days are numbered if we’re in charge.”

Last night, Amorim not only was elected to the State House in Rio, but was the most-voted candidate in the state. The other Bolsonaro-aligned candidate promoted there, Daniel Silveira, an officer with Brazil’s military police, was elected to the Federal Congress. One could write thousands of words about the equally shocking statements and actions of numerous candidates who last night not only won but won with overwhelming mandates.

In sum, it is virtually impossible to overstate the threat level posed to democracy and human rights in the world’s fifth most-populous country as a result of last night’s election. And unlike in the U.S. or in the UK, which have old, strong, long-established democratic institutions that can limit the excesses and worst abuses of demagogues and authoritarians, Brazil has none of that. Spiraling from multiple crises – suffocating economic inequality, an epidemic of violence worse than many war zones, and a corruption scandal so sweeping that it has infected the core of almost every faction of the ruling class – this is a country with little to no ability to impose limits on what Bolsonaro wants to do.

Add to that the sheer youth of Brazilian democracy – only 33 years old: the temporal equivalent of the U.S. in 1820 or so – and it’s remarkably easy to envision a quick return to the military rule that imposed so many atrocities on so many segments of the population. That all of this has been ushered in democratically should be, but likely will not be, another warning sign to western democracies that are confronting similar dynamics, albeit ones that are unfolding somewhat more gradually.

To be sure – as is true of Trump, Brexit, and the rise of right-wing extremism throughout Europe – some substantial minority of Bolsonaro voters are motivated by classic bigotry, racism, anti-LGBT animus, resentment toward the indigenous population, and just a general tribal anger that seeks scapegoats for their plight. But many, probably most, are none of those things.

Many, instead, are motivated by legitimate grievances toward an establishment ruling class that has failed them on all levels, that expresses indifference if not outright contempt for their suffering and loss of hope, that they blame, often with good reason, for enacting policies that have destroyed their futures while refusing to accept any responsibility for it. And once that framework is adopted, any perceived enemy of that ruling class becomes their friend, or at least someone whose vows of destruction become more appealing than vows to preserve the system they justifiably despise (the reality is that Bolsonaro (like Trump), with his Chicago-trained neoliberal economic guru, will serve the economic interests of the establishment with great devotion at the expense of his working-class voters, but the perception of his anti-establishment animus is what matters).

The standard establishment reaction in the face of rising demagogues like Bolsonaro is to denounce those who support them, to call them names, to heap scorn on them, to sanctimoniously lecture them that their choices are primitive, retrograde, ignorant and illegitimate. That only serves further to exacerbate the dynamic.

As I wrote after the enactment of Brexit, and then again after Trump’s victory, unless and until the establishment classes of the world’s democracies begin to cease blaming everyone else and instead engage in serious self-critique, we’re going to have far more Brexits and Trumps – and far worse ones. As I wrote in June, 2016, after Brexit passed:

Instead of acknowledging and addressing the fundamental flaws within themselves, [establishment factions] are devoting their energies to demonizing the victims of their corruption, all in order to delegitimize those grievances and thus relieve themselves of responsibility to meaningfully address them. That reaction only serves to bolster, if not vindicate, the animating perceptions that these elite institutions are hopelessly self-interested, toxic, and destructive and thus cannot be reformed but rather must be destroyed. That, in turn, only ensures there will be many more Brexits, and Trumps, in our collective future.

Unfortunately for the 210 million people who live in Brazil, last night’s election was one of the most vivid and terrifying examples yet of this proposition.

But it will by no means be the last, or the worst. It’s all part of a global trend, undermining liberal democracies, fueled by their own failures, that has no end in sight. Quite the contrary: the trend seems to be accelerating, with each country’s similar movement synergistically feeding and strengthening one another. 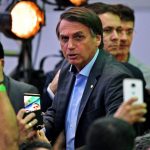 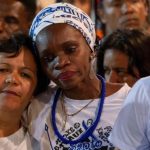