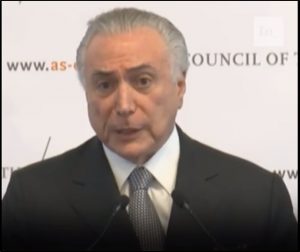 The Intercept Brasil’s Inacio Vieira yesterday reported one of the most significant pieces of evidence yet about the real reason for the impeachment of Brazil’s elected president, Dilma Rousseff. Speaking to a group of U.S. business and foreign policy elites on September 22, the country’s installed president, Michel Temer, admitted that what triggered the impeachment process was not any supposed “budgetary crimes” but rather Dilma’s opposition to the neoliberal platform of social program cuts and privatization demanded by Temer’s party and the big-business interests that fund it.

But what’s as revealing as Temer’s casual acknowledgement of coup-type motives is how Brazil’s large media — which is united in favor of impeachment — has completely ignored his comments. Literally not one of Globo’s countless media properties, nor the nation’s largest newspaper, Folha, nor any of the nation’s large political magazines have even mentioned these stunning and incriminating remarks from the country’s president. They’ve imposed a total blackout. While numerous independent journalists and websites have reported Temer’s admission, none of Brazil’s major media outlets have uttered a word about it.

The only exception to this wall of silence was a columnist from the right-wing newspaper Estadão, Lúcia Guimarães, who spent several hours on Twitter yesterday completely humiliating herself in a spirited attempt to deny that Temer actually said this. She began by insinuating that The Intercept Brasil made a suspicious “cut” in the video that altered reality — basically accusing Vieira of committing fraud without the slightest evidence, all to protect Temer.

Then, after a Folha columnist sent her a link to the full video showing that nothing was distorted, she nonetheless announced that she would only believe Temer said this once she saw the drives from each camera simultaneously played, and she added that what made the story so suspicious was that President Temer  is a best-selling author of a book on constitutional law who would not say such a thing about impeachment. Only once the full transcript of Temer’s remarks was posted would she finally admit that he really said it, but rather than retract her false accusations or apologize to Vieira and The Intercept Brasil for having implied the video was fraudulently edited, she instead simply posted the relevant part of Temer’s remarks without reference to her prior efforts to smear Vieira, as though she were the one who discovered and was reporting these comments for the first time.

Even once she did finally admit the truth about Temer’s remarks, she bitterly claimed that impeachment opponents were turning the story into a “carnival” and celebrating the revelation.

Although she was forced into it by virtue of having embarrassed herself, all to defend Temer, at least this Estadão columnist acknowledged the existence of this obviously big story. The rest of the large Brazilian media has completely ignored it. Just contemplate that: The installed president of the country admits to a room full of oligarchs and imperialists in New York that he and his party impeached the elected president for ideological and policy reasons, not because of the stated reasons, and the entire big Brazilian press pretends that it never happened, refuses to inform Brazilians about what the installed president admitted, and ignores the huge implications for what this illuminates about Dilma’s removal.

There’s a reason Reporters Without Borders dropped Brazil to 104th in its world press freedom rankings and denounced the country’s large corporate media as a threat to democracy and a free press. As the Brazilian activist Milly Lacombe put it this morning: “Temer confesses to the coup, there exists a recording of the confession, and our corporate media hides what he said. Is that sufficient, or do you need more?”

Through their disgraceful silence, they just provided one of the most vivid examples yet of the truth of RSF’s denunciations. 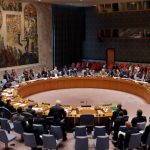 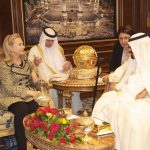