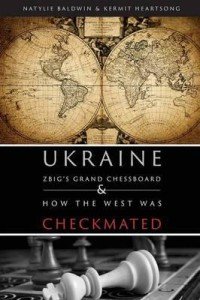 I’m not sure if there’s been a better written book published yet this year than Ukraine: Zbig’s Grand Chessboard and How the West Was Checkmated, but I’m confident there’s not been a more important one. With some 17,000 nuclear bombs in the world, the United States and Russia have about 16,000 of them. The United States is aggressively flirting with World War III, the people of the United States have not the foggiest notion of how or why, and authors Natylie Baldwin and Kermit Heartsong explain it all quite clearly. Go ahead and tell me there’s nothing you’re now spending your time on that’s less important than this.

This book may very well be the best written one I’ve read this year. It puts all the relevant facts — those I knew and many I didn’t — together concisely and with perfect organization. It does it with an informed worldview. It leaves me nothing to complain about at all, which is almost unheard of in my book reviews. I find it refreshing to encounter writers so well-informed who also grasp the significance of their information.

Nearly half the book is used to set the context for recent events in Ukraine. It’s useful to understand the end of the cold war, the irrational hatred of Russia that pervades elite U.S. thinking, and the patterns of behavior that are replaying themselves now at higher volume. Stirring up fanatical fighters in Afghanistan and Chechnya and Georgia, and targeting Ukraine for similar use: this is a context CNN won’t provide. The partnership of the neocons (in arming and provoking violence in Libya) with the humanitarian warriors (in riding to the rescue for regime change): this is a precedent and a model that NPR won’t mention. The U.S. promise not to expand NATO, the U.S. expansion of NATO to 12 new countries right up to the border of Russia, the U.S. withdrawal from the ABM Treaty and pursuit of “missile defense” — this is background that Fox News would never deem significant. U.S. support for the rule of criminal oligarchs willing to sell off Russian resources, and Russian resistance to those schemes — such accounts are almost incomprehensible if you’ve consumed too much U.S. “news,” but are explained and documented well by Baldwin and Heartsong.

This book includes excellent background on the use and abuse of Gene Sharp and the color revolutions instigated by the U.S. government. A silver lining may be found, I think, in the value of nonviolent action recognized by all involved — whether for good or ill. The same lesson can be found (for good this time) in the civilian resistance to Ukrainian troops in the spring of 2014, and the refusal of (some) troops to attack civilians.

The Orange Revolution in Ukraine in 2004, the Rose Revolution in Georgia in 2003, and Ukraine II in 2013-2014 are recounted well, including detailed chronology. It’s truly remarkable how much has been publicly reported that remains buried. Western leaders met repeatedly in 2012 and 2013 to plot the fate of Ukraine. Neo-Nazis from Ukraine were sent to Poland to train for a coup. NGOs operating out of the U.S. Embassy in Kiev organized trainings for coup participants. On November 24, 2013, three days after Ukraine refused an IMF deal, including refusing to sever ties to Russia, protesters in Kiev began to clash with police. The protesters used violence, destroying buildings and monuments, and tossing Molotov cocktails, but President Obama warned the Ukrainian government not to respond with force. (Contrast that with the treatment of the Occupy movement, or the shooting on Capitol Hill of the woman who made an unacceptable U-turn in her car with her baby.)

U.S.-funded groups organized a Ukrainian opposition, funded a new TV channel, and promoted regime change. The U.S. State Department spent some $5 billion. The U.S. Assistant Secretary of State who handpicked the new leaders, openly brought cookies to protesters. When those protesters violently overthrew the government in February 2014, the United States immediately declared the coup government legitimate. That new government banned major political parties, and attacked, tortured, and murdered their members. The new government included neo-Nazis and would soon include officials imported from the United States. The new government banned the Russian language — the first language of many Ukrainian citizens. Russian war memorials were destroyed. Russian-speaking populations were attacked and murdered.

Crimea, an autonomous region of Ukraine, had its own parliament, had been part of Russia from 1783 until 1954, had publicly voted for close ties to Russia in 1991, 1994, and 2008, and its parliament had voted to rejoin Russia in 2008. On March 16, 2014, 82% of Crimeans took part in a referendum, and 96% of them voted to rejoin Russia. This nonviolent, bloodless, democratic, and legal action, in no violation of a Ukrainian constitution that had been shredded by a violent coup, was immediately denounced in the West as a Russian “invasion” of Crimea.

Novorossiyans, too, sought independence and were attacked by the new Ukrainian military the day after John Brennan visited Kiev and ordered that crime. I know that the Fairfax County Police who have kept me and my friends away from John Brennan’s house in Virginia have had no clue what hell he was unleashing on helpless people thousands of miles away. But that ignorance is at least as disturbing as informed malice would be. Civilians were attacked by jets and helicopters for months in the worst killing in Europe since World War II. Russian President Putin repeatedly pressed for peace, a ceasefire, negotiations. A ceasefire finally came on September 5, 2014.

Remarkably, contrary to what we’ve all been told, Russia didn’t invade Ukraine any of the numerous times we were told that it had just done so. We’ve graduated from mythical weapons of mass destruction, through mythical threats to Libyan civilians, and false accusation of chemical weapons use in Syria, to false accusations of launching invasions that were never launched. The “evidence” of the invasion(s) was carefully left devoid of location or any verifiable detail, but has all been decidedly debunked anyway.

The downing of the MH17 airplane was blamed on Russia with no evidence. The U.S. has information on what happened but won’t release it. Russia released what it had, and the evidence, in agreement with eye-witnesses on the ground, and in agreement with an air-traffic controller at the time, is that the plane was shot down by one or more other planes. “Evidence” that Russia shot the plane down with a missile has been exposed as sloppy forgeries. The vapor trail that a missile would have left was reported by not a single witness.

Baldwin and Heartsong close with the case that U.S. actions have backfired, that in fact whether the people of the United States have any idea what is going on or not, the power brokers in Washington have Second Amendmented themselves in the foot. Sanctions against Russia have made Putin as popular at home as George W. Bush was after he’d managed to exist as president while planes were flown into the World Trade Center. The same sanctions have strengthened Russia by turning it toward its own production and toward alliances with non-Western nations. Ukraine has suffered, and Europe suffers from a cut-off of Russian gas, while Russia makes deals with Turkey, Iran, and China. Evicting a Russian base from Crimea seems more hopeless now than before this madness began. Russia is leading the way as more nations abandon the U.S. dollar. Retaliatory sanctions from Russia are hurting the West. Far from isolated, Russia is working with the BRICS nations, the Shanghai Cooperation Organization, and other alliances. Far from impoverished, Russia is buying up gold while the U.S. sinks into debt and is increasingly viewed by the world as a rogue player, and resented by Europe for depriving Europe of Russian trade.

This story begins in the irrationality of collective trauma coming out of the holocaust of World War II and of blind hatred for Russia. It must end with the same irrationality. If U.S. desperation leads to war with Russia in Ukraine or elsewhere along the Russian border where NATO is engaging in various war games and exercises, there may be no more human stories ever told or heard.

David Swanson is an anti-war activist and blogger at War Is a Crime.

UKRAINE: ZBIG’S GRAND CHESSBOARD & HOW THE WEST WAS CHECKMATED

Zbigniew Brzezinski’s The Grand Chessboard: American Primacy and Its Geostrategic Imperatives has long been the operative canon for State Department hawks, neoconservatives and Russophobes. Since the fall of the Soviet Union, the implementation of Zbig’s Grand Strategy has moved at a feverish pace, gobbling up former Soviet satellites and then converting them into NATO forward bases. The endgame for the West, via these moves, has always been to quash Russian and ostensibly Chinese independence, economic viability and, thus, their ability to project power in Eurasia.

Ukraine: ZBIG’s Grand Chessboard & How the West Was Checkmated speaks to the historical and geostrategic moves by the West to control the Eurasian landmass: the broken promises and treaties, the geostrategic missteps and, finally, how Grand Chessboard fundamentalism actually catalyzed Russia’s re-emergence as a global power, shifted geostrategic power eastward and, proverbially, snatched defeat from the jaws of a U.S./NATO victory.

Natylie Baldwin, a graduate of Cal State East Bay, lives in the San Francisco Bay Area. Her fiction and nonfiction have appeared in various publications including Sun Monthly, Dissident Voice, Energy Bulletin, Newtopia Magazine, The Common Line, New York Journal of Books and The Lakeshore. She is currently working on two novels. Kermit Heartsong, management consultant, author, and empirical scientist, has been a keen observer of the geostrategic developments of social, economic, and political systems for nearly three decades. He has written two nonfiction books: The United States of Mammon (2013) and Illusions, Dystopia & Monsters (2014), which speak to the reality of life in the US, its wars, and climate change. Heartsong studied at the University of California Davis for his B.S. Electrical Engineering & Systems with minors in Global Politics and Writing. 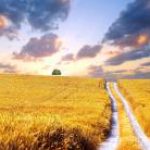