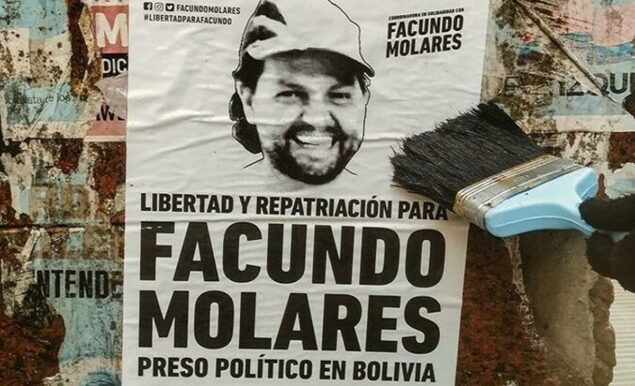 Facundo Molares, an Argentine citizen, was arrested by Bolivia’s coup-born regime, after travelling to the country to cover last year’s election.

In Bolivia, Montero City’s Criminal ruled the cessation of preventive detention measures against Facundo Molares, an Argentine photojournalist who is being investigated for crimes committed during the post-electoral violence that broke out in the country in Nov. 2019.

His lawyer Marco Justiniano noted that irregularities were committed during the hearing process, including the expiration of the 150-day period of preventive detention requested by the Public Prosecutor’s Office.

He also mentioned that Molares’ current health condition is affected by basic illnesses and a positive result for COVID-19.

The Court also authorized Molares to travel to Argentina in order to receive medical attention, although he must report periodically to the Bolivian Consulate in Buenos Aires.

We join the request voiced by Argentine human rights and political organizations so photojournalist Facundo Molares, a political prisoner of the de facto government since November 2019,  can be repatriated based on humanitarian reasons and serious risks on his life.

Molares traveled to Bolivia from Colombia to cover last year’s election that resulted in several acts of violence nationwide and a coup against former President Evo Morales.

After the Public Ministry found that he had used a firearm due to the atomic absorption test, he was arrested and involved in the death of civilians Mario Salvatierra and Marcelo Terrazas. He was sent to Palmasola and then to Chonchocoro prison.

In October, Argentina’s Foreign Ministry presented an official request to Bolivian authorities asking Molares’ release, while denouncing that he was suffering from a “situation of denial of justice” by the coup-born regime.