Neo-Nazis triumph over communists in Ukraine

It’s goodbye Lenin, hello Nazi collaborators in Ukraine these days. Laws signed into effect by President Petro Poroshenko require the renaming of dozens of towns and hundreds of streets throughout the country to eliminate Soviet-era names. At the same time, Ukraine will begin to honor groups that helped Hitler exterminate Ukrainian Jews during World War II. 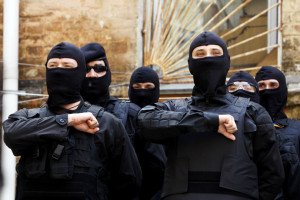 Ukrainians’ desire for a European identity and a break with the country’s Soviet past is Poroshenko’s biggest political asset, but these latest steps should worry the country’s Western allies.

A law Poroshenko signed May 15 bans all Soviet and Nazi symbols, even on souvenirs, and criminalizes “denying the criminal character” of both totalitarian regimes. It bans place names, monuments and plaques glorifying Soviet heroes, Soviet flags and communist slogans. Statues of Lenin have been toppled in many Ukrainian cities since the “revolution of dignity” last year, but the new law goes further.

Big regional centers such as Dnipropetrovsk (named after Grigory Petrovsky, who ran Ukraine in the 1920s and 1930s) and Kirovograd (bearing the name of Sergei Kirov, a Bolshevik leader whose popularity rivaled Stalin’s, causing the latter to have him killed), as well as dozens of smaller towns, will need new names. Lots of towns have streets named after Lenin and Soviet saints, and these will also be erased in the next few months, creating lots of confusion for anyone using old maps (or Google maps, for that matter). Soviet emblems will be removed from buildings and bridges, murals in the subway will be altered.

Ukraine doesn’t need the expense, which former Tax Minister Oleksandr Klimenko put at 5 billion hryvnias ($236 million), though, as a fugitive to Russia, he is hardly impartial. But cost, or even local residents’ nostalgia, are weak arguments against Ukraine’s “decommuinization.” The Organization for Security and Cooperation in Europe, however, has some more relevant ones.

“While I fully respect the often sensitive and painful nature of historical debate and its effect on society, broadly and vaguely defined language that restricts individuals from expressing views on past events and people, could easily lead to suppression of political, provocative and critical speech, especially in the media,” Dunja Mijatovic, OSCE representative on freedom of the media, wrote Poroshenko in April, urging him not to sign the law.

On Monday, she called his decision to sign it “discouraging.” The Ukrainian law is broader than any similar ones passed elsewhere in eastern Europe after the fall of communism: In some countries, communist symbols also are outlawed, but trying to whitewash the overthrown Communist regimes is not a crime, whereas in Ukraine, violations of the “decommunization” law are punishable by a maximum of five years in prison.

Ukraine’s attempts to eliminate its past as a Soviet republic are as extreme as some of the actions taken by Vladimir Putin’s hated post-modern empire, where the parliament is now considering a bill that would ban likening the Stalin regime to Nazism.

To make matters worse, having banned all kinds of foreign totalitarian symbols, Poroshenko also signed a law prescribing that Ukrainians honor a number of nationalist organizations that operated before and during World War II. The law calls them “20th century fighters for Ukraine’s independence,” but some of these groups, such as the Organization of Ukrainian Nationalists and the Ukrainian Insurgent Army (UPA) fought alongside the Nazis, and followed the German occupier’s orders. In an open letter to Poroshenko and Ukrainian legislators, 40 historians from major Western universities wrote:

Not only would it be a crime to question the legitimacy of an organization (UPA) that slaughtered tens of thousands of Poles in one of the most heinous acts of ethnic cleansing in the history of Ukraine, but also it would exempt from criticism the OUN, one of the most extreme political groups in Western Ukraine between the wars, and one which collaborated with Nazi Germany at the outset of the Soviet invasion in 1941. It also took part in anti-Jewish pogroms in Ukraine and, in the case of the Melnyk faction, remained allied with the occupation regime throughout the war.

By quoting this letter, I have just violated the Ukrainian law. The punishment is not clear: A separate law will be required for that.

The U.S. Holocaust Memorial Museum condemned the bill because it bans media criticism of the nationalist groups. “As Ukraine advances on the difficult road to full democracy, we strongly urge the nation’s government to refrain from any measure that preempts or censors discussion or politicizes the study of history,” the museum said in a statement.

It’s easier to legislate on history than to fix Ukraine’s many current problems, from a Soviet-style bureaucracy to the Russian-backed insurgency in the east that appears to be part of Putin’s Soviet revival project[sic]. The “decommunization” laws are not only pointless, they also show the chasm that still separates Ukraine from its goal of joining the Western world.

This commentary was also published in the Canadian daily The National Post, May 20, 2015. 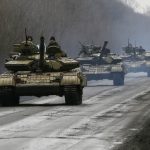 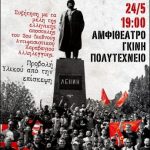 Forum in Athens on May 24: ‘What we saw in Donbass – testimonials and impressions.’Digest, Solidarity with Ukrainian people