RIGA–A cynic might say the Riga Eastern Partnership Summit, which took place in the Latvian capital on May 21-22, achieved even less than its predecessor, the Vilnius Summit of 2013. 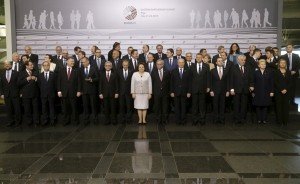 At least in Vilnius the notorious refusal of Ukraine’s then-president Viktor Yanukovich to sign an Association Agreement with the EU was dramatic – the experts had all predicted he would sign – and it had the most dramatic consequences imaginable: a successful revolution.

This time around the same experts predicted not much would happen and were more accurate in their assessment. There was no shortage of rumour in the subterranean pressroom while the limos and Learjets of ministers, prime ministers and presidents from 34 countries were arriving for the summit.

Belarus and Armenia – or was it Belarus and Azerbaijan? – were going to refuse to sign the planned declaration because of the wording over Crimea. Germany and France would meet in secret with Greece to tackle the Grexit threat. France and Germany would meet Ukraine to re-address the Minsk Agreements. Most tantalising of all, freshly re-elected and freshly coiffed British Prime Minister David Cameron was going to arrive late from the EU’s western edge, storm into the meeting, slam down a load of demands for EU reform and ignore the fact that this was supposed to be about the East.

As it turned out, all those rumours had some truth in them, but all were fulfilled in the most bloodless and toothless ways imaginable. The wrinkles with Armenia, Azerbaijan and Belarus, the three countries with no actual interest in becoming EU members, were smoothed out by the simple method of fudging the text on Crimea. Merkel and Hollande met Tsipras and Poroshenko but announced precisely nothing as a result. Even Cameron, hamming it up for the cameras with clenched fists as he went into the meeting, simply invited Jean-Claude Juncker to tea at Chequers.

The actual product of the summit, the reason for the unprecedented sight of several helicopters in Latvian skies at once, patrol boats in the River Daugava and massive traffic congestion throughout capital, was the Riga Declaration, a document that made up for its 13-page length in what it lacked in actual novelty. The words “reaffirm”, “reconfirm”, “remain” and “review” recur throughout, each use of the “re-” prefix flagging up the fact that not a single one of its 30 points could be classed as new.

Everyone had known for a week that Ukraine and Georgia would get an okay for visa-free regimes in a review to take place by December 15 and would start to operate visa-free some time in 2016.

Also as anticipated, Ukraine got the latest €1.8bn of funding for the EU which Poroshenko assured “is not being spent on taking back occupied territories. It is funding for reforms and these reforms will help us to make further steps to deal with de-oligarchisation, changes to the constitution, establishment of rule of law, some judicial reform and other questions.”

The Latvian hosts stage-managed the whole thing admirably – indeed that’s probably one area in which they have definitely bested their southern neighbours. From Riga you can almost hear the Estonians gnashing their teeth as they plot how to raise the bar further during their own EU Presidency in 2018.

The few surprises were only surprising in a half-hearted sort of way. At a fringe event, EU enlargement commissioner Johannes Hahn was unexpectedly presented with three large screeds of paper covered in illegible characters by civil society representatives from Ukraine, Georgia and Moldova.

“This is our symbolic application for full EU membership!” said the pranksters to an accompaniment of applause and flashbulbs. Taken unawares, Hahn was initially delighted but once the words “application for full EU membership” had pushed the word “symbolic” out of the way, he realised the danger he was in and quickly began backtracking, saying how he needed some posters for his office wall.

“It’s important to retain a sense of naivety,” he said, an Austrian subtlety that seemed entirely lost on the showboating EU aspirants.

They were back the next day, too – or at least the Ukrainians and Georgians were. Quite what happened to the Moldovans will remain one of the few mysteries of the summit. Standing politely behind crash barriers outside the hulking grey wedge of the Latvian National Library, they draped a few flags and “re-asserted” that they wanted to join the EU.

“We know it’s not going to happen in the next year or two but definitely we are on the right track,” Viktor Baramania from Georgia told bneIntellinews.

“Our countries are European but politically this is still not recognised. We do not have a formal perspective of membership in the EU,” said Aleksandr Sushko from Ukraine. No-one from Moldova said anything.

Then in the afternoon it was the turn of Latvia’s rampantly pro-Kremlin MEP Tatjana Zhdanoka and her merry band of helpers to demonstrate in a manner so sluggish they practically left a silvery trail behind them.

Standing behind a banner that managed to be both hilarious and terrifying, saying: “Eastern Partnership, a Trigger for War”, Zhdanoka told bne Intellinews: “We are here to say that the Eastern Partnership is a very dangerous instrument for war and real military conflict – we see it in Ukraine. Eastern Partnership countries are being made to choose between agreement with the European Union and the [Russian-led] Customs Union and are losing out.”

“The responsibility for what’s happening in Ukraine lies completely, fully with the United States and European Union,” Zhdanoka said. The demonstrators didn’t even bother shouting. After all, what with the traffic chaos, it would take a long time to get home.

Yet perhaps there was a real, meaningful, human result of the Riga Summit after all, and it came in its very last seconds from Poroshenko.

Having wound up his concluding press conference, with the journalists and photographers already heading for the exits, Poroshenko called them back.

“One more thing!” he said, reading from his mobile phone. “Within half an hour or maybe an hour we will have positive news about the fate of battalion commander Oleg Kuzminykh who defended Donetsk airport. We have a strong hope that this evening we have a great chance that he will be at home.”

Was it the talks with Merkel and Hollande that did it? A bit of quid pro quo with someone else for dropping the Crimea references from the declaration? Who knows. However it happened, if the Riga Summit did result in a prisoner of war heading home to rejoin his family – and perhaps another in the opposite direction – it was not in vain.

Read also:
‘Swatting away the fly’ – At Riga Summit, EU pulls away from Ukraine and its Eastern Partnership, by Alexander Mercouris, Russia Insider, May 25, 2015 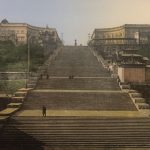 A view from Odessa and Tiraspol (Transniestra)Digest, Europe - East, Ukraine 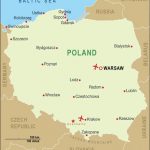