A small socialist grouping in the United States, the ‘Socialist Workers Party’, has published an article in its weekly newspaper, The Militant, supporting the commercial-transport and electricity blockade of Crimea that is spearheaded by the fascist ‘Right Sector’ movement in Ukraine. The blockade was formally endorsed by the Ukrainian government in Kyiv on November 23.

An all-but explicit endorsation of the blockade comes in the final two paragraphs of the article, written by an editor of the newspaper, Naomi Craine. It reads:

Defending the tactic of maintaining the blackout, [Tatar person] Dzhemilev told the Kiev Post Nov. 25 that “it’s bad without electricity, but prison is worse,” reiterating the demand for Moscow to release political prisoners. The Tatars in Crimea “are ready to suffer for some time to allow the pressure to take effect,” he said.

“There can certainly be differing views regarding the sense, morality, etc. of the blockade and now the blackout,” [Halya Coynash of the Kharkiv Human Rights Protection Group] wrote in a Nov. 30 article, “but surely not about the totally reasonable demands made” by the Tatars.

You can read the full story of the transport (including food) and electricity blockade against Crimea here on New Cold War.org. The blockade joins the economic embargo against the peninsula which the European Union, the United States and Canada imposed beginning March 2014. 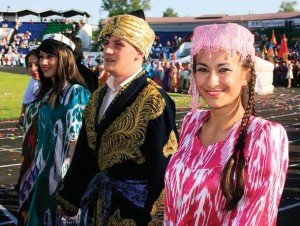 It is rare for a group of Western ‘socialists’ to openly back actions by the extreme right of Ukraine. But many on the international left have bought into the narrative that the March 2014 referendum decision of the Crimean people to secede from Ukraine was a “Russian annexation”, and they raise no protest over the Western embargo and now a blockade against the rebellious peninsula. So the bizarre declaration of support to the blockade by a grouping in the U.S. warrants some examination in order to better understand what is going on more broadly.

The news article by the U.S. grouping echoes Western media when it says that the blockade of Crimea was initiated by “leaders of the Mejlis, the Tatar parliament”. But if you watch any of the multiple videos available online of the Crimea blockade in action, what you will see are the black-hooded vigilantes of the Right Sector.

A few people described as Tatar spokespeople in Ukraine do appear in media reports in support of the blockade. They are Mustafa Dzhemilev and Refat Chubarov–two appointed members of the Ukrainian Rada (parliament)–and a disgruntled Crimean Tatar businessman, Lenur Islyamov.

Dzhemilev[1] and Chubarov, termed by the U.S. group as “historic leaders of the Tatars’ fight for national rights”, have been aligned for several decades with successive governments in Kyiv. During the turbulent years of the 1990s following the dissolution of the Soviet Union, as Crimeans were fighting for language and political rights, including referendums in 1991 and 1994 [2] in favour of full autonomy, the two Tatar leaders were siding with Kyiv. Ukrainian governments, in turn, played the Tatar figures as a ‘Tatar card’ in ongoing, sharp conflicts with elected Crimean leaders.

Today, Kyiv is still playing its Tatar card. In 2014, Dzhemilev and Chubarov were rewarded with appointments to the Rada by the ‘Petro Poroshenko Bloc’, the electoral machine of the Ukrainian president. (Half the seats in the Rada are appointed, proportionately, by the parties receiving more than five per cent of the vote in legislative elections.)

The Crimean people have always bristled at the decision of the Soviet Union in 1954 to transfer political authority over the region from the Russian Soviet republic to the Ukrainian one. They were given no say in the matter. When Ukraine’s elected president Victor Yanukovych was overthrow in a coup in February 2014 and was replaced by a violent, anti-Russia right-wing regime, that was the end of card games. Yanukovych had received the large majority of votes cast in Crimea in the 2010 presidential election. The Crimean people voted overwhelmingly on March 15, 2014 to secede from Ukraine.

The 2014 referendum was organized by the government of the Autonomous Republic of Crimea. This was an elected and constitutional government, unlike the regime that had come into power in Kyiv, including with threats to visit civil war on Crimea if the region did not obey its new, self-declared masters.

The description of the Mejlis as a ‘Tatar Parliament’ is quite inaccurate. The Mejlis was a project created several decades ago in Ukraine-dominated Crimea to gain a larger voice for the Crimean Tatar population. In particular, the right of return as well as compensation for those who had been expelled en masse from the peninsula in 1944, and their descendants, was still a key issue. The Mejlis acted as an ‘executive’ of the periodic, broad assemblies of Crimean Tatars called Kuraltai.

But Crimean social and political institutions today insist that today the Mejlis speaks for only a small segment of Crimea Tatars and that it has effectively reduced itself to being a Trojan horse of the right-wing regime in Kyiv.

One of the most vibrant of the new Tatar organizations today is Milli Firqa, a political party. It traces its political origins to the period following the Russian Revolution when Crimea became an autonomous republic of the Soviet Union. Contrary to the claims of Western propaganda that Crimea has become an authoritarian state, Milli Firqa and other social and political organizations in Crimea do not shy away from voicing criticism of the actions of the Crimean and Russian governments as deemed necessary.

For example, this author wrote an article published in New Cold War.org in April 2015 describing the frustrations of Crimean Tatars that authorities in the new Crimea had not moved quickly to create a Tatar-language public television and radio broadcaster. Earlier articles published in Crimea and translated for New Cold War.org have reported the frustrations of Tatar spokespeople with the sometimes slow pace of settling property and compensation claims of Crimean Tatars returning to the peninsula.[3]

An item appearing on New Cold War.org on December 12 reports on criticisms that more should have be done by authorities in Crimea and in Russia to prepare for a possible cutting of electrical service by Ukraine. (Russia’s capacity to quickly supply electricity to Crimea was hampered by the West’s economic embargo. A Chinese company was engaged to help with supplying the required electricity cable and the technical know-how to install it.) Fears that water supply could be cut next by Ukraine are raising more concerns about preparedness.

During Crimea’s time in Ukraine, the large majority of its population had no official recognition of their languages, namely Russian—the language of the large majority—and Tatar. Ukraine was and remains an officially unilingual country. Today in Crimea, there are three official languages—Russian, Ukrainian and Tatar. 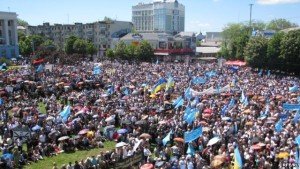 In Simferopol on May 18, 2009, Crimean Tatars commemorate the 65th anniversary of the mass deportation

Russian President Vladimir Putin issued a decree on April 21, 2014 restating an earlier decree from the time of the Soviet Union condemning accusations of collective guilt of the Crimean Tatar population for collaboration with the occupying Nazi German army during World War Two.[4] Putin told a State Council meeting shown live on state television, “I have signed a decree to rehabilitate the Crimean Tatar population, the Armenian population, Germans, Greeks – all those who suffered (in Crimea) during Stalin’s repressions,”

In his address, Putin called for measures to encourage the “national, cultural and spiritual renaissance” of the national minorities in Crimea. The decree says it aims, “to restore historical justice and remove the consequences of the illegal deportation (of the groups) and the violations of their rights.”

The decree says Russia will “foster the creation and development of national-cultural autonomies”.

Crimean Tatars have their own political assembly. Since joining the Russian Federation, they have more rights to education and government services in their language. As with the entire Crimean population, they now have better social services and economic prospects than before. The manipulation of Crimean Tatar aspirations by Western governments, media and misguided leftists and the embargo and blockade against the entire people of Crimea are shameful and should end.

Notes:
[1] In an interview on BBC (through translation) in April 2014, (broadcast on NPR Radio in the United States on April 20), Mustafa Dzhemilev said that life in Crimea is “just like living under a dictatorship” and he dismissed the April 21, 2014 decree (reported in the text above) by Russian President Vladimir Putin.

Dzhemilev was asked whether the fascist and rightist parties in central and western Ukraine might be a threat to the Tatars in Crimea. He said there are no parties in the Ukrainian parliament that might be such a threat; all of them, he said, are united in their respect for Tatars and their willingness to give Tatars “all sorts of support”. Any one of them, he said, is “ten times more democratic” than Vladimir Putin’s party and government.

[2] The 1991 referendum was held on January 21 in the Crimean oblast (region) of the Ukrainian Soviet Socialist Republic. Voters were asked whether they wanted to re-establish the Crimean Autonomous Soviet Socialist Republic, which was founded in 1922 and then abolished by the government of the Soviet Union in 1945. The proposal was approved by 94% of voters. Wikipedia [3] In an article on November 25, 2015, the Carnegie Endowment resuscitates one of the falsehoods peddled last year about Crimea, that “20,000” Crimean Tatars had left the peninsula after the secession vote in March 2014. Crimean officials say the number was 600-800, and that many of those were students with obligations in Ukraine. Meanwhile, many Crimean Tatars who were living in Ukraine prior to March 2014 are returning home due to the perilous economic conditions in Ukraine and due to fear of being drafted into the Ukrainian army. There are many Ukrainians who have moved to Crimea for one or both of these same reasons. Story here. [4] The history of the Crimean Tatars during World War Two has been debated for decades in Russia and the Soviet Union before that. The 1968 book edited by Vladimir Petrov, June 22, 1941: Soviet Historians and the German Invasion, contains excellent, supplementary material on Crimean Tatars. The book consists largely of a manuscript published in the Soviet Union by Aleksandr Nekrich in 1965 describing the German invasion of the Soviet Union in 1941. Two authoritative books on the German invasion are written by New Zealand-born, Australian historian David Stahel: The Battle of Kiev (2011) and Operation Barbarossa and Germany’s Defeat in the East (2009).

A 1997 book published by MIT Press has an extensive chapter on the history of Crimea: Managing Conflict in the Former Soviet Union: Russian and American Perspectives, edited by Aleksei Georgievich Arbatov. 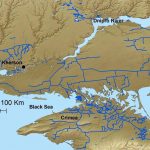 Will Crimea’s ‘energy bridge’ save it from dependency on Ukraine?Crimea, Feature Articles
Crimea is close to full electricity supply, but rolling blackouts still in placeCrimea